I wasn’t sure what to expect from the Rushing Expectation running back methodology in its first year. As frequent readers know, Expected Success Rate (eSR) is the signature metric I used and highlights the fact that not every Success Rate (SR) is created equal. Offensive lines have a direct correlation with running back success, and this was my attempt to separate these two very important factors, and yes, hopefully identify a few potential breakout players along the way.

The following heat maps display my overall results for some of the major categories in the Rushing Expectation methodology. 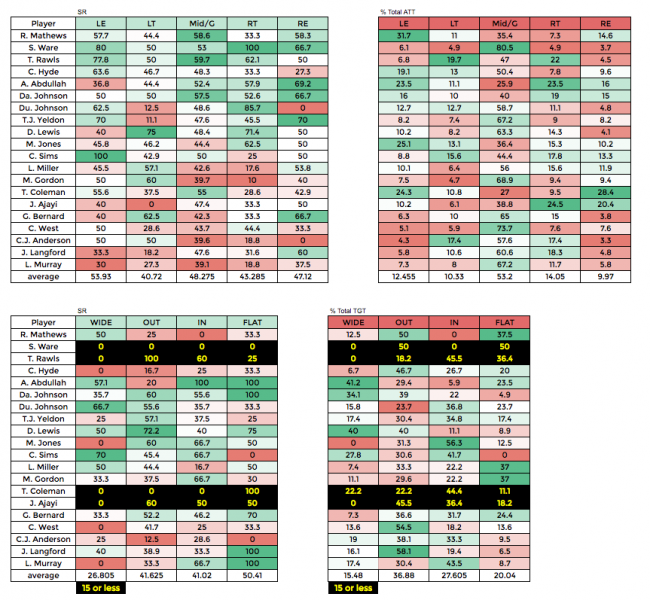 These charts should not be taken purely as gospel, but it does show where some players stood out in certain categories. As most of you are in the midst of season-long drafts, I thought it would be important after this enlightening Rushing Expectation process to highlight some of the running backs that I am bullish on and some that I am bearish on:

The overall eSR for for the Chiefs was 46.5%, the fifth-highest expectation in the league. Ware performed above expectation in his 2015 sample by 12.0% in the run game. This put him number-two overall in the rushing category for my methodology. Ware’s athletic ability is very good. He has a hard running style and his short area quickness is rare. He displays quick feet, low pad level, second effort, and rare balance, all of which are huge components of an excellent short-yardage runner. Ware is one of the best runners I have ever seen working through contact, and his pad level may be one of his strongest attributes. His elite balance through arm tackles and wraps by defenders of all sizes is truly unique. Ware is consistently looking to punish any defender who dares come near him. Ware is a player who is going to put everything he has into every play and fight for extra yardage. Ware had ridiculous efficiency numbers facing eight or more in the box, but did so on only 36% of his runs, or his overall numbers could have been even better. Against base sets, Ware's SR was 65.4%, which absolutely demolishes every other player I have charted, and is nearly 20% above the Chiefs' expectation. Ware’s floor in 2016 is significant short yardage and goal line work, but at least that gives him standalone value. He is a versatile runner that has more than proved he can be a feature back if called upon.

The overall eSR for the Buccaneers was 45.0% per rushing attempt and 44.4% eSR per target. Sims performed above expectation by 3.9% in the run game and 16.7% in the passing game. His efficiency in the passing game was fantastic -- he finished second highest of my initial 20-player sample. Sims was top-five in regards to overall performance above expectation, which combines his per-attempt and per-target data. He has the size of a feature back, but more impressively, Sims has elite mental processing skills, and football intelligence that is truly unique. He is not a flashy player by any means, but sees the field extremely well and recognizes penetration fast enough to help his quarterback consistently in the passing game if he senses danger. Sims has standalone value even with Doug Martin in the picture, but if Martin goes down, Sims has Devonta Freeman-type upside in 2016.

Abdullah was phenomenal down the stretch last season once new offensive coordinator Jim Bob Cooter took the reins in Week 8. The overall eSR for Detroit running backs was 41.1% per rushing attempt, which was 22nd in the league and well below the NFL average of 44.3%. The Lions were equally unimpressive in pass protection. Abdullah performed above expectation in his 2015 sample by 10.8% (fifth overall) in the run game and 16.1% (third overall) above his eSR in the passing game. This was a combined 26.9% above expectation cumulatively, number-one in my initial 20-player sample. Oh yeah, he did that in a “disappointing” rookie season. Abdullah’s displays elite balance and unique athletic ability. His proficiency at bending runs at top speed is impressive. Abdullah has the hip flexibility to keep downhill at sharper angles than most backs. He annihilated the rest of the pack regards to yards before contact, averaging 7.7 yards per attempt, a full 1.7 yards per attempt better than my sample average, and 0.8 better than the next closest player, Tevin Coleman.

The overall eSR for Mathews and the Eagles was 37.5% per rushing attempt, the third-lowest in the league. The good news is the run blocking should vastly improve in 2016 with the addition of right guard Brandon Brooks. Mathews performed above expectation in his 2015 sample by 18.6% in the run game, number-one overall in my entire 20-player sample. There are some players that run hard and don’t know how to play any other way, and Mathews is that type of back. He runs like the sidelines are lined with lava, often times refusing to go out of bounds and avoid contact. Mathews’ competitiveness is admirable in battling for extra yardage on every play. He displays rare athletic ability and very good explosiveness, which complements his above average mental processing skills and good instincts. Injury concerns will seemingly always loom over Mathews (he’s played a full season just once in his six-year NFL career), but the upside and excitement surrounding him as a potential elite fantasy option when healthy is not at all outlandish. If anything, Mathews is still highly undervalued.

Continue reading for three more bulls and three Bears, and where you should draft them.