Notes: Touches for running backs are calculated by adding carries and targets.

Lawrence continued his streak of disappointing games as the Jaguars dropped their 7th straight game. He should definitely not be rostered for the fantasy championship next week, especially given that the Jags have a tough matchup versus the Patriots.

Wilson showed out in the Jets-Jags Tank Bowl this weekend, having two total touchdowns including this 52-yard scamper:

It’s encouraging to see Wilson flash some of the upside that made him the #2 overall pick of this year’s draft. However, he’s still not nearly reliable enough to be started in the fantasy championship, especially since the Jets take on the Bucs next week.

Jimmy Garoppolo suffered a UCL tear in his right thumb that will likely keep him out for the rest of the season, meaning that Lance will presumably start for the 49ers against the Texans next week. In Lance's only full game as a starter in Week 5, he ran for 89 yards on 16 attempts, adding 192 through the air. Pair this dual-threat capability with a soft matchup, and Lance should certainly be picked up ahead of championship weekend (given that it's the last week, don't hesitate to use the rest of your FAAB budget on him). If your current QB starter is added to the COVID list or gets injured this week, Lance would be a viable fill-in option.

Fields missed this week’s game with an ankle injury as Nick Foles led the Bears to a victory. Given his injury issues and inconsistency, Fields shouldn’t be started next week.

Mac had a horrible game against the Bills this week, throwing two picks and completing less than 50% of his passes. He’s thrown just 18 touchdowns this whole season and isn’t worth rostering for the fantasy championship game.

Harris had a bounce-back game this week, totaling over 100 scrimmage yards in the Steelers blowout loss. He still leads all running backs in touches and is a surefire RB1 for the last week of the fantasy season.

Javonte’s fantasy day was bailed out by a one-yard touchdown, but he was still a bit of a disappointment. I’d still be starting him as a low-end RB2 in the fantasy championship, but certainly taper your expectations for him.

Carter was phenomenal on Sunday, rumbling for 118 yards on 16 touches. It looks like he’s fully recovered from the injury that kept him out from weeks 12 to 14, and sees enough volume to be FLEX-ed next week despite a difficult matchup against Tampa Bay.

Chuba was a huge let-down for fantasy managers who started him this week, getting just 0.9 points. Given the struggles of the Panthers' offense, Hubbard isn’t worth starting next week versus the Saints, who have allowed the 4th least points to fantasy running backs this year.

Rhamondre missed Sunday’s game as he was placed on the reserve/COVID-19 list. He’s an RB3/FLEX for the fantasy championship next week.

Mitchell missed his third straight game on Thursday night due to a lingering knee injury. However, despite the missed time, if Mitchell is able to return for Week 17 he’d immediately become a top-24 running back option—the 49ers play an atrocious Texans team next week, and in the three weeks before his injury, Mitchell was 4th in the entire NFL in carries.

Fantasy managers that were able to survive Chase’s 0.8 point stinker in Week 15 were immensely rewarded this week. The former LSU superstar racked up 125 receiving yards on 10 targets as the Bengals dominated the Ravens. Chase is the overall WR6 on the season and should be treated as a top-10 option at the position for the fantasy championship.

Waddle continued his fantastic rookie season on Monday Night, accumulating 92 receiving yards and a touchdown en route to a top-10 finish on the week. He's the clear number one option on the red-hot Dolphins (46.1% target share!) and is a surefire top-20 option at the position for the fantasy finals next week—Since Tua Tagovailoa returned from injury in Week 7, Waddle is the overall WR5 in fantasy points per game.

Smitty had his first good fantasy performance in over a month, totaling 80 receiving yards and a touchdown in the Eagles blowout win over the Giants. The reigning Heisman Trophy winner has been a bit inconsistent in his rookie season and likely isn’t much more than a low-end PPR FLEX option for the fantasy championship.

Toney made an uneventful return from injury this week, finishing with just 28 yards. The Giants offense is quite frankly horrible, rendering Toney un-startable for the last week of the fantasy season.

Bateman continued his up-and-down rookie campaign, having one of his better weeks as he caught his first career touchdown. He still doesn’t see nearly enough volume to be relied upon in the fantasy championship and should be left on the bench.

Moore has missed the last three weeks due to a quad injury but has a shot at returning from IR this week. If he does come back, he’d be a risky FLEX option as we likely won’t know if his workload is changed at all due to the injury.

There are three players with more fantasy points than Amon-Ra St. Brown in the past four weeks—Cooper Kupp, Tee Higgins, and Justin Jefferson. In the same timespan, only Kupp and Jefferson have more targets. Suffice to say, the Lions rookie has been on an absolute tear lately, proving himself to be one of the “league-winners” that fantasy managers long for. 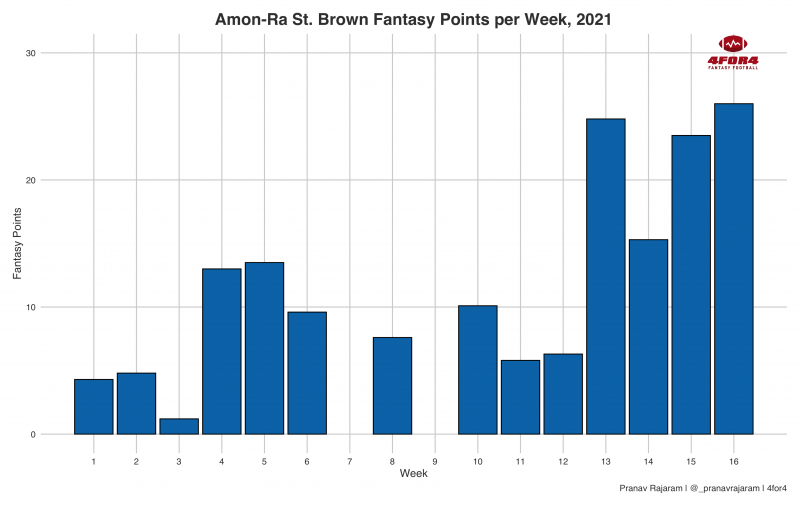 This insane volume and production make St. Brown a legitimate top-24 option at the position for the fantasy championship next week. He’s produced regardless of who is under center for Detroit, and if for whatever reason he’s not picked up in your league already, don’t be afraid to spend the rest of your FAAB budget on him.

Pitts finally rewarded fantasy managers who held on to him for so long, going over 100 receiving yards for the first time since Week 7. Even though Pitts might not have reached his full upside in his rookie season, he’s still 3rd amongst all tight ends in targets this year and a TE1 in Week 17. It doesn't feel like it because of the lack of touchdowns, but Pitts already has the 2nd most receiving yards by a rookie tight end ever.

Freiermuth missed Week 16 due to a concussion. If he’s cleared to play next week, he’d continue to be a low-end TE1.