Any time you are drafting in the middle portion of the draft, you will face certain benefits and limitations. Especially in a league with only 10 teams, you will rarely fall victim to positional runs since you never have to wait too long between picks. Of course, that also means that it will often be difficult to predict exactly what each team will do with their two picks before it gets back to you. From a player-specific standpoint, the six hole could prove to be one of the most critical spots to draft from since the potential holdout from Ezekiel Elliott could see him fall there. The decision whether or not to pull the trigger on a potential league-winner that may miss a large portion of the season, if not all of it, could swing league fortunes.

In this article, I will walk through a perfect draft from the sixth spot in a 10-team ESPN Half-PPR league. Each pick was optimized using projections and value-based rankings from the 4for4 Draft Hero tool. 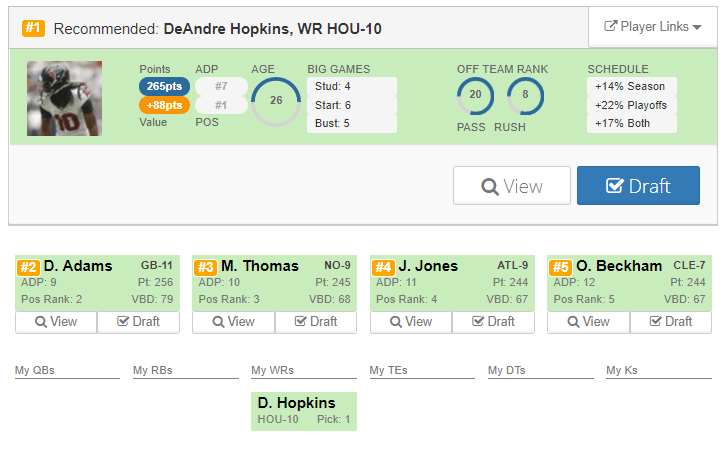 In a half-PPR league, it could be argued that a top-tier wide receiver here isn’t a slam dunk over the available running backs like it is in a full-PPR league, but once the top-four backs are off the board, I prefer the reliability of a dominant pass-catcher. There are seven or eight receivers that have the overall WR1 in their range of outcomes, and while I’ve typically been drafting Odell Beckham as much as possible, there may not be a safer player in football right now than DeAndre Hopkins.

The Texans number one receiver is one of two players with at least 150 targets in each of the last three seasons and is tied to one of the best young quarterbacks in the league in Deshaun Watson. While touchdowns are highly variable, Hopkins has proven his upside, finding the end zone at least 11 times in three of the last four seasons.

Even though this is a half-PPR league that only requires two starting receivers, there is enough running back value available in the middle rounds that it isn’t necessary to force any pick this early simply because of positional need. With Antonio Brown no longer in Pittsburgh, Smith-Schuster is the clear number one in an offense that led the league in pass attempts last season. Even if the Steelers dial back the passing, JuJu is in a situation where leading the lead in targets isn’t out of the question.

I’m usually not one to take an early-round tight end but a 10-team league lets you take some more risks with roster construction since there is a deeper talent pool available than in a 12-team league. George Kittle managed to turn in a TE3 season last year without the services of Jimmy Garoppolo for most of the season. With San Francisco’s starting quarterback now healthy, the 49ers should be slightly more pass-heavy with Kittle remaining the primary target. With a suddenly talent-rich offense in Philadelphia, look for Kittle to take over the number two spot in fantasy at his position in 2019.