Drafting at the back end of the first round virtually guarantees fantasy football owners will miss out on a premier running back. But drafting near the first turn might be a blessing in PPR leagues—because the first round is so running back heavy this year, wide receivers usually drafted in the middle of the first round are frequently falling to the second round. Of course, one of the drawbacks of drafting near either turn is that it leaves owners vulnerable to positional runs and sometimes forces drafters to reach on their favorite players.

An advantage of drawing the nine spot is the opportunity to implement game theory in drafts. Assume that you are in the ninth round and trying to decide between a quarterback and a tight end. Before deciding, take a look at Team 10-12's rosters. If those owners have already picked a tight end, you can draft the quarterback with fairly high confidence that your tight end will still be there in the next round

In this article, I will walk through a perfect draft from the nine-hole in a 12-team Yahoo PPR league. Each pick was optimized using projections and value-based rankings from the 4for4 Draft Hero tool. 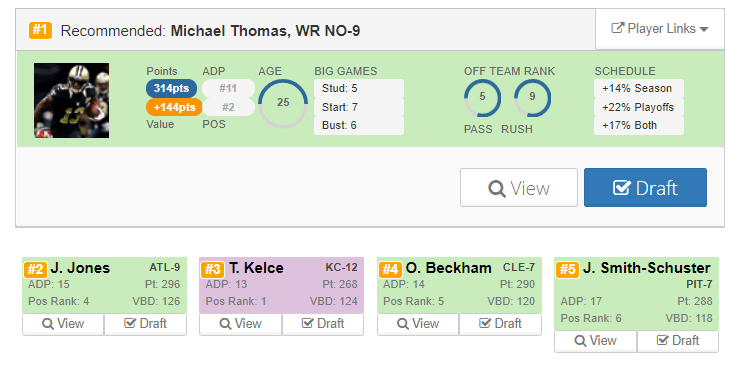 After the top four or five running backs are off the board, I’m looking to draft any of the wide receivers available at the back end of the first round, and Draft Hero agrees—this is especially true in a PPR league that requires you to start three at the position. There are seven or eight receivers that not only have legitimate overall WR1 upside but that have the top overall non-QB scorer in their range of outcomes. My favorite of the group is Odell Beckham.

For a deep dive on why I’m so high on Odell, check out this article. In short, Beckham has been one of the most efficient receivers in the league with one of the least efficient quarterbacks throwing him the ball. Not only will OBJ get an upgrade at quarterback but he’s going to be paired up with one who matches his strengths, under a coach that wants to air it out. Owners are often wary of receivers switching teams, but aggressively pursuing the Browns’ new receiver, especially if you can take him ahead of the consensus top layers at the position, is my default strategy in this portion of the draft.

With only one receiver coming off the board in the next six picks, two potential first-rounders in Julio Jones and JuJu Smith-Schuster were still available here. This particular format favors dominant pass-catchers and when I’m drafting at the back half of the first, I’m almost always starting WR/WR. After the top few backs, the safety of the best wide receivers is unmatched and I like enough middle-round running backs to warrant this start, especially when I know I won’t have to fill a flex spot.

Only three players have seen more total targets than Julio over the last three season and of the players with at least 300 targets in that span, Jones is one of two averaging more than 10 yards per target. Atlanta was one of the best passing offenses in the league last season and Dirk Koetter returns as their play-caller for 2019. In three season calling plays for the Falcons, Koetter’s offenses ranked no lower than second in neutral passing rate.

Full transparency: this was the most uncomfortable pick for me in this draft and the spot that I’ve struggled with the most this summer when drafting in this area. Often times, I will continue to pound the wide receiver position when I have a flex spot available to me, hoping to land four top-24 receivers, which can upend an entire league. However, with no flex spot, taking another receiver here may make me less inclined to pick up some of my favorite receiver values in the coming rounds.

Kerryon Johnson was the top suggestion here but I prefer to have players attached to potentially explosive offenses. Aaron Rodgers could be in for a bit of a bounce-back season and while Aaron Jones doesn’t catch as many passes as I’d like from my first running back, he could prove to have as much touchdown upside as any player at his position.