Well, we made it.

New England Patriots running back Dion Lewis is player #20 in my initial Rushing Expectation sample. Thank you to everyone that has followed along and supported my new running back methodology this offseason. It has been a rewarding and enlightening process, and I hope it has helped bring some clarity surrounding these players for 2016 and beyond.

Before news broke that Lewis would be having a second procedure involving his ACL tear from last November, I was extremely bullish on Patriot running back this offseason. I wrote about Lewis as a top zero RB target if healthy and he most definitely would have been one of my guys after analyzing the overall results of the Rushing Expectation project.

Though the procedure was considered “relatively minor”, the aforementioned second surgery on Lewis’s knee sent him straight to the Patriots PUP list. He will not be eligible to return until Week 7.

Lewis being placed on the PUP is a huge blow to fantasy owners drafting him in the fourth or fifth round of fantasy drafts. It is still unclear if Lewis will even be available in Week 7. It is entirely possible a return to field after the Patriots Week 9 bye may be more realistic, but that is pure speculation at this point.

On a lighter note, in this profile I intend to highlight the ridiculous season Lewis was having for the Patriots last year before he was injured. From there, hopefully it will be easier to make an informed decision as to whether you should value him as a buy-low candidate in dynasty leagues, or even a late-round stash in season-long leagues (bench spots permitting).

Lewis earned the valuable “Shane Vereen role” for the Patriots last season, beating out players like Travaris Cadet, James White, Brandon Bolden, and Tyler Gaffney. Lewis is a far better runner between the tackles than Vereen. Lewis signed a two year extension midseason and through the first eight weeks was easily the Patriots best back. He averaged 12.8 touches for 95 yards and 0.67 touchdowns on a per game basis, which ranked him #10 and #9, respectively, in standard and PPR leagues at the time.

Although there is no guarantee Lewis will play this season, football fans should hope he can get back to 2015 form. Before I frame my strategy for Lewis in 2016, let’s take a look at his 2015 Rushing Expectation sample, starting with Attempts and Targets: 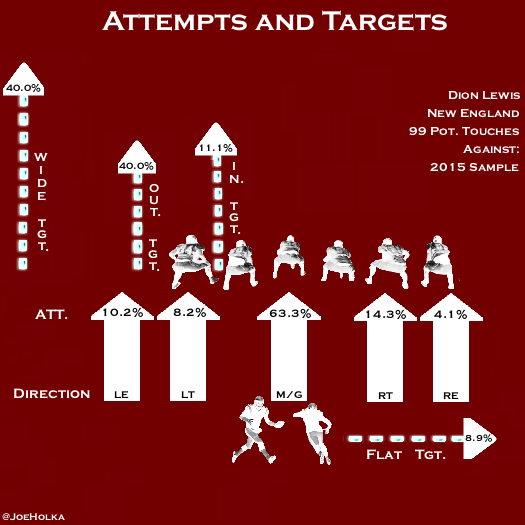 Lewis has elite athletic ability and is a unique combination of agility, quickness, balance, and change of direction. He is an effortless runner who sets up defenders well and can press tight spaces behind the line of scrimmage.

Lewis has elite mental processing skills with unique instincts, football IQ, and reaction time. He is absolutely dynamic in the open field, and has underrated breakaway skill and feature back viability despite his size disadvantages.

While looking at Lewis’s run distribution, it is clear he is more than willing to work through the middle and between the tackles. He ran through the middle on 63.3% of his carries, which is tied with Latavius Murray for sixth highest in the initial sample.

Lewis has rare receiving ability and shows solid versatility and timing through various areas of the field. He lined up wide 40.0% of the time -- more often than any running back in my initial sample besides Ameer Abdullah (57.1%). Lewis also saw targets on outside routes 40.0% of the time, second highest in my sample behind Abdullah (41.2%). Lewis catches the football with his hands and works back to his quarterback extremely well when he senses trouble.

It should be clear already I am a big fan of Lewis’s real football talent from a film evaluation perspective. It’s hard not to be. The question is, how far did he exceed expectations in 2015 from an efficiency or metrics point of view? 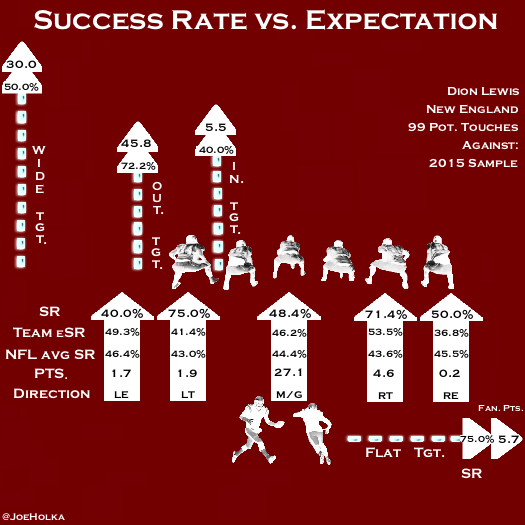 The overall eSR for Lewis and the Patriots was 46.8% per rushing attempt, tied for second best in the league according to Adjusted Line Yards and well above the NFL average of 44.3%. New England was equally impressive in pass protection, boasting the second best overall expectation of any team at 46.2% eSR per target.

Per attempt, Lewis was most successful to left and right tackle, averaging an absurd SR of 73.2%. However, runs behind the left and right tackle represented just 22.5% of his total rush attempts. Lewis finished above his team expectation through his largest sample size, the middle, by 2.2%, which was much more in line with my sample and the NFL average.

Lewis was the fourth most efficient player in the passing game from my sample (players with 15 or more targets). He found the most success with targets in the flat (75.0% SR), but finished above team expectation in all areas but the inside, where finished just 1.0% below sample average.

Split out wide, Lewis tied with Lamar Miller and Ryan Mathews (50.0% SR), and trailed just Charles Sims, Duke Johnson, and the aforementioned Abdullah per target in this area of the field.

It’s quite clear even when taking into account great run blocking that Lewis’s efficiency numbers were immaculate. Let’s check out his overall Rushing Expectation results to see if there is something beneath the surface that can help explain his success. 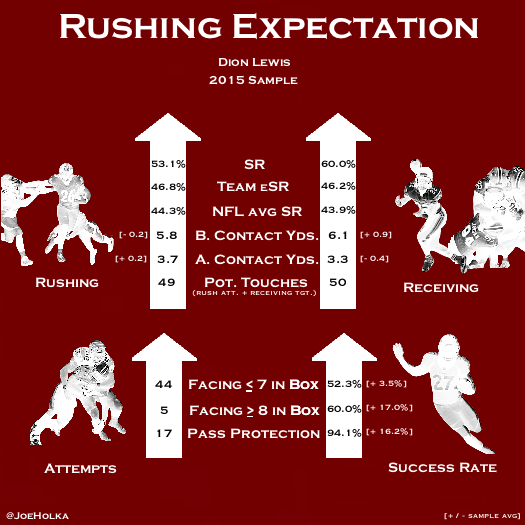 Behind what was statistically a top-four run blocking offensive line according to Football Outsiders' Adjusted Line Yards, Lewis performed above expectation in his 2015 sample by 6.3% in the run game and 13.8% in the passing game.

Lewis is a fantastic combination of rare burst and acceleration. Pair these skills with his very good vision, ability to press creases behind the line, and even at his size, and Lewis is far too good between the tackles not to be taken seriously. He has very good burst and attacks lanes to get into the second level.

Lewis's unique quickness is a strength of his game. It allows him to pair moves together in the open field. He stacks moves better than nearly every back I have charted so far, and is very good at making the first defender miss. His elusiveness is elite, both behind the line of scrimmage and in the open field. Although his long speed is good, Lewis does lack a third gear. What he does have is enough initial acceleration to get to the edge effectively -- at least from what I have seen.

Lewis finished in the middle percentile in regards to yards before contact. I weigh this stat extremely high in my overall analysis, as I have found elusiveness behind the line of scrimmage to be much more predictive in elite production than yards after contact.

Yards after contact can be an extremely misleading stat in my opinion. That said, Lewis was just barely above average in yards after contact, 0.2 yards more per carry than the average. He has finishing ability and balance through contact, which is most likely attributed to his ability to gain leverage at the point of contact. Lewis initiates contact often for a smaller back and can drive defenders back, though he has merely average strength.

Lewis faced eight or more in the box on the lowest percentage of total runs of my 20-player sample (tied with Jay Ajayi at 10.2%). The difference is Lewis was one of the few who actually had a higher success rate against loaded boxes than against soft ones. Though a small sample size, it still says a lot about his rare vision in the backfield to find lanes even through high traffic and sub-optimal situations. Lewis tied with Sims for the highest success rate in the sample against eight or more in the box (60.0%). Lewis is a mature runner who does a good job pressing running lanes before he reaches the line of scrimmage. He finished well above sample average by 17.0% and 16.2% against seven or less in the box and eight or more in the box, respectively.

Being an asset in pass protection is an undervalued part of Lewis’s game. He is a very good blocker and was an asset on a higher percentage of total opportunities than any other player in my sample (94.1%).

The expected timeline for Lewis to return after the knee surgery “cleanup” procedure is 8-10 weeks. Doctors are cleaning out some loose particles and it is believed to be relatively minor, all things considered. Lewis’s injury history as a whole is significant. He has missed time for hamstring and abdominal injuries, and was also on the injured reserve the entire 2013 season with a fractured left fibula.

LeGarrette Blount appears to have a stranglehold on early down work and ball control role when New England is ahead and killing the clock. He has scored 24 touchdowns in 37 career games as a Patriot but has also worked through injuries of his own. White will take over as the primary pass-catching running back but offers little between the tackles and far less versatile than Lewis. People are understating the significant impact the versatility of Lewis had for Blount -- White is a big downgrade in this area.

The Patriots did not abandon the committee approach when Lewis was going off last year like the common narrative suggests. Lewis had a significant role, but he only lead the team in touches twice and it was in Week 1 and 2. It’s noteworthy that Lewis totaled 258 all-purpose yards in these two games and regardless of the injury risk, I still believe he may even have feature back potential in the NFL over the long term.

If Lewis does return in 2016, a decreased workload from what we saw last season is entirely possible if the Patriots want to preserve their 5-foot-7, 193-pound running back for the playoffs. The same thing happened in 2015, as his last five games he saw a reduced carry volume from the start of the year, but his volume in the passing game kept him afloat for fantasy purposes.

Speaking of staying afloat, Lewis was a huge factor in the red zone last season. Tom Brady leaned on Lewis heavily in close, targeting him five times last season. He caught three for two touchdowns. Though in theory, Blount limits Lewis's touchdown ceiling, all four of Lewis’s touchdowns were scored from inside the red zone in 2015. He also saw 13 touches from inside the 20 in seven games played. If anything, I think we've underestimated the touchdown upside for Lewis.

Lewis is a good bet to be in scoring position a ton in the Patriots offense. Still 26 years old, now may be the best time to buy Lewis in dynasty leagues. Even if he returns and his 85% of what we saw last season, his PPR RB1 upside is very real. In shallow bench season-long leagues it may be tough to pull the trigger on Lewis in drafts, which totally understandable.

For the less risk averse fantasy player like myself, I am totally okay rolling with a White/Lewis combo late in drafts. It may not be the popular choice, but an elite talent like Lewis is exactly the type of player I am willing to stash if the price is right.