I spend a good amount of time asking people a lot smarter than myself in the industry who I should profile next with Rushing Expectation. This is probably a lot better than my former process of writing up whoever I felt like that day, I think. Who knows? Point is, Matt Jones is almost always a name that comes up.

Literally no one knows what the hell to do with this guy in fantasy drafts this year -- kind of like most days I have no idea who I am going to write up for this series. Jones is just a guy, and he’s there, so you might as well think about drafting him at some point. I spent about eight hours charting him for my initial 20-player sample, so I might as well write him up at some point.

On the surface, Jones is prime candidate to disappoint due to his perceived lack of inefficiency and overall talent. Spend five minutes on Google and you will find plenty of reasons to hate him.

Is it possible Jones is the non-sexy pick we are all completely overthinking right now? I have no idea, but I am open to the possibility.

Head coach Jay Gruden has had a 20-touch back in 38% of his games with Washington. Jones is currently the only 20-touch candidate on an offense that is projected to be surprisingly good if he can just stay out of the doghouse (he fumbled five times in 2015 losing four). For what it’s worth the team seems committed to helping him improve in this area, which is a lot better than them assuming its imprinted in his DNA.

Alfred Morris has moved on to Dallas and the Redskins have lost a cumulative 244 running back touches from last year’s roster.

With that being said, the Redskins didn’t even draft a running back until the seventh round, and though they considered it, they didn’t add any talent in free agency either. There comes a point where you have to stop assuming Jones is dodging bullets and realize the team may not be trying very hard to shoot him.

So far in camp, the Redskins are certainly using Jones as their top runner. Washington’s offensive coordinator Sean McVay has even said, “he’s even got the skills and traits you’re looking for in that every down back.” Whether or not the community agrees, the guy calling the plays is what matters, so there’s that.

The biggest knocks on Jones in 2015 were his lack of efficiency against base defenses and the fact that his few highlight reel plays came from a small sample size of receptions. Moving forward, is this enough to move us off of a 6-foot-2, 231-pound back in a phenomenal situation?

A feature back role is right there for Jones; and opportunity is everything in professional sports. Lets take a look at his Rushing Expectation profile and see just how large the bust potential truly is in 2016, starting with Attempts and Targets: 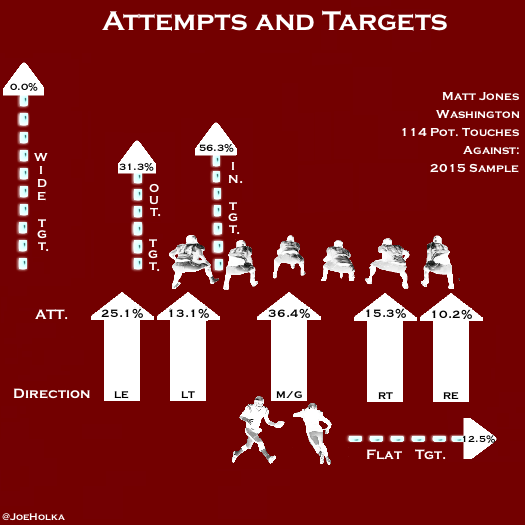 Jones has above average perimeter quickness for a back his size, which is highlighted by his relatively even run distribution. Most backs have a huge percentage of their runs coming through the middle lane, but Jones is content to bounce a lot of plays elsewhere. There are times Jones shows a lack of discipline from designed middle plays, but his burst is good enough to beat the first level of tacklers consistently.

Jones has average vision but just a solid ability to find lanes and maximize run creases. He is content to grind and bury his head into blockers far too often but avoids contact in the backfield well before he gets there.

Jones’ sample size of just sixteen targets shows that he was used sparingly last season in the passing game, but when he was targeted it was overwhelmingly on inside and outside routes (87.6% of the time), rather than in the flat or out wide. Jones has flashed solid ball skills and average hands when called upon at both the NFL and collegiate level.

While offensive lines show a direct correlation to running back success, a running back's skill still plays a part. Lets look and see how Jones performed in comparison to what was expected behind this Redskins offensive line. 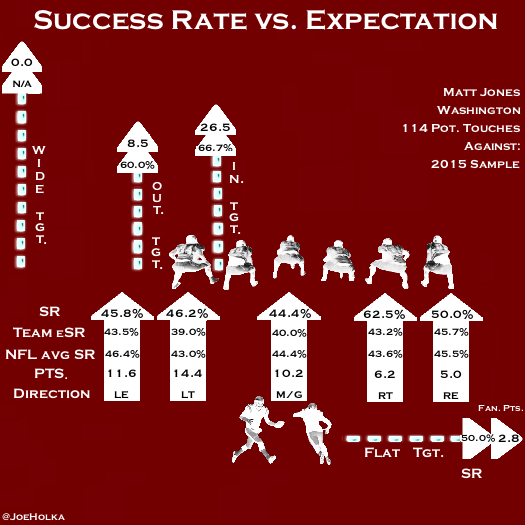 The overall eSR for Jones and the Redskins was 41.4% per rushing attempt, while the NFL average is 44.3%. Washington hovered around the NFL average in pass protection as well with an expectation of 42.7%, just 1.2% below average.

Surprisingly, Jones performed above expectation in all five running lanes, as well as each lane in the passing game.

Per attempt, Jones was most successful through the lane behind the right tackle with a SR of 62.5%, though it was only 15.3% of his total rushing sample size.

Johnson was right at the league average and 4.4% above his team expectation through his largest sample size on the ground, the middle lane.

Per target and in a limited sample size, Jones had very good success from an efficiency standpoint through all three lanes. His biggest plays came through the inside lane where he charted a staggering 26.5 fantasy points on just nine targets and a 66.7% SR.

For what it’s worth the only players (with significant sample size) from my initial group with that type of efficiency through the inside lane per target were Charles Sims (66.7%), Latavius Murray (66.7%), and David Johnson (55.6%).

Let's jump into the overall Rushing Expectation results from Jones and dig a bit deeper into some film evaluation. 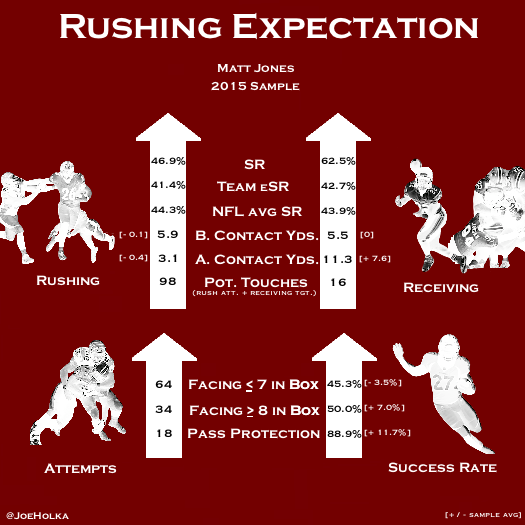 Behind what was statistically the 21st-ranked run blocking offensive line, Jones performed above expectation in his 2015 sample by 5.8% in the run game. This put him squarely in the middle of my initial 20 players as far percent above or below expectation, but was encouraging considering the narratives surrounding Jones' extreme inefficiency.

When offensive line play is taken into account, Jones was actually more efficient than fantasy darlings like Lamar Miller, Giovani Bernard, and C.J. Anderson, just to name a few.

Again keeping the 16-target sample in mind, Jones’ target efficiency put him number-one overall in my entire 20-player sample, at 19.8% above expectation per target. I am not trying to sell you that Jones is the biggest receiving threat in my sample, which would be completely asinine; I am saying his efficiency in limited opportunities is noteworthy.

Elusiveness behind the line of scrimmage is an extremely underrated -- but prevalent -- ability among the league's best feature backs. Jones was closest to the sample average as you could be in this category, but he wasn't below average, if you are reading between the lines here.

Jones does have below average mental processing skills. However, he can be especially shifty while showing above average agility en route to line of scrimmage. Jones shows average creativity once he gets to the second level, and his average vision limits his ability to maximize his great physical tools.

After first contact, Jones averaged just 3.1 yards per attempt. While he shows good balance through contact, his pad level has room for improvement, as defenders are often lower than him at the point of contact. Jones does have above average power, and is more than willing to deliver hard hits, but that should be expected at his size.

It is very puzzling that Jones actually performed better against eight or more in the box than against base sets. The argument that his efficiency was lacking against base sets is valid; he was a full 3.5% worse than my sample's average. What is important is the fact that against eight or more in the box, Jones was actually 8.6% above his overall eSR -- and a full 7.0% above my sample average.

Jones has taken some heat for his pass protection skills, but this could be taken as a positive in the same way as it was for Spencer Ware. The fact that Gruden is talking about this at all means Jones is being considered as more than a two-down option. I found Jones' pass protection to be above average, though he does make some questionable cut block attempts when he should stand up and use his size. Jones shows aggressiveness against the blitz that a lot of backs in the league could learn from.

Though not elite or even rare in any aspects of his talent, Jones’ Rushing Expectation results skew towards the hate going a bit to far for a back with this level of opportunity. Jones could legitimately be a 300-touch; double-digit touchdown type player of he proves three-down reliability.

Though Jones' range of outcomes is admittedly large, his level of competition is largely unimpressive. Though each player has their appeal, neither Chris Thompson or rookie Keith Marshall really pose much of a threat to Jones’ feature role.

Thompson is a passing down specialist -- think a much lesser version of Darren Sproles -- and Marshall posted one of the best speed scores at the combine ever but has struggled to stay healthy and is already battling an injury in camp. Both Thompson and Marshall could have larger roles if they can improve in pass protection and stay healthy, but those are both huge ifs. Marshall could be a good dynasty stash down the line, but will not be enough of a factor where he should be effecting Jones’ ADP much in 2016.

A much bigger obstacle to Jones than his competition could be how difficult the Redskins schedule is expected to be in 2016 -- they will face both the NFC West and NFC South. That is something that is not carrying enough weight with many projecting this offense.

On a cumulative basis, a good majority of Jones' fantasy points in 2015 came from a few big plays in the passing game, but his lack of efficiency is overblown if you look past the raw unreliable yards per carry numbers.

Jones’ workload alone makes him an enticing pick at his current ADP, and Washington has also shown confidence in him in the red zone. He was given 27 of 66 carries in the red zone last year even in a more limited role. If he can improve on those numbers this year his touchdown upside could provide more upside than people think if the offense remains productive.