Going into Week 3 of last season, a second-year running back with a career 3.3 yard per carry average was making his first career start against a defense that allowed negative two rushing yards to running backs the week before. Naturally, 93.3 percent of entrants in the FanDuel Sunday Million tournament didn't roster him -- but they should have. And not because he went on to rush for 141 yards and three touchdowns in that game. This is about process. You see, the stats I mentioned above are largely irrelevant. Here's what I actually wrote about him going into Week 3:

I admittedly don't have much confidence in [his] rushing ability, as he's managed only a 3.3 per-carry average on 87 career totes. However, his projected volume, receiving game and red zone involvement, and the fact his team is a favorite all fit the profile of a strong RB play.

In case you didn't realize, I was talking about Devonta Freeman, and if you were a member of that 93.3 percent, your secret is safe with me.

I was obviously wrong not to have confidence in Freeman as a runner, but the larger point is that I still based my decision of whether or not to use him in DFS on the correct factors.

After reading this article, you'll understand why Freeman would have been a strong play even if he didn't go off that day. I’ll show you the makeup of a valuable DFS running back, how to identify the top values every week and how to tailor your approach at the position to whether you're playing in a cash game or a tournament.

Many a football analyst has at one time or another succumbed to the perils of overanalyzing yards per carry, a metric which explains past efficiency but offers little predictive value. In fact, it takes nearly 2,000 carries for a running back's yards per carry to stabilize.

Below are the correlations between each running back stat and fantasy production. Pay special attention to the bottom five on each list.

Of course, you want the backs you select to be efficient as well, and all things being equal, you'd take the more efficient back, but volume should take precedence.

The importance of touches isn't surprising considering yardage accounts for roughly 75 percent of the average running back's fantasy production. Your best bet is to count on yardage steadily accruing via an ample supply of touches, rather than through unpredictable chunk plays; runs of 20 or more yards happened just 0.62 times per team, per week, in 2015.

If you're looking for a high ceiling play at running back, nothing beats an abundance of touches. Consider the following:

The 18-touch mark (arbitrary as it may be), also provided a reliable floor: running backs who received 18 or more touches scored 10 or more DraftKings points at an 85 percent rate in 2015. As a starting point for finding value at running back, you can simply identify which backs in a given week have the most projected touches per dollar.

The Importance of Goal-Line Carries

In contrast to touches, there's no such thing as a touchdown floor for running backs: only seven scored a touchdown in even half of their games in 2015. With few exceptions, a goose egg in the touchdown column is the most likely box score outcome for a running back.

Of course, DFS is all about pinpointing those exceptions. Touchdowns are hard to come by, but to be a winning DFS player, you need to maximize them in your lineup. Whereas trying to predict the occurrence of long runs is generally a money-burning endeavor, it is at least somewhat possible to maximize touchdown odds. How? By ensuring the running back you select is his team's primary ballcarrier near the goal line: 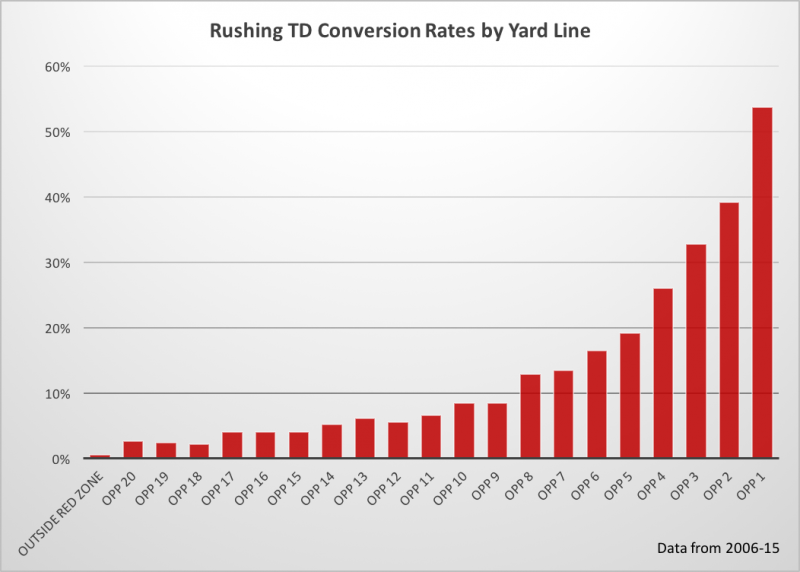 Outside the red zone, the odds are less than one percent that a rushing attempt will go for a touchdown.

Make no mistake, goal line opportunities are unpredictable and rare: offenses average just over one attempt per game inside the 5-yard line and are held without a single attempt inside the 5-yard line in roughly a quarter of their games. However, even though you can’t predict exactly when (or if) goal-line opportunities will arise, you can, to some degree, predict which running back will be on the field when it does.

Game Script Can Make or Break a Running Back

When is volume and touchdown potential at its peak for a running back? When his team is in positive game script. A high amount of rushing attempts is usually a byproduct of winning -- not a cause of it: 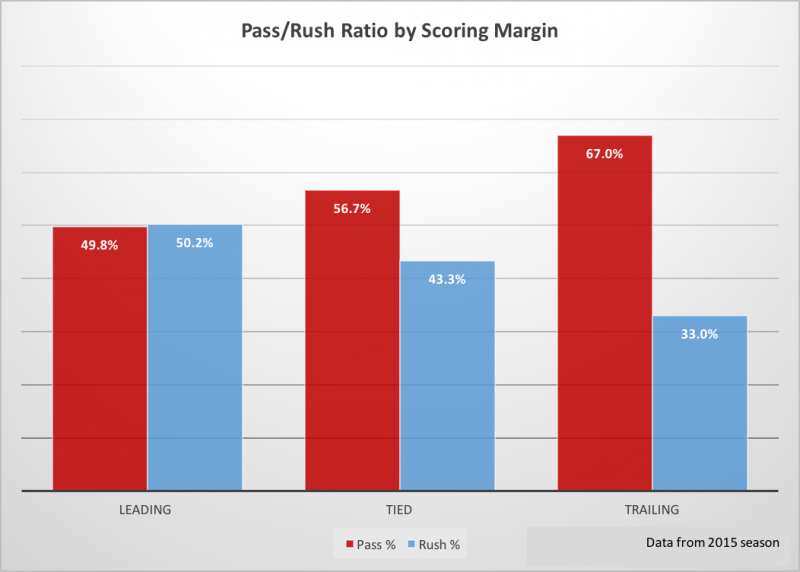 Negative game script can result in a reduction in opportunity volume that can torpedo a running back's value -- especially if he is a back that frequently gets removed on passing downs. (Negative game script does theoretically benefit backs that are receiving specialists, but most of those type of backs don't see enough opportunities to be viable plays beyond tournament dart throws.)

So it's obvious you need to target running backs on teams projected to be leading, and that's where the Vegas lines come in. Vegas oddsmakers have been sufficiently accurate with their point spreads to where there's a discernable difference between rushing stats for favorites compared to underdogs (and home teams compared to road teams):

The touchdown disparity is major, especially over a sample of over 1,500 games. (In Freeman's three-touchdown breakout against Dallas, the Falcons closed as one-point favorites on the road.) Here's how running backs playing on home favorites measured up in terms of DFS value in 2015: 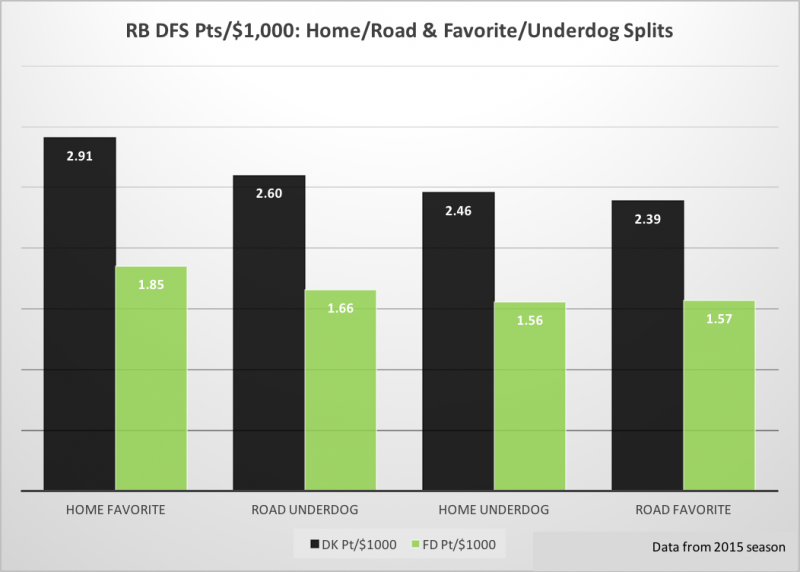 Since game script largely tells you most of what you need to know about a running back's matchup, I'd tend towards giving less weight to an opponent's fantasy points allowed at running back than at other positions. I wouldn't fade a good projected value solely because of a tough on-paper matchup (doing so would have resulted in fading Freeman in his aforementioned monster game, for example).

Since the role and quality of running backs differs from team to team (especially in the receiving game, which continues to account for more and more of the average back's production), schedule-adjusted fantasy points allowed -- rather than the raw figures -- is the optimal metric to use here.

Savvy NFL teams have begun to realize that most running backs are interchangeable, and one of the main reasons for that line of thought is that a running back's production is due in large part to his offensive line's blocking prowess. Injuries or other changes to a back's offensive line, particularly on the interior, can effect production. The same can be said for a defense's front seven.

The success of running backs when their team is a favorite may have already made this evident, but I should point out that going against a weak pass defense can enhance the fantasy outlook for an offense's running game as well. The threat of the pass usually means the defense will have to field more defensive backs and play softer fronts, which likely explains the increase in rushing efficiency for Vegas favorites.

How Injuries Impact Running Back Production

In the eight games C.J. Anderson played in 2015 where he was absent from the injury report, he averaged 13.0 DraftKings points, but in the seven games he played after appearing on the injury report, that figure fell to 6.2. Anderson's case is extreme, but injuries do have a tangible effect on running back performance, and there can be a difference between probable and questionable tags.

Roughly a 10-percent decline in production can be expected when a running back plays through an injury. As you might expect, a questionable tag has a greater impact that a probable tag. Lower body injuries are particularly detrimental, although hamstring injuries only had a negative effect when accompanied by a questionable or doubtful tag.

How to Select Running Backs for Cash Games

Minimizing busts is a priority in cash games, so you want to target three-down backs on Vegas favorites, preferably at home, whenever possible.

You're essentially trying to maximize touches via positive game script, while at the same time selecting a back that can still produce in the receiving game if negative game script hinders his rushing production.

While there's nothing wrong with deploying a stud in a great situation, there's usually no need to force a high-priced running back into your lineup -- valuable running backs can be found at any salary range:

We know touches provide a high floor, which makes cheap running backs that are taking over the starting role due to injury very valuable in DFS. Just think how crucial it was to roster cost-effective backs like Thomas Rawls, Jeremy Langford, and Charcandrick West when they were thrust into larger roles in 2015.

How to Select a GPP-Winning Running Back

Minimum cashes in a GPP are generally not sustainable -- you eventually want to hit on a huge cash to truly profit. With that in mind, below is a table of what the winners of the DraftKings Millionaire Maker and the FanDuel Sunday Million GPPs in 2015 did at running back. (Note that in the ownership column, the "1" in RB1, etc. refers to the lineup's highest-owned RB, not the ownership of the RB with the highest salary.)

Here are the takeaways: