Miami may be known for sunshine and sandy beaches, but there has been an awfully cloudy situation at running back since the Dolphins lost Lamar Miller in free agency. They made a valiant run at C.J. Anderson with an offer sheet that Denver ultimately matched, and later added veteran Arian Foster, who is coming off a significant achilles injury.

Taking both of these events into consideration, at least one thing is clear: Miami was not comfortable going to battle this year with Jay Ajayi as their primary bell-cow running back.

Ajayi has gotten the start in all three preseason games, but the offense as a whole has functioned better with Foster in the backfield. The rotation has been relatively even, but Foster has shown much more versatility and even replaced Ajayi on multiple third down and red zone situations. Ajayi’s struggles in the passing game were a big part of the reason Foster was brought in and head coach Adam Gase has repeatedly said that he is looking for a player to stay on the field all three downs.

That said, 4for4's TJ Hernandez reminds us “Cumulatively, Gase’s relative running back usage has been on par with the rest of the league (the 2015 league average for percentage of team touches by running backs was 57.2 percent), but given an offense without Peyton Manning, Gase’s Bears ranked in the top four in percentage of team touches by running backs. This large running back pie led to an offense that was able to support two backs that averaged double-digit touches per game in 2015.”

It goes without saying that Gase is a highly respected offensive mind, which is part of the reason many were so high on Ajayi at times this offseason. But does Gase prefer a workhorse back? Beat writers continue to stress the situation is moving towards an even split in the run game, with Foster receiving more targets in the passing game. It should be noted that Gase didn’t use his backs much in the passing game last year. The Bears ranked 21st in the league in running back receptions in 2015, and Chicago was a team with pass-catching specialist Matt Forte available, just like Miami now has with Foster.

Per 4for4 Senior DFS Editor Chris Raybon- “Gase’s offenses have ranked between sixth and 11th in rushing attempts in each of his three seasons as a play-caller.” So, what’s a fantasy owner to do with the Miami backfield?

Due to a large amount of uncertainty, Ajayi was a highly requested player for the 2015 Rushing Expectation sample, so I decided to try something out I don’t normally do. His 2015 sample did not hit my threshold; in over nine games played, he accumulated just 60 potential touches (rush attempts + targets) in his rookie season. The sample size of each player under this methodology is something I put a lot of thought into, you can read more about it here.

The easy thing to do would be to ignore the relevance of a limited sample size. Ajayi was just 15 potential touches behind my normal minimum threshold, after all, but it still has to be taken into consideration in Ajayi’s overall evaluation.

Let's use Ajayi’s limited 2015 Rushing Expectation sample to paint a clearer picture of his rookie season, starting with Attempts and Targets: 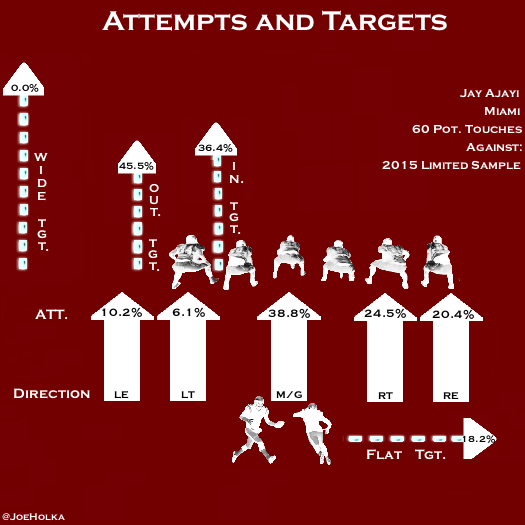 Ajayi is intense,aggressive, and at times runs with reckless abandon. He displays rare physicality in one-on-one situations and shows very good power through contact. His burst is good and his acceleration hitting holes between the tackles is above average.

But instead of taking small gains through the middle, he has a tendency to bounce things right when a defense clogs up his intended lane. These immature decisions are showcased in his running distribution above. Ajayi carried the ball through the middle the fifth-lowest percentage of the time of any running back in my initial sample (38.8%).

Ajayi’s involvement in the passing game was heavily skewed towards the inside and outside area of the field close to his offensive line, making up 36.4% and 45.5% of his total targets, respectively. It may come as a surprise to some, but Ajayi is actually very good in the receiving game. He makes adjustments over his shoulder and shows great concentration, though he had some lapses as well. His opportunities were limited, however; he drew just 11 targets in the passing game all season.

While offensive lines show a direct correlation to running back success, a running back's skill still plays a part. Let's look and see how Ajayi actually performed in comparison to what was expected of him behind the putrid Miami offensive line. 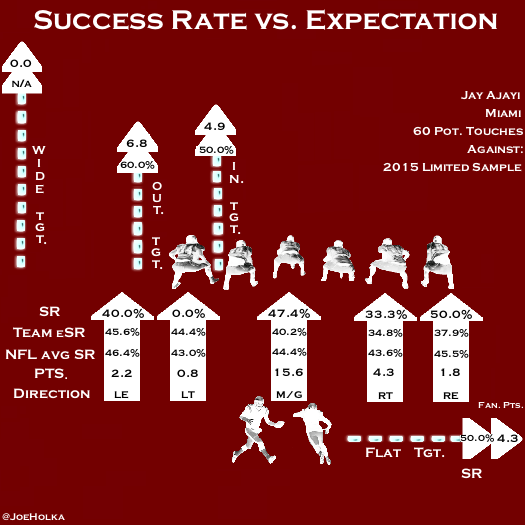 The overall eSR for Ajayi and the Dolphins was 39.5% per rushing attempt -- 28th in the NFL and well below the NFL average of 44.3%. The Dolphins weren’t any better in pass protection at 40.7% expectation; the league average is 43.9%.

Through the middle, Ajayi was successful 47.4% of the time. His success rate was actually 4.8% better than his counterpart, Lamar Miller, last year, and 7.2% above team expectation.

As far as the perimeter, Ajayi and Miller both absolutely tore teams up on outside runs, especially to the right where Ajayi in particular was 12.1% above expectation. The right end was the only rushing lane Ajayi really blew the doors off from a success rate perspective.

Ajayi has above average athletic ability and good agility behind the line of scrimmage when his offensive line doesn’t create large holes. He shortens his steps when he sees trouble and is patient enough to wait for creases.

Ajayi was efficient on the few targets he got last year, finishing well above expectation in every area of the field but out wide, where he saw no targets. (Once again, we must respect the fact that the results come from a very small sample.)

Though we proved the insane efficiency narrative with Miller may be slightly overblown earlier in the offseason, he was indeed more efficient than Ajayi. Let’s take a peek at Ajayi’s overall results now to be sure. 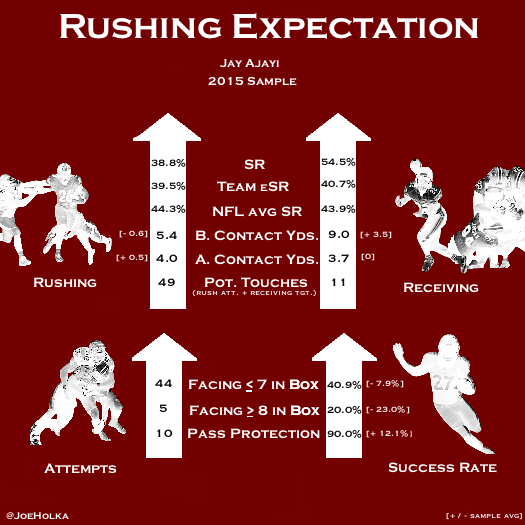 These numbers put Ajayi below average from a success rate perspective in regards to what he was expected to do -- nearly in the bottom quarter of my initial 20-player sample, just behind fellow rookie Melvin Gordon, who many believe had a disastrous 2015 season in regards to efficiency.

Ajayi finished in the middle percentile in regards to yards before contact. I weight this stat extremely high in my overall analysis, as I have found elusiveness behind the line of scrimmage to be much more predictive in elite production than yards after contact.

Before Contact Yards are something I discuss at length in my introduction. Elusiveness behind the line of scrimmage is an extremely underrated but prevalent ability among the league's best feature backs. Ajayi’s before contact yards (rushing) of 5.4 per carry were below average in my overall results.

Ajayi finished a full 0.5 yards after contact more per carry than the average in my sample, which was in the top-25 percentile. He is an rare finisher and shows balance through contact, which can mostly be attributed to his violent running style, and power which greatly exceeds his size. Ajayi is the kind of player that is looking to send a message on every play, running over anyone in his path and absorbing contact from various angles. He also has a fantastic stiff-arm. Ajayi changes direction quickly and relies on jump cuts, spin moves, and dips to make it through first contact.

The biggest problem I see on film with Ajayi is his average mental processing skills. His football IQ is underwhelming and he needs to refine his judgment and decision making. Ajayi is an intriguing talent, but he takes a lot of chances and tries to make unnecessary cutbacks on plays, which oftentimes is counterproductive.

Ajayi faced eight or more in the box on the lowest percentage of total runs of my 20-player sample (tied with Dion Lewis 10.2%). What might be somewhat concerning is there was a huge drop-off (-20.9%) from when Ajayi faced seven or less to when he faced eight or more in the box. The sample size was small, but his average vision behind the line of scrimmage is still somewhat of a red flag. Facing seven or less in the box, Ajayi was 7.9% below sample average.

Ajayi was also rarely asked to pass protect (something Foster is very good at, by the way). Ajayi was below average in the small sample I saw, but showed enough basic technique to make me believe he could improve.

Ajayi was a running back I really liked coming into the league last year, even with the concerns surrounding the health of his knee. Since he was taken in the fifth round a year ago, the head coach (Joe Philbin) and general manager (Dennis Hickey) that selected him have been shown the door. The new regime has not shown immense confidence in Ajayi by their actions in the draft or in free agency.

The Dolphins drafted Kenyan Drake as the third running back in the 2015 draft, at 73rd overall. Drake played behind T.J. Yeldon at Alabama, but has a ton of Charles Sims-like versatility in the passing game. The good news for Ajayi is Drake can’t pass protect, which will severely impact his ability to get on the field in year one.

Foster will always be an injury risk. He has played a full season just twice in his seven year career. But if Foster is healthy, he could be a central figure in the Dolphins offense. An obvious concern is Gase’s low usage of running backs in the passing game. Ajayi could still carve out a substantial role between the tackles on a team that projects to run the ball a ton in Gase’s system. The main worry, however, is that Ajayi’s flaws and lack of versatility will be a factor that holds him back from getting on the field if Foster is healthy.