A constant drumbeat surrounding a situation or player is something that is largely underrated in analysis this time of year. As a community, one play or strong preseason game can vault a player up our boards perhaps quicker than they should. A stream of narratives and reports in the offseason, positive or negative, is often times a better indicator of a situation than preseason usage.

That said, sometimes the preseason only strengthens those narratives and further solidifies how we should approach a situation that is more clear than most. So far, Jacksonville Jaguars have let T.J. Yeldon and Chris Ivory share first-team duties in the preseason, with Yeldon tallying 11 carries to Ivory's 16 through three preseason games.

Before we get into what to expect from the Jaguars' backfield in 2016, let's step back a bit first. After a solid “real” football season as a rookie where Yeldon led all running backs in snaps in the twelve games he was active, he will now transition from a rookie bell cow into a complementary player in this offense. Last season, Yeldon finished 27th in the league in carries from inside the 20 and 38th from inside the 10, yet had less carries from inside than five than both Toby Gerhart and Denard Robinson on his own team. The Jaguars never envisioned Yeldon as a player to showcase in the red-zone, which was even more apparent when they went out and signed Ivory to a five-year, $32 million contract this offseason.

Yeldon’s situation differs from a player like Ameer Abdullah in my opinion. Draft capital aside (Yeldon was a 2nd-round pick in 2015), his path to an increase in red zone touches is much tougher than Abdullah's. The Jaguars didn’t just bring in “any” free agent, they showed a huge lack of confidence in Yeldon in the red zone by bringing in a free agent that finished seventh in red zone carries in 2015, and first from inside the five. Even with the likely regression to the mean of Jaguars running backs scoring only three of the offense’s 40 touchdowns in 2015, the goal line carries are almost surely going to go to Ivory, not Yeldon. Jacksonville running backs also handled just 39% of team touches inside the opponent’s 5-yard line last season.

It doesn’t get much better in the passing game from in close, either. In an offense that lead the league in red zone pass attempts, eight players had more targets inside the twenty than Yeldon. Denard Robinson nearly doubled him with seven targets in the red-zone in 2015.

Did Yeldon show last season that he has the talent to battle through the presence of Ivory? Let’s take a look at Yeldon’s 2015 Rushing Expectation sample, starting with Attempts and Targets: 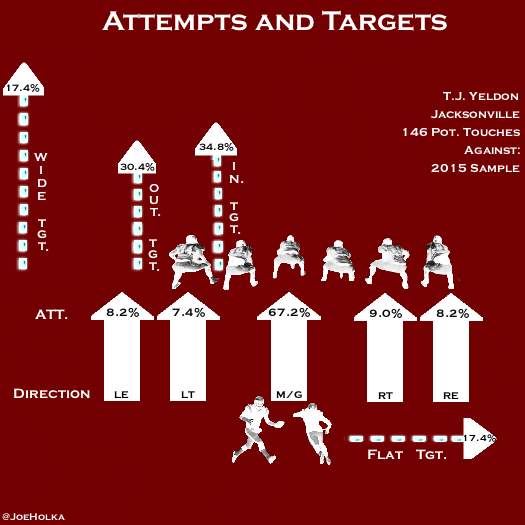 Yeldon is not necessarily a big-play threat, but there is a quiet confidence to his game. He runs with control, patience, and short-stride savvy that many players in the league could learn from. He has very good football IQ and rare mental processing. He doesn’t possess great breakaway speed, but has very good burst between the tackles, where he shows better timing than almost every back I have studied so far in this methodology.

An overwhelming percentage of Yeldon’s total rush attempts (67.2%) went through the middle. These are attempts that come behind the center, left, or right guard.

Yeldon’s targets in the passing game represented just 16.4% of his total potential touches (rush attempts plus targets). This is below my sample average, but Yeldon shows versatility in the fact that his targets were evenly distributed throughout different areas of the field. Yeldon is an above average receiver and shows good ability to catch the ball with his hands at difficult catch points.

Yeldon has good athletic ability, but lacks some quickness. However, his change of direction is above average. He sets up defenders well and uses various types of jukes and cuts to avoid contact and keep players off-balance.

Contrary his overall situation in Jacksonville, I do like a lot of what I see with Yeldon from a talent and film evaluation perspective. Unfortunately for Yeldon, situation does play a large part in fantasy success at the running back position. But for now, let's examine whether Yeldon exceeded or fell below expectations in 2015 from an efficiency or metrics point of view. 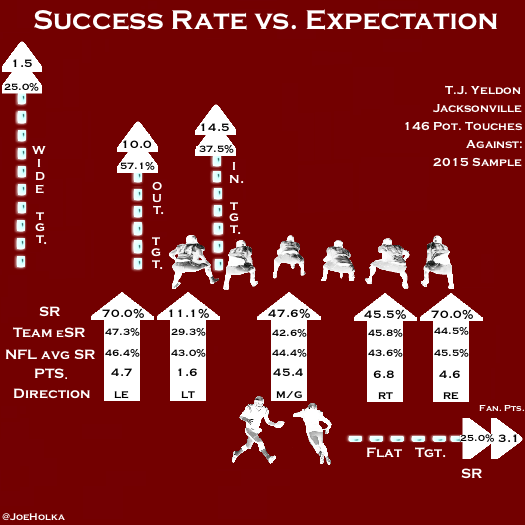 The overall eSR for Yeldon and the Jaguars was 42.7% per rushing attempt, 16th in the league and hovering right around the NFL average of 44.3%.

Jacksonville was average in pass protection as well, boasting a 43.6% eSR per target, just 0.3% below the NFL average.

Per attempt, Yeldon was most successful to the either end (70% SR), but these runs represented just 16.4% of his total attempts. That said, Yeldon had the highest SR of any player to the right end, with the next closest back being Ameer Abdullah (69.2%). Through the middle (Yeldon's largest sample size), he finished above team expectation by 5.0%, which was very close to my sample average of 48.3%.

Let's jump into Yeldon’s overall Rushing Expectation results to see if they support my grades and film evaluation. 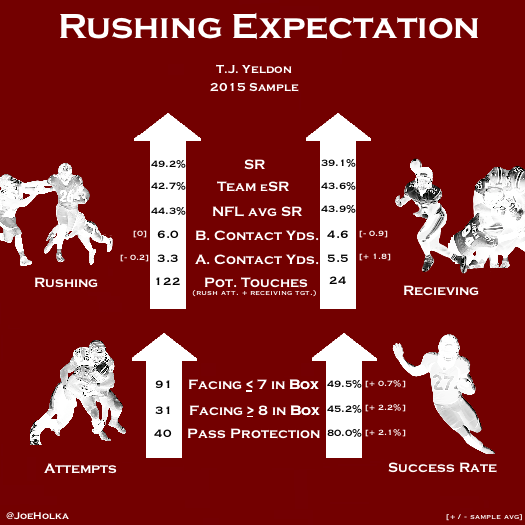 Although Yeldon ran behind what was statistically a middle-of-the-pack offensive line in 2015, he performed above expectation by 6.5% in the run game. He finished 4.5% below expectation in the passing game, however.

Yeldon’s efficiency put him eighth overall in my entire 20-player sample in regards to percent above or below expectation. He finished 12th of twenty players in regards to overall performance above expectation, which combines his per-attempt and per-target data.

I weigh Before Contact Yards heavily when analyzing Rushing Expectation results. Elusiveness behind the line of scrimmage is an extremely underrated (but prevalent) ability among the league's best feature backs. Yeldon’s before contact yards (rushing) of 6.0 yards per carry was right at my sample average.

After first contact, Yeldon posted a slightly below average 3.3 yards per attempt. On film, he shows very good finish and above average power. He is good in one-on-one situations at the point of attack and has a very strong base, although his pad level could definitely be better.

Yeldon has above average vision and is creative in how he varies the intensity of his cuts behind the line of scrimmage. He is good at finding lanes behind both standard defense sets or a loaded box. Yeldon only saw a 4.3% drop off in his attempts facing seven or less in the box versus eight or more, slightly above average for my initial 20-player sample.

Yeldon is was an above average asset in pass protection on 80.0% of his opportunities in this sample. He is an aggressive player that has the size and strength to stop a blitzing defender in his tracks. Ivory is also strong in this category, which is good news for Blake Bortles and Jaguars fans alike.

I don’t buy into the narratives that Yeldon is overrated as a talent after just one season. With that said, his situation, not unlike a lot of talented backs from the 2015 class, leaves a lot to be desired.

Yeldon is a capable runner and is proficient in the passing game, but Ivory has been a useful fantasy asset when healthy in the past. Yeldon may have PPR upside through volume alone, but his touchdown floor is extremely low. Ivory has a ton of touchdown upside, but will lose snaps to Yeldon on third downs and passing situations.

Both players have their share of concerns. Yeldon, in theory, has the upper hand in snaps per game because of his versatility. Teams will know what to expect when Ivory is in the game and coaches generally try and avoid those situations. At the same time we must also take into consideration Yeldon’s ball security issues could create a lack of trust with his coaching staff pretty quickly (as recently as the Jaguars third preseason game Yeldon lost a fumble that was held much too low and loose). It may just be an injury that pushes Yeldon or Ivory to fantasy relevance, but for now I am fading both, even at their reasonable ADP. Could the Jaguars backfield be a less expensive version of Giovanni Bernard and Jeremy Hill in Cincinnati? Sure, but I am not overly confident in that comparison. mostly because of the embarrassment of talent that the Jaguars have in the passing game.

Both Yeldon and Ivory have had their share of injury troubles, so I can certainly see the default appeal in a Zero RB draft strategy, but for any sort of upside, you are relying on an injury which is not something I typically want to overdo, either. I look for more standalone value in committee situations that I can rely on from week to week.

This is one of the more clear backfields I have seen to date. Both Yeldon and Ivory complement each other extremely well for real football purposes, but they will undoubtedly cannibalize each other’s fantasy production. It may be a situation where the Jaguars ride the hot hand, which is honestly even worse. This is shaping up to be a very frustrating situation for fantasy owners in 2016, and I would proceed at your own risk.