Rushing Expectation: Giovani Bernard - Tip of the Iceberg, or Floating Piece of Ice?

In today’s NFL there are plenty of instances where we will never get to see more than the tip of the iceberg in regards to a players’ talent.

Committee situations will always cannibalize each players upside in fantasy, but in real football, employing a committee with defined roles is often times the optimal strategy at a position that is so fragile.

It doesn’t take long watching Giovani Bernard to realize that his athletic ability is nearly elite and his balance making cuts and making defenders miss in the open field is inexplicably rare. What’s frustrating is how often Bernard is stringing plays together to work the offense downfield, only to defer to a far less talented Jeremy Hill in scoring position.

Per John Paulsen, “Jeremy Hill out-touched Giovani Bernard, 26% to 22%, in situations where Cincinnati wasn’t trailing by three or more. In all other situations, touches were split evenly (14%).” The problem with this relatively even split is the Bengals shotgun-based spread offense is far better suited towards Bernard’s strengths than Hill’s.

It is hard to see the departure of offensive coordinator Hue Jackson helping Bernard, but a faster-paced offense that skews more towards the pass under Ken Zampese in theory could negatively affect Hill more.

Naturally, due to increased attempts but not targets, Hill has produced much better in games without Bernard. We have yet to see what would happen if the situation reversed itself. Bernard has not played a game in his young NFL career without either Hill or BenJarvus Green-Ellis taking early down work and red zone touches. Of players with ten or more games played, Bernard has finished as the RB23, RB13, and RB15 in regards to PPR points per game over the last three years -- despite never leading his team in rushing attempts.

In theory, if Hill missed time, Bernard could be the player that Hill proved he is incapable of being: a three-down back that is active in the passing game. Bernard would have access to extra attempts as well as goal line touches.

Speaking of the goal line, Bernard scored fifteen touchdowns in his first two seasons, but scored just twice in 2015. The Bengals finished in the top-12 in red zone touches last season. The volume has been there; efficiency, not so much. In the last two seasons, Bernard has finished in the top-18 in rush attempts both inside the 20-yard line and inside the 10-yard line.

Bernard just doesn’t score touchdowns, and despite the positive regression likely to come his way in 2016, this matters in fantasy football.

Did Bernard show last season that he has the talent to earn a bigger share of the volume in the Cincinnati backfield? Let’s take a look at his 2015 Rushing Expectation sample, starting with Attempts and Targets: 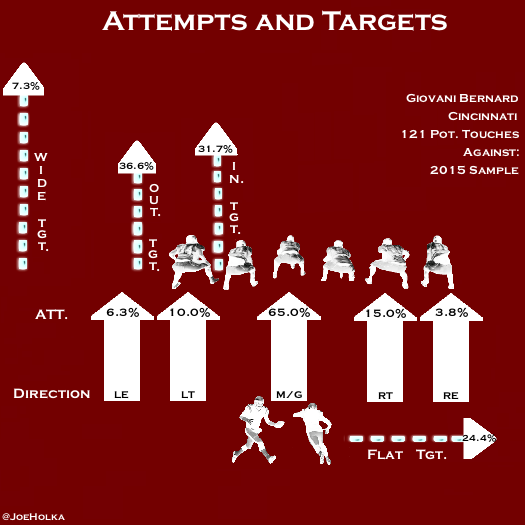 From a talent perspective, there is a lot to like with Bernard. His agility is rare and is very good changing direction in the open field and reducing good angles.

Bernard’s run distribution is pretty standard, with the majority of his runs coming through the middle at 65.0%. Similar to the last profile (Thomas Rawls), Bernard brings more attempts through the left and right tackle lanes than to either end.

In the receiving game, Bernard can do it all. For a running back, he displays rare skill in running routes and is violent in his cuts. He is a constant threat in the flat and also through the outside or inside receiving areas when the opponents aren’t considering him a primary option. He can also line up as a wide receiver and do damage in the short-to-intermediate passing game.

It should be clear already that I am a fan of Bernard’s real football talent from a film evaluation perspective. The question is, did Bernard exceed or fall below expectation in 2015 from an efficiency or metrics point of view? 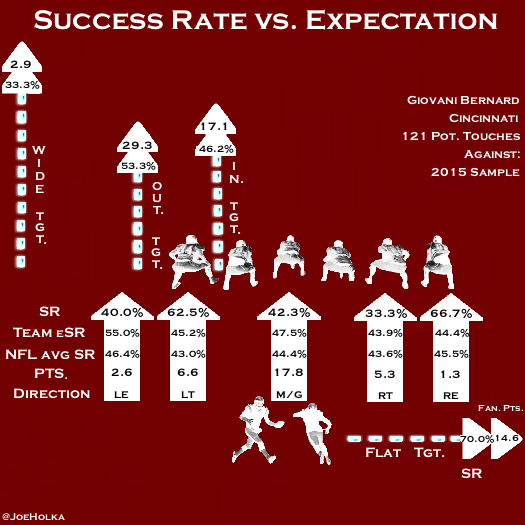 The overall eSR for Bernard and the Bengals was 47.1% per rushing attempt, best in the league according to Adjusted Line Yards and well above the NFL average of 44.3%. Cincinnati was equally impressive in pass protection, boasting the best overall expectation of any team at 46.5% eSR per target.

Per attempt, Bernard was most successful to right end, with a SR of 66.7%, and left tackle, with a SR of 62.5%, though these two combined only represented 13.8% of his total rushing sample size. Bernard finished below his team expectation through his largest sample size, the middle lane, by - 5.2%. This was an entire 6.0% below the average of my initial 20-player sample for runs through the middle, and Bernard ran behind arguably the best run blocking offensive line in the league.

Per target, Bernard found the most success with targets through the flat lane, at a 70.0% SR, but finished above team expectation in all areas but out wide, where he still finished 7.6% above the sample average.

So far, Bernard does not look nearly as efficient on a per-rushing-attempt basis as on a per-target basis. Let's jump into Bernard’s overall Rushing Expectation results to see if they support my grades and film evaluation. 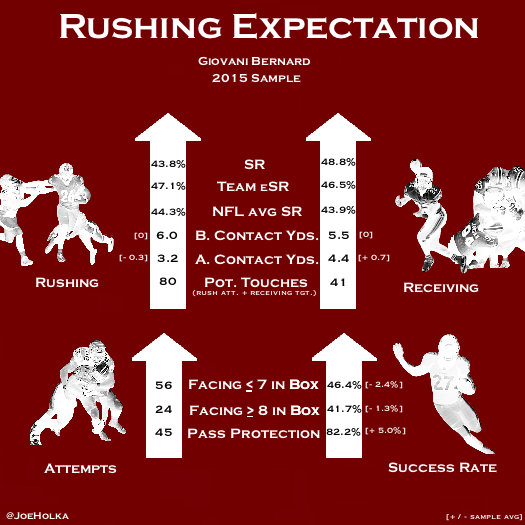 Behind statistically one of the best-run blocking offensive lines in the league, Bernard performed below expectation in his 2015 sample by an overall -3.3% mark in the run game. He did finish 2.3% above his eSR in the passing game, however.

These numbers put Bernard fifth-worst in my initial 20-player sample in regards to his rushing expectation. His efficiency in the passing game was adequate, as he was still in the green, but his 2.3% above-expectation figure still put him in the bottom half of this group among players with at least 15 targets.

This is surprising to me, as I found Bernard to have very good elusiveness behind the line of scrimmage. I found his vision to be very good, and he is consistently exploiting small creases and knows when to bounce a play way from the intended hole. As an undersized interior runner, Bernard has very good mental processing as far as judging angles. This is very important.

Bernard has rare burst and can accelerate quickly enough to get to the corner while using his hands very well to work through contact using stiff arms. He averaged 3.2 yards after contact (rushing) in his 2015 sample, which tied him for fifth-worst of my initial 20-player sample with Latavius Murray. Bernard’s strength is solid, but he has to pick his spots better when he attacks defenders as a smaller back.

I also found this as a bit of surprise from a back that I saw to have very good overall balance. If Bernard gets loose, he is a unique threat in the open field, but in 2015 he went down far to easily on first contact.

Bernard posted a below average SR against both seven or less and eight or more in the box. His drop-off of -4.7% was just above my sample average of -5.73%.

In pass protection, Bernard is above average and performed very well. He finished the sixth-best back in my sample, just behind C.J. Anderson (including only players with at least 10 opportunities). Bernard is good at diagnosing his assignments and uses angles to his advantage as opposed to standing up bigger defenders.

This is my biggest clash to date regarding film and metrics. Bernard’s ability and talent level jumps off the screen, but his efficiency and overall numbers underwhelm.

The issue for Bernard is that Hill has both the experience and draft pedigree to remain a significant part of the Bengals' plan on offense. Hill was the second running back taken in the 2014 draft and they took him No. 55 overall. No organization wants to admit they were wrong, and few backs will have as many opportunities to produce -- especially in the red zone -- as Hill will in 2016.

Bernard's competition outside of Hill is largely unimpressive, as Rex Burkhead and Cedric Peerman have just 77 carries combined in their careers. The idea of Bernard taking over a massive workload if Hill went down is enticing, although it is not a given considering Bernard's lack of experience as a feature back.

Despite reports that Bernard’s role won’t “change much” from last season, it’s easy to say in August that Brandon LaFell and Tyler Boyd will gain big portion of targets that would have gone to Eifert -- but will that actually be the case when the season gets underway?

The reality is that outside of A.J. Green, Bernard is Andy Dalton’s most familiar receiver. There is also the chance the that Bengals will have to throw more if they cant maintain the efficiency of last season. The Bengals trailed for just 25% of their offensive plays in 2015, fourth-fewest in the NFL.

Bernard has an attractive receiving floor but if Hill stays healthy, Bernard just doesn’t have the same upside, ceiling, or opportunity that his 5th-round ADP should merit. I would much rather own a player like Dion Lewis or Danny Woodhead if drafting a running back in this range.

It is always hard to invest in a player that slowed down as the season came to a close as well. However, this is more about the fact that Bernard is just a much better football player than fantasy asset at his current price.