It is a bit naive to believe that Melvin Gordon’s 44-yard receiving touchdown in the preseason means anything. It didn't happen in the regular season, so it does not end his 590-day touchdown drought as far as I'm concerned. Blown coverage or not, recency bias is something we must sift through in the offseason, preseason, and regular season.

Don’t get me wrong, Gordon showing some explosiveness coming off microfracture surgery is very encouraging, but let’s not pretend like a preseason touchdown is more important than it really is.

Will Gordon's Role Increase After a Miserable 2015 Season?

The overall perception of Gordon’s rookie season is that it was a complete disaster. He was inefficient on per-touch basis and had zero touchdowns.

While we're on the subject of touchdowns, just thirteen of Gordon’s 217 touches came from inside the 20, and he accumulated just 28.9% of the Chargers’ total red zone rushing attempts in 2015.

You can argue positive touchdown regression all you want, but if Gordon doesn’t see an increase in volume in the red zone in 2016, Woodhead will continue to have a stranglehold on Gordon's fantasy ceiling.

Gordon’s fumbling issue as a rookie does not help his cause. He put six balls on the ground in 2015, losing four. For what it’s worth, Gordon was reportedly working with Adrian Peterson in the offseason to help improve in this area.

Before we trudge through some data, the main reason for optimism regarding Gordon is the return of Ken Whisenhunt to the Chargers. In Whisenhunt's previous stint with the team in 2013, he showed that he could get another running back significant volume in addition to Woodhead. This led to fantasy relevance for both Woodhead and Ryan Mathews.

In 2013, Whisenhunt's running backs accumulated 559 touches, a number that would have led the NFL in 2015. The San Diego running backs also represented nearly 65% of the team’s total touches that year, a figure that also would have been tops in the NFL last year.

It should be noted that Whisenhunt’s use of a committee versus a primary workhorse has fluctuated throughout his coaching career. However, I believe Whisenhunt's recent history with Woodhead, a very unique talent, is the most relevant. Whisenhunt's “starter” in 2013 was Mathews, a player that comps very similarly to Gordon. Mathews is also much more comfortable behind two-back sets than running out of the shotgun, something Gordon will get to do much more in 2016.

Before we go any further on Woodhead's potential impact on Gordon, let's use Gordon’s 2015 Rushing Expectation sample to dig deeper into his rookie season stinkbomb. How possible is it that Gordon will be yet another example of a running back that breaks out in year two? 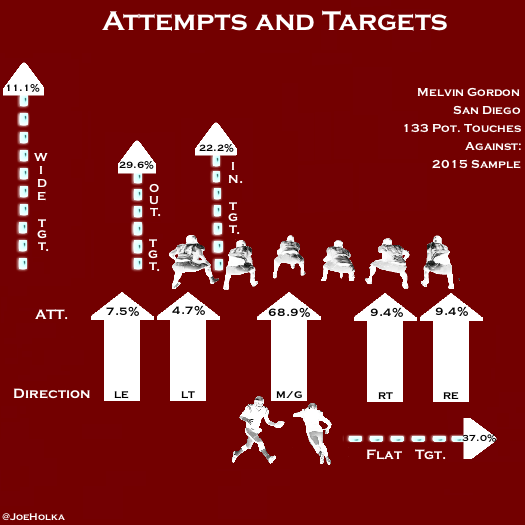 The first things I noticed watching Gordon on tape were his rare agility and explosiveness, which he pairs with very good burst and near-elite acceleration. Gordon’s long speed most closely resembles Tevin Coleman's in my initial 20-player sample, although Gordon's speed is still a clear notch below Coleman's in my opinion. Gordon's hip flexibility and pad level are very good, and pairing those skills with rare burst makes Gordon a viable breakaway threat in the NFL.

An overwhelming percentage of Gordon's total rush attempts (68.9%) went through the middle. These are attempts that come behind the center, left, or right guard.

Gordon's targets in the passing game represented just 20.3% of his total potential touches (rush attempts plus targets). This was right in line with my sample's average. Of running backs in the sample with fifteen or more targets, Gordon tied with Lamar Miller for the second largest distribution of total targets to the flat (37.0%). The only player with more in my sample was Mathews at 37.5%.

Strong agility scores (the sum of a player's 20-yard short shuttle time and three-cone time) have always had a strong correlation to receptions, and Gordon had a 75th-percentile agility score coming into the league. As Gordon is a relatively big back, his agility score should give us even more of a inclination as to his pass catching ability -- even though he caught just 30 passes to Woodhead's 80 in 2015. Gordon consistently showed the ability to catch passes with his hands, and at times even with his back to Philip Rivers, who is very good at getting the ball to his running backs in the intermediate passing game. This is part of the reason Rivers has been so efficient over the years, especially under Whisenhunt.

While offensive lines show a direct correlation to running back success, a running back's skill still plays a part. Let's look and see how Gordon actually performed in comparison to what was expected of him behind the putrid Chargers offensive line. 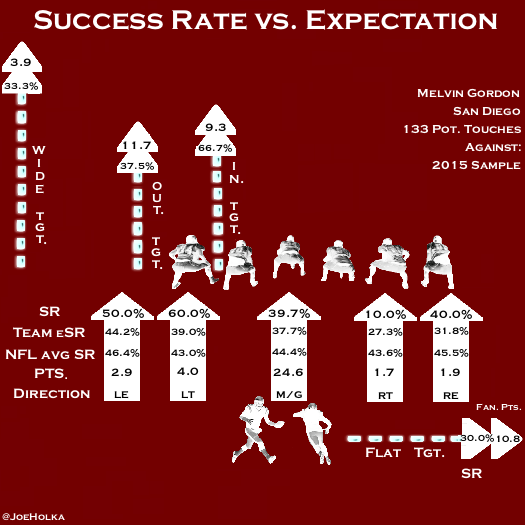 The overall eSR for the Chargers was 36.9% per rushing attempt, the second-lowest in the league, just slightly better than San Francisco (36.6%) and well below the NFL average of 44.3%. San Diego was equally unimpressive in pass protection, boasting the second-worst overall expectation of any team (40.3%).

There are reasons for optimism that this line could be better in 2016. Firstly, the line was absolutely decimated by injuries in 2015. Secondly, San Diego has added the dependable Matt Slauson and Day-2 pick Max Tuerk to bolster the line.

Another major factor working in Gordon's favor is he will get to run in two-back sets more often next year behind a fullback -- the team went as far as drafting Gordon’s lead blocker in college, Derek Watt. San Diego used a fullback in Whisenhunt’s last stint with the Chargers as well. It should be noted, however, that Gordon actually averaged less yards per carry on plays with the quarterback under center (2.7) than out of plays in the shotgun (3.8).

Per attempt, Gordon was most successful behind the left tackle (60.0% SR) and left end (50.0% SR), though these two combined only represented 12.2% of Gordon's total rushing sample size.

That said, Gordon was still an 8.6% below the average of my initial sample on runs through the middle. At least some of his inefficiency can be attributed to running behind an offensive line held together with duct tape.

Per target, Gordon found by far the most success with targets to the inside (66.7% SR), but finished below team expectation in all other target areas. Inside targets represented 22.2% of Gordon's total.

I won’t try and tell you that Gordon blew the doors off the league in his rookie season from an efficiency standpoint. Clearly, that is not the case. All things considered, however, the hate for the highly touted prospect may have gone way too far. Let's jump into Gordon’s overall Rushing Expectation results to see if they support my grades and film evaluation. 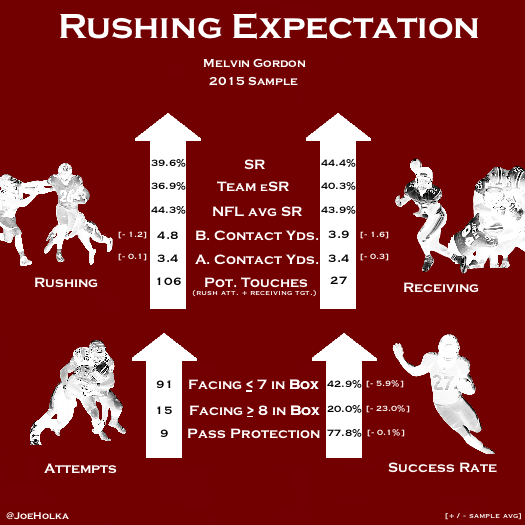 Behind what was statistically the NFL's second-worst run blocking offensive line according to Adjusted Line Yards, Gordon performed above expectation in his 2015 sample by 2.7% per attempt, and 4.1% above his eSR per target.

These aren’t immaculate numbers by any means, but to lump Gordon’s rookie season in with the inefficient backs like Jeremy Langford and Latavius Murray -- who were in far better situations -- seems completely asinine.

Before contact yards are a big part of my philosophy on what constitutes a great feature back. Some players make their offensive line look better through vision and agility, not the other way around. Gordon finished dead last in my initial 20-player sample in yards before contact at 4.8 yards per attempt. The next closest player was Langford who was a full 0.4 yards better per attempt. The average of my sample was 1.2 yards per attempt better.

This is by far the biggest red flag the data has shown me on Gordon so far and cannot be ignored.

Admittedly, Gordon's before contact numbers were a bit puzzling given his agility grade and hip flexibility. The pathetic yards before contact score is most likely due to Gordon's below average mental processing and football IQ. He needs to show vast improvement in making the right reads and showing decisiveness out of cuts.

After first contact, Gordon averaged 3.4 yards per attempt, slightly below average in my initial sample. While he shows solid balance through contact, he is much better at finishing with a head of steam, something that his makeshift offensive line didn’t allow him to do often in 2015. Although not a power back by any means, Gordon does display good physicality and aggression at the point of attack.

Gordon had the worst efficiency drop-off of any player in my sample when going from seven or less in the box to eight or more (-22.9%). Gordon was a full 6.0% above overall expectation against base defensive sets, but was 16.9% below overall expectation against eight or more in the box. I found Gordon's vision to be average at best, and he was also merely average at using his improvisational skills behind the line of scrimmage to avoid contact. Thankfully, Gordon faced a loaded box just 14.2% of the time in 2015, well below my sample's average.

Much like how Gordon was not trusted often in scoring position, he was also rarely asked to pass protect. When he did, he was below average in the small sample I saw, often getting into trouble using poor angles to deter defenders from hitting the quarterback.

Gordon is coming off of microfracture surgery -- an injury many players have failed to regain explosiveness from -- but there has been continued optimism based on the details surrounding his injury in particular all offseason.

It is not abnormal for a team to say they want to run the ball more. In fact, it is absolutely said more than the alternative. Somehow, the Chargers were in a lot of close games last year, losing most of them. This caused them to remain in throwing mode longer, rather than relying on their subpar running game and completely decimated offensive line.

The offensive line play affected Gordon much more than Woodhead and Rivers, who saw the majority of their production in the short-to-intermediate passing game. Gordon could find himself in a positive game flow situation more often in 2016, as Vegas has San Diego favored to win three more games than last year.

Regardless of game script, Woodhead has a trust factor with Rivers in the passing game, a fact which should not be understated. However, if Gordon can eat just a tiny bit into Woodhead’s targets without ceding any more rush attempts, he is in a great spot to outperform his ADP on volume alone.

The Chargers continued to feed Gordon carries last season even with the ineffectiveness of the entire running game, and they also have a ton of draft capital invested in him. I’ve said it before, but being a first-round pick matters, no team wants to admit they made the wrong decision regarding a player drafted that high. Even if Woodhead resumes most of the third-down and goal line work, Gordon has a higher floor of volume than most other running backs at his ADP.

If San Diego's offensive line improves even slightly from last season, both Gordon and Woodhead could emerge as great values in 2015. History has shown there is room for both to excel in a Whisenhunt offense.