Breakaway speed is something that is vastly overrated at the running back position. Sure, if a back gets to the second level where he can open up his stride, speed can be a thing of beauty to the casual football fan. However, it is not every play that a running back will get a 7-10 yard head start to get downhill, which is why I weigh agility and hip flexibility so heavily. You want players on your fantasy team who can get low enough to translate raw strength into power.

Tevin Coleman looks like he was shot out of a cannon when he touches the football (4.39 40-yard dash at the NFL Combine), but as soon as he tries to make a move laterally you can easily see the difference between him and a superstar player with comparable long speed, such as Todd Gurley.

Before Devonta Freeman was the overall RB1 in fantasy, it was Coleman who opened the 2015 season as the starting running back in Atlanta. After accumulating 20 carries in Week 1, the third-round pick suffered a significant rib injury in Week 2. The injury completely opened the door for an underappreciated Freeman to show the Falcons his versatility and three-down viability. To his credit, Freeman took full advantage of his opportunity and became a focal point in the Atlanta offense alongside Julio Jones.

It wasn’t all bad for Coleman in 2015. With Freeman out with a concussion in Week 12, Coleman posted a 18-110 stat line. Unfortunately, what people remember is his lack of proficiency in the passing game and three lost fumbles on the season. Coleman was never a great fit for Atlanta's zone blocking scheme, as quick cuts between tackles and vision are not strong points of his game.

The idea, in theory, from offensive coordinator Kyle Shanahan drafting a player like Coleman was to help offset poor offensive line play by drafting a runner that could make one cut up field and break some long plays through elite speed and burst alone. A change in blocking scheme was clearly a huge adjustment for Coleman in his rookie year. Coleman is much more suited for a gap scheme where he can make one decision and burst through a hole.

Per Chris Raybon, “We knew Shanahan loved Devonta Freeman before the [2015] season, and Atlanta went on to have a 20-touch back 12 times (11 of which were Freeman).” That said, Atlanta has made it very clear that they want Coleman to have a bigger role in 2016, if for nothing else than to keep Freeman fresh for 16 games.

Did Coleman show last season that he has the talent to cut deeper into Freeman’s touches? Let’s take a look at Coleman’s 2015 Rushing Expectation sample, starting with Attempts and Targets: 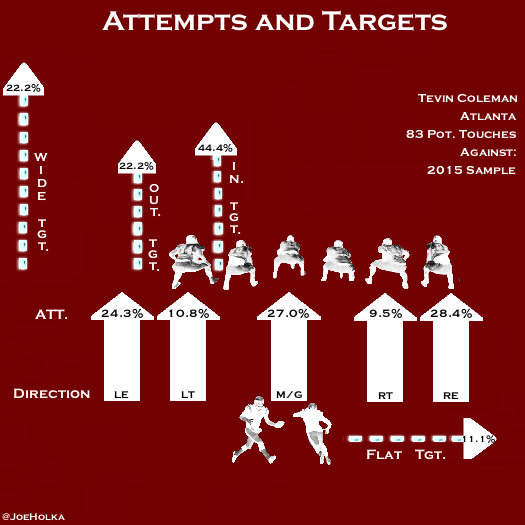 Coleman is a legitimate threat to take it the distance on any given play and has elite level NFL speed. He is truly unique in regards to his separation in the open field. Most backs have a huge percentage of their runs coming through the middle, but Coleman is content to use his speed to either end more than any other player in my initial sample (52.7%). There are times he shows a lack of discipline from designed middle plays, but his burst is good enough to beat the first level of tacklers consistently. He carried the ball through the middle less often than any player in my sample outside of Ameer Abdullah (25.9%).

Coleman is a physical player, but don’t mistake his physicality for power. Coleman has good play strength, but struggles to generate push at the line of scrimmage for extra yards. These struggles are mostly due to his upright running style and stiff hips that limit his ability to generate elite power.

Coleman’s sample size of just nine targets shows that he was used sparingly last season in the passing game, but when he was targeted, it was most often running through the offensive line to the inside area of the field. Coleman has flashed solid ball skills and average hands when called upon at the collegiate level, so it stands to reason that in spite of a few bad drops in 2015, he could show improvement in the passing game.

A running back's skill still plays a part in running back success. Let’s look and see how Coleman performed in comparison to what was expected behind the Atlanta offensive line. 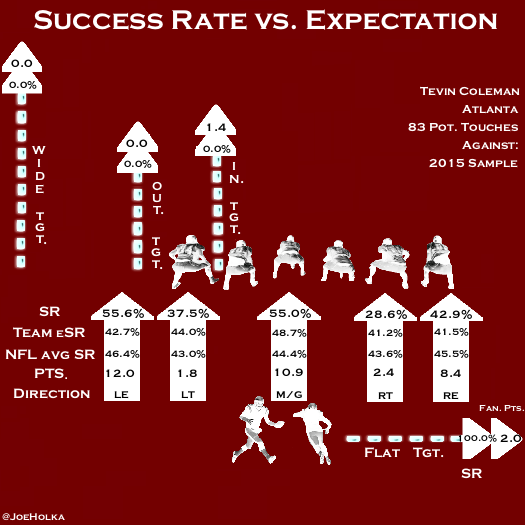 The overall eSR for Coleman and the Falcons was 43.2% per rushing attempt, while the NFL average is 44.3%. Atlanta was right at the NFL average in pass protection as well, with an expectation of 43.9%.

Per attempt, Coleman was most successful to the left end with a SR of 55.6%, which represented 24.3% of his total rushing sample size. Coleman was just 1.4% above his team eSR through his largest sample size, left end. He did have the fourth-best SR through the middle in my sample, but that could be partially due to the fact that he also had the second-lowest percentage of his attempts come through that rushing lane.

Per target, Coleman posted a 0.0% SR in every area of the field aside from in the flat, where he caught his only target for a measly 2 PPR fantasy points. Coleman had three drops in just nine targets in his 2015 sample.

Let's jump into the overall Rushing Expectation results from Coleman and dig a bit deeper into some film evaluation. 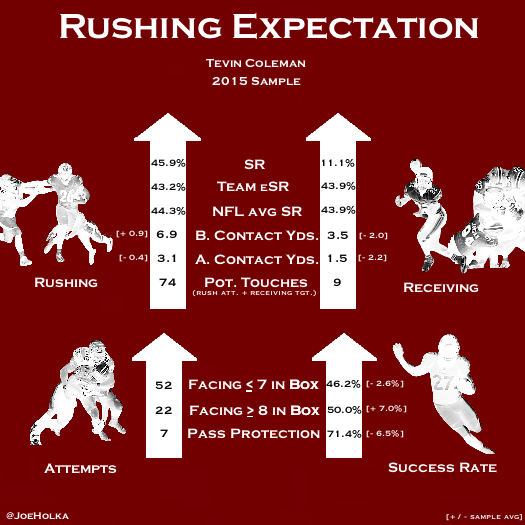 Coleman ran behind what was statistically a middle-of-the-pack offensive line in 2015 and performed slightly above expectation (2.7%) in the run game, but was terribly inefficient on very limited targets in the passing game (-32.8%).

These numbers put Coleman into the below average category from a success rate perspective in regards to what he was expected to do. He was securely in the bottom half of my initial 20-player sample, behind guys with similar run distributions heavily skewed to the outside like Ryan Mathews, the aforementioned Abdullah, and Matt Jones.

As a community, we fantasy analysts vastly understate the importance of yards before contact at the running back position. Elusiveness behind the line of scrimmage and the ability to find small creases is much more important than long speed.

Coleman performed very well in relation to the rest of the pack in the yards before contact category. Only Abdullah (7.7 yards) finished with more yards per attempt before contact than Coleman (6.9 yards). Thomas Rawls was also closely behind at 6.8 yards per attempt. Coleman’s elite short-area burst and rare explosiveness allows him to get to the outside seemingly at will which in theory skews things a bit in Coleman’s favor. Statistically, players who see the majority of their runs come through the middle saw lower before contact yard scores.

Coleman has solid mental processing skills. If he can somehow get to the open field, defenders are forced to take conservative angles and respect his speed. These angles help him consistently gain extra yards. That said, Coleman shows average creativity once he gets to the second level, which limits his ability to maximize his great physical tools.

After first contact, Coleman averaged just 3.1 yards per attempt. While he shows good balance through contact, his pad level is one of the worst I’ve seen. Defenders are often lower than him at the point of contact and he rarely wins in one-on-one confrontations.

Another concern was Coleman’s lack of involvement -- and success -- in pass protection. He had just seven pass protection attempts in the seven games I sampled. Coleman is willing to stand up blitz attempts, but as soon as a player makes him turn his hips, he’s already beat. Coleman needs to show at least adequate ability in pass protection to be trusted in third down situations.

Even if Coleman gets more carries this year, Freeman will still remain the primary beneficiary in the passing game. Similarly to 2015, where Coleman saw nine or less touches in 9-of-12 games, a lack of passing game involvement severely lowers his floor. I suppose it should be noted that Coleman did take some snaps lined up wide as a wide receiver in the preseason but I don’t see that being a regular occurrence.

Shanahan tends to favor the run in the red zone as well, as his teams have ranked first and seventh in red zone rushing percentage in 2014 and 2015, respectively. Last year, Freeman was the superior goal line back, converting 45.5% of his runs inside the five for touchdowns; Coleman finished at just 20.0% in this category.

That said, Freeman has not been the most efficient back between the tackles or in the passing game. The Falcons have a tough schedule to start the season, and if Freeman's inefficiency on the interior continues, I could buy into the narrative that Coleman could get more touches. Freeman could absolutely spend some time in more of a pass catching, Duke Johnson-type of role. It is noteworthy that Coleman is a higher draft pick and Freeman was not a part of the current Falcons coaching regime.

Coleman’s elite speed and playmaking ability may make him an attractive flier in DFS some weeks, but in traditional seasonal leagues, he may frustrate his believers more often than not.

For now, it looks like both Coleman and Freeman could end up cannibalizing each other for fantasy purposes but the overall pie should remain substantial. It would probably take an injury for Coleman to completely surpass Freeman, but he could still see standalone value by the midpoint of the season if a few things break his way.