Analyzing last week's results is one of the best investments of time you can make as a DFS player. Here I analyze winning lineups, low-owned players, and other notable Week 7 takeaways that can be used to gain an edge going forward.

Ed. Note: This is a free sample of weekly content included in the 4for4 DFS subscription. Not a subscriber? Sign up here! 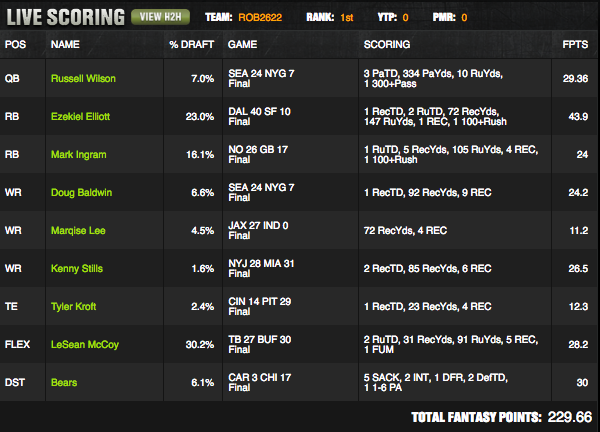 ROB2622 took down the Millionaire Maker with a lineup consisting of chalk at RB at contrarian plays everywhere else. In studying first-place lineups in this tournament, I found that the RB position tends to have the highest ownership. This is mainly due to the position’s top-heavy predictability—the limited amount of backs getting heavy volume will post top scores fairly reliably and tend to separate from the rest of the pack. On the flip side, there’s a lot more variance in passing numbers because yardage is gained in bigger chunks and the average WR or TE sees less volume than the average RB. We had Ezekiel Elliott, LeSean McCoy, and Mark Ingram all as top-six projected RBs in terms of raw points.

If you were among the 93.0% who didn’t own QB Russell Wilson, how could you have landed on him?

Among QBs, we only had Dak Prescott rated with a higher probability than Wilson of hitting GPP value, and while Prescott worked out fine, Wilson was a perfect arbitrage play at $900 cheaper. As has been a trend this season, our GPP leverage scores sniffed it out perfectly, rating Wilson with the top leverage at the position, as noted by TJ Hernandez in his Week 7 slate breakdown.

If you were among the 98.4% who didn’t own WR Kenny Stills, how could you have landed on him?

4for4 had Stills with the second-highest GPP leverage score of all WRs on the main slate. With DeVante Parker out, Julius Thomas struggling, and the team preserving Jay Ajayi for running situations, targets are highly concentrated in the Miami offense, going to either Jarvis Landry or Stills. Both wideouts produced against a Jets defense ranked 22nd in WR aFPA, but with Landry’s ownership and salary much higher, Stills was the higher-leverage play and ended up being more valuable.

If you were among the 94.5% who didn’t own WR Marqise Lee, how could you have landed on him?

Like Stills, Lee is a member of a highly concentrated passing attack and had a good matchup, as the Colts ranked 27th in WR aFPA coming into the game. Lee also provided leverage on teammate Chris Ivory, who ended up being the highest-owned player in the tournament.

If you were among the 93.7% who didn’t own WR Doug Baldwin, how could you have landed on him?

Baldwin serves as a great example of the power of correlation plays. He didn’t particularly stand out in any metrics, ranking as our No. 12 WR overall in raw points and No. 14 in GPP leverage score while facing the third-toughest matchup in the league according to aFPA, but he was, of course, strongly correlated with Russell Wilson, as all QBs and their No. 1 wide receivers are. Like Lee with Ivory, Baldwin also provided contrarian leverage on Jimmy Graham—though Graham should have had a much bigger day but dropped a pass that would have gone for a long gain and another that would have gone for a TD.

If you were among the 97.6% who didn’t own TE Tyler Kroft, how could you have landed on him?

Kroft was our No. 3 projected value at TE heading into the game. He had been playing around 90% of the snaps and had flashed a few weeks earlier with a 6-68-2 line, though it was against the hapless Browns tight end defense.

If you were among the 93.9% who didn’t own Bears DST, how could you have landed on them?

The Bears are another play that doesn’t stand out by the metrics, but thinking outside the numbers, they were simply a solid defense at home against a middling offense. Chicago’s run-heavy philosophy protects rookie signal-caller Mitchell Trubisky, shortens games, and keep opponents' offensive numbers down. 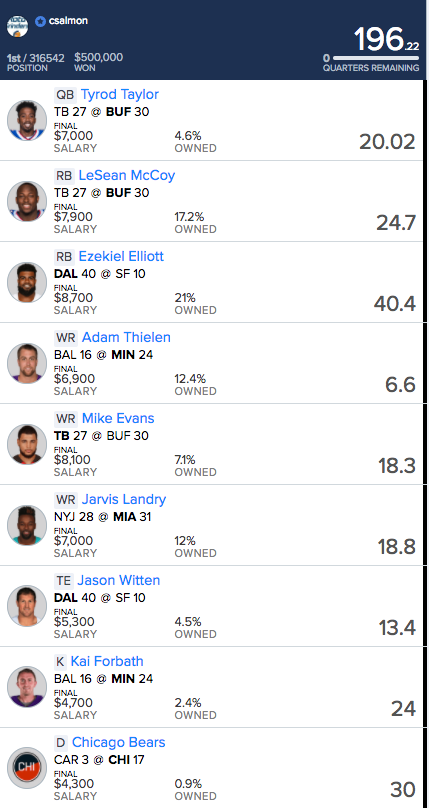 csalmon took down the Sunday Million with a core at RB of Ezekiel Elliott and LeSean McCoy and a core at WR of Mike Evans and Jarvis Landry. Zeke and Shady both had top-four raw point projections among RBs, while Evans and Landry both had top-eight raw point projections among WRs. The key for csalmon was nailing four of the slate’s five highest scores among non-QBs (he only missed on TE O.J. Howard, who scored 24.8 FanDuel points) while getting just enough value out of Tyrod Taylor at QB. Nailing a bunch of the slate’s highest scorers allowed csalmon to offset a dud from Adam Thielen, which provides an important lesson in lineup construction: while it would be ideal to nail all nine plays in a lineup, there are usually 4–6 key plays in a lineup that truly put it over the top, so if there is a certain combination of players you really like, get them in and build the best lineup you can around them.

If you were among the 95.4% who didn’t own QB Tyrod Taylor, how could you have landed on him?

Taylor was the QB TJ Hernandez highlighted on last week’s DFS MVP Podcast and had the third-easiest matchup on the slate against a Buccaneers defense that would have real Buccaneers turning in their grave. While the other two QBs going against defenses ranked in the bottom three in QB aFPA, Marcus Mariota and Matt Ryan, were ranked outside our top 10 in value despite the great matchups, Taylor was our No. 3 value at the position.

If you were among the 95.5% who didn’t own TE Jason Witten, how could you have landed on him?

Witten was a true contrarian play, as he was going up against a 49ers defense ranked third in TE aFPA, but overcame the matchup with a sick one-handed TD catch. The wily veteran’s 13.4 FanDuel points were enough on a slate in which only O.J. Howard (24.8 points) and Evan Engram (15.0) outscored him.

If you were among the 97.6% who didn’t own K Kai Forbath, how could you have landed on him?

We had Forbath with the No. 2 GPP leverage score among kickers, and he checked all the boxes as a home favorite against a Ravens defense ranked 20th in kicker aFPA.

I’ve discussed this before, but it seems like the importance of mobile QBs is increasing—in both real life and fantasy. The top eight fantasy QBs this year average 29 rushes, 149 yards, and 1.3 rush TDs on the season, while the next eight average just 12 rushes, 32 yards, and 0.6 rush TDs. It’s not just the rushing numbers that are important, though, as being mobile also helps escape the rush and keep plays and drives alive, leading to more opportunities for the quarterback and his offense to accrue stats. A quarterback doesn’t need to be as athletic as Russell Wilson or Cam Newton, he just has to be able to move well enough to extend plays and make the defense pay if they give him room to run. I don’t think it’s a coincidence that save for the ageless Tom Brady, the league’s most productive quarterbacks this season—Alex Smith, Carson Wentz, Dak Prescott, and Deshaun Watson—can all make things happen with their legs and average over 4.0 yards per carry.