Studying history is absolutely worthwhile. There’s a quote here somewhere about being doomed to repeat things that have typically been done wrong in the past.

Side note, I’ve nearly mastered the art of misquoting things with supreme confidence — especially when a simple Google search would have led me to the “correct quote”. But where’s the fun in that?

If you research “Optimal MFL10 Roster Construction” for five minutes, I guarantee you will find plenty of absolutes on the “correct” way to draft. But where’s the fun in that?

See what I did there?

“You can get a good look at a T-bone by sticking your head up” … never mind. Okay, we’re officially off the rails.

The point is, there’s no “optimal” way to win an MFL10. When it comes down to it, you still have to pick the correct players. That said, studying past data is absolutely a worthwhile way to lead us in that direction.

The data for this 2016 study consists of 66,600 teams constructed across 5,550 drafts total for MFL10s up to MFL100s. To break even, a person needs to win about 9.5% of their drafts (depending on 2nd place finishes or 3rd for the higher level ones). Let’s take a look at what roster constructions did well — but more importantly decide if there are any worthwhile takeaways to leverage into 2017 success.

Draft position is very important — see the correlation matrix below which highlights the win percentage of each slot from 2016.

You may draw your own conclusions from the matrix, but there are a few things that stand out right away.

Having a pick in the back half of the first round was somewhat of a death sentence outside of Le’Veon Bell (ADP 12.08, RB3) — so it makes sense that the smallest percentage of winners came from this draft position in 2016 and probably got even worse for them after the turn.

Draft position clearly isn’t everything -- roster construction strategy can also have a significant impact on your team.

The following diagram displays the top-10 most common roster construction strategies in 2016 as well as the percent of the total 66,600 rosters for each: 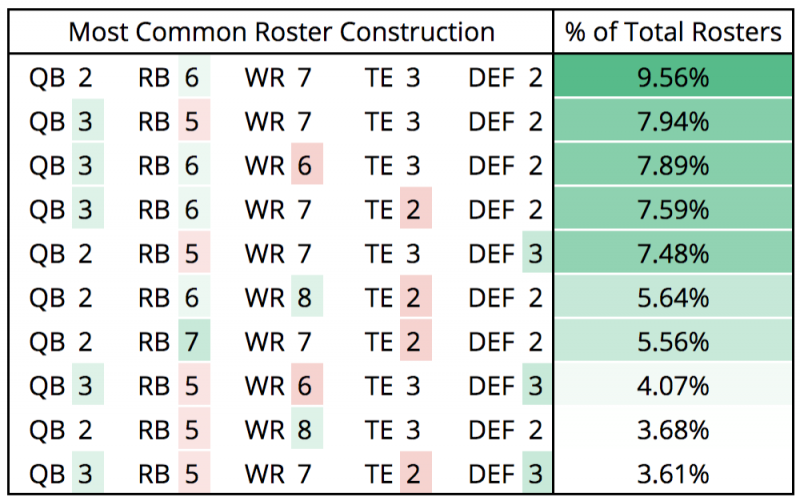 Surprisingly, the percentages of roster construction combinations were relatively flat but the most common was QB2/RB6/WR7/TE3/DEF2 at 9.56 percent.

The following diagram displays the top-10 most common “First Place” roster construction strategies in 2016 with the percent of winning rosters for each: 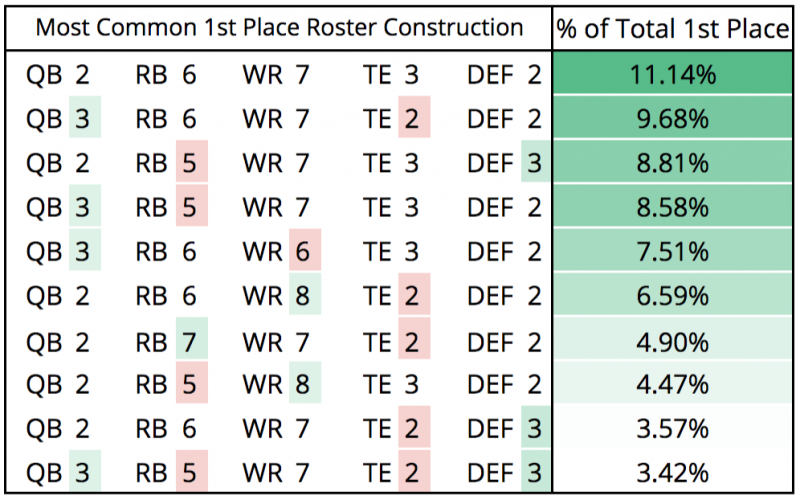 Of the 5,550 rosters that finished in first place, 11.14 percent of those teams rolled out QB2/RB6/WR7/TE3/DEF2 — but this was also the most common type of construction as previously noted.

Now that doesn’t mean QB2/RB6/WR7/TE3/DEF2 is optimal, necessarily — higher volume alone gives those teams more of a “chance” to win than a QB3/RB3/WR8/TE3/DEF3 combination that was rolled out far less frequently.

Note that two DEF teams dominate the top half of this list -- perhaps the idea that using that third roster spot to grab another player at the skill positions is optimal, or perhaps it is just simply more common.

Please keep that in mind as we progress through this study — it’s very possible that less “popular” strategies ended up being more “optimal”. The exact combination of positions may not tell the whole story.

How many first place teams drafted a specific number at a given position, regardless of how the rest of their roster was constructed? How popular was that strategy on a position level relative to the total number of drafts?

Take a look at each position in the table below:

First off, if this chart with all these wonderful heat maps doesn’t make it move you’re probably on the wrong site. This is a great way to visualize which strategies were most popular and which ones produced a high win rate.

For example, the first column is showing that if you drafted two QBs you won 8.96 percent of the time, but also that 50.1% of ALL drafts had two QBs. Now… let’s dig in here.

Most Strategies Can Be Optimal if You Pick the Right Players

Rodgers, Luck, and Brees were all drafted as top-5 QBs but if you were lucky enough to grab Matt Ryan in the 12th or Kirk Cousin in the 10th you probably passed all the Cam Newton (ADP 3rd round, QB16) and Russell Wilson (ADP 5th round, QB10) teams pretty quickly.

It’s not surprising to see a large number of winning teams with a top-5 RB — both David Johnson and Le’Veon Bell were essentially seeing RB1 volume on the ground with WR1 target share through the air.

TE may have produced the most value of the group in regards to actually helping your team win first place. Kelce and Olsen were the only top-5 finishers that were drafted inside the fifth round according to ADP.

Three of five top-scoring defenses were drafted outside the 11th round, but it is probably a better strategy to save your DEF investment until the later rounds with week-to-week scoring being so volatile. This position required a top-5 option less than any other to win.

It’s easy to say all these things, of course you want guys that finish in the top-5 respective to their position, but doesn’t where these players were drafted matter much more for our purposes?

Obviously, it’s great to have the top players — but what really matters is where you got them in regards to their respective draft position.

The following chart has a bunch of names on it that you should have had in 2016. If anyone has their 2017 list handy for this year please send it over to me. 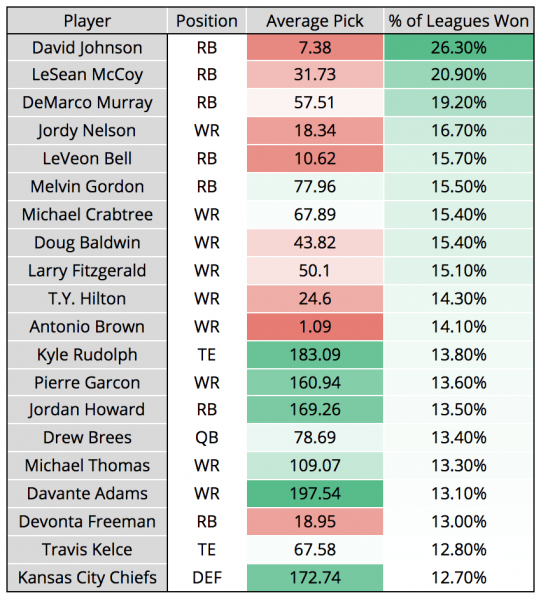 Essentially what this diagram says is if you had said player, you won that percentage of leagues — i.e. over 25 percent of winners in 2016 had David Johnson! What else should we have saw coming?

It makes sense to see some stud RBs at the top of this list, but you also had to pay a premium for them. Going with a heavy RB strategy early can pay off big, but it also carries quite a bit more injury risk historically.

Jordy Nelson is the top WR on this list — 16.7 percent of winning rosters drafted him and probably had to pull the trigger in the second round coming off an ACL tear the year before.

Le’Veon Bell more than made up for the games that he missed early in the season, coming in at just over 15 percent of winning lineups.

Happy to see Melvin Gordon emerge as a value play -- as Rushing Expectation showed us, his rookie year wasn’t quite as bad as people thought, though part of this could be due to Danny Woodhead being lost for the season.

Michael Crabtree was the cheaper and more valuable Raiders WR pretty much all year, in every fantasy format in 2016.

Drew Brees and Michael Thomas won a lot of people leagues last year and coach Sean Payton pulled off the reverse-troll and actually told us what was going on. We probably should have listened.

Aaron Rodgers is alive and Devante Adams is still in the league.

Devonta Freeman was too cheap in drafts with many overestimating negative regression from 2015.

Travis Kelce has always been #goodatfootball, this year we finally saw his target share approach his potential. Jeremy Maclin hobbled most of the year probably helped.

The Chiefs defense was a factory and Tyreek Hill is fast. However, it’s not an accident that just one defense makes this list and they were probably taken around the 15th round of drafts.