When you buy a car do you just go to a dealership and pick the one you like the best? No, there is usually a lot of research that goes into the big purchase before you even arrive at the shop. Which makes are the most reliable? What have other owners said about the car? Is it worth it to go for a cheaper model or will you get a better return on investment in the long run if you spend more?

I wanted to know how the median score of these tiers have performed in recent years, and if the data can tell us when to pull the trigger on a quarterback in our drafts. Below is what I found.

The above table shows the median fantasy points scored for each tier of quarterbacks over the past six years. Obviously, the higher the tier, the more points they score. That doesn’t tell us anything. What does tell us something is each individual column.

Look at this data in the form of a graph: 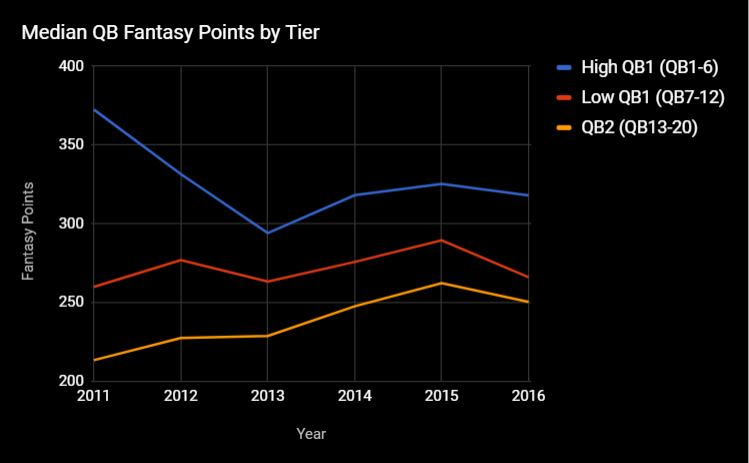 Look at the difference in points per week between the median quarterback in each tier.

What does this mean? Don’t draft a low-end QB1, considering you can get close to the same production multiple rounds later from the QB2 tier. The difference last season shrunk to less than one point per week. Drafting a high-end QB1 could be a viable strategy, too, if the price is right, as the gap between the median high-end QB1 and low-end QB1 has increased two of the past three years.

How do we know all this will happen again? We don't know, but TJ Hernandez studied year-to-year correlations for quarterbacks on the same team in consecutive seasons and found fantasy points per game has one of the higher correlations among fantasy quarterback statistics.

So, let’s look at the best candidates to draft by tier.

Not surprisingly, all of the top-five quarterbacks in fantasy points per game last year are being drafted as the first five quarterbacks in 2017, according to average draft position (ADP)—Aaron Rodgers, Tom Brady, Drew Brees, Matt Ryan, and Andrew Luck.

Over the past two seasons, though, only half of the prior year’s top-six scoring quarterbacks finished as a top-12 quarterback. Scary.

If you’re going to pull the trigger on a top-tier quarterback you want a safe one. Andrew Luck has questions with his shoulder and Matt Ryan lost his elite offensive coordinator after a historic season that could suffer from some regression.

That leaves Tom Brady, Aaron Rodgers, and Drew Brees. In most home redraft leagues, these quarterbacks will go in the first three or four rounds, unlike expert mock drafts where they slip anywhere between rounds three and six.

Russell Wilson is an interesting case. He’s the sixth quarterback off the board in drafts, despite finishing as the fantasy QB11 last year. At face value, you’d normally pass, but Wilson played all of 2016 hurt behind the worst offensive line in the NFL. The line is still bad, but Wilson did have back-to-back top-three seasons prior to his abnormal 2016 result. However, I still think he’s being priced closer to his ceiling than floor.

As discussed above, I mostly have no interest in this tier. The value relative to the other tiers in recent years isn’t there. To use the car analogy again, I’d rather spend more for better reliability or less for almost the same production.

I think two can, and one already has. Newton has four top-five seasons since 2011, but there’s high risk with him coming off shoulder surgery, a career-low in rushing touchdowns and rushing yards, and speculation that a reduced rushing role will continue. However, Mariota is priced one round later and John Paulsen projects him to be a top-five quarterback this season. Through the first 14 weeks of last season, Mariota was fantasy's QB5.

In this tier, we find quarterbacks with ADPs in round nine or later. I’ve found myself targeting many signal-callers in this tier.

For starters, two quarterbacks have four top-12 seasons on their resume since 2011: Philip Rivers (ADP of 9.09) and Matthew Stafford (ADP of 9.08). There are only eight other passers who can boast such a claim: Brees, Rodgers, Newton, Brady, Romo, Ryan, Wilson, Luck. Solid company.

Many 4for4 staff members also love Andy Dalton this year in the 11th round, considering possible positive red zone touchdown regression and two top-12 fantasy seasons on his resume.

Lastly, Tyrod Taylor was QB8 last season, but is QB16 in ADP.