Earlier in the offseason, I wrote about quarterbacks that are touchdown regression candidates based on their 2016 red zone production. Here, I will examine offensive efficiency in the form of yards per drive to highlight four quarterback situations that should have produced better quarterback finishes than they did in the fantasy rankings last season and are targets in 2017 fantasy drafts.

In researching various relationships between overall team success and player-level fantasy scoring, I’ve discovered that yards per drive (Yds/Dr) offers one of the best reflections of expected fantasy points for quarterbacks. Intuitively, this makes sense -- offenses that can move the ball effectively often have good quarterbacks and will have increased scoring opportunities, which translates directly to more fantasy points.

The following graph illustrates the relationship between Yds/Dr and team quarterback scoring: 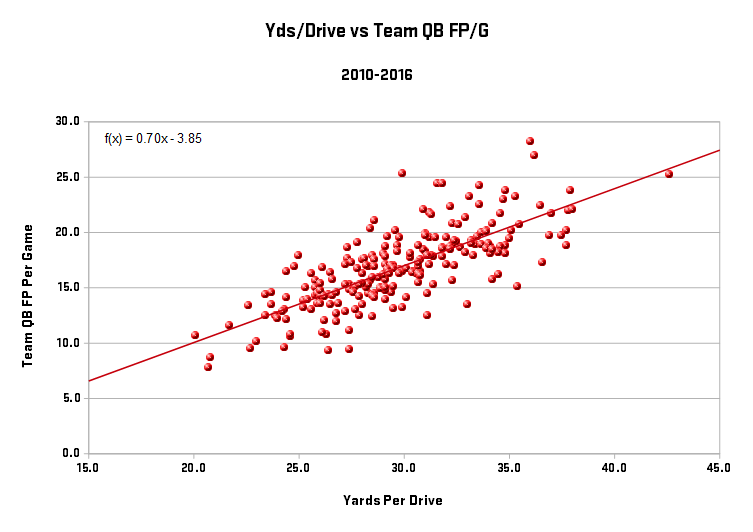 Since 2010, when multiple rule changes began going into effect that has turned the NFL into the pass-heavy league that we know today, a team’s Yds/Dr and quarterback fantasy points per game have a correlation of .77, a very strong relationship. Given how strong this connection is, we can extrapolate an expected fantasy total for every team quarterback using the trendline equation from the data set highlighted above.

While this admittedly isn’t a perfect way to project fantasy points, by comparing the Yds/Dr expected point total for each team's quarterback to his actual points scored, we can get a rough idea of the quarterback situations that may be undervalued going into 2017, assuming there hasn’t been too much change in that quarterback's offense.

Dalton stands out as the biggest positive touchdown regression candidate based on his 2016 Red Zone EV, and a look at Cincinnati’s offensive efficiency confirms that the Bengals should have produced a better quarterback season in fantasy. The Bengals ranked 10th in Yds/Dr, but their inability to punch it in near the goal line led to a season that produced just the 20th-most team QB FPs. Had Dalton reached his 18.8 expected FP/G, he would have finished as the QB7, an end-of-season ranking that is well within his range of outcomes with a full arsenal of weapons at his disposal.

The Eagles’ offensive efficiency was nothing to write home about last year -- they finished 19th in Yds/Dr -- but it wasn’t nearly as bad as their 28th-place ranking QB FPs suggest. As a team, Philadelphia had the worst red zone touchdown rate through the air of any team in the league last season. More passes going toward Alshon Jeffery and Torrey Smith with fewer (none?) going toward Nelson Agholor and Dorial Green-Beckham combined with a year of progression for Carson Wentz could make the second-year quarterback a player to keep your eye on as a QB2 or early-season streaming option.

The Lions scored the 10th-most QB FPs in 2016, but Matthew Stafford is currently being drafted outside the top 12 at the position. This offense is usually one of the more efficient in the league, finishing fifth in Yds/Dr in 2016 and cracking the top 10 in four of the last six seasons. In Jim Bob Cooter’s first season as Detroit’s full-time play caller, the Lions had the second-highest red zone pass rate of any team in the league, suggesting very high upside for Stafford, who has put together back-to-back top-10 fantasy finishes.

You have to squint to see this one, but most people would probably be surprised to know that Chicago ranked eighth in Yds/Dr in 2016. While most of its success was in spite of quarterback play rather than because of it, the team's ability to move the ball could provide some sneaky boom weeks for Mike Glennon (assuming Mitch Trubisky sits for at least a significant portion of the season). You might not think that Glennon will make it on any fantasy rosters in redraft leagues, but if you find yourself streaming in Week 1, it’s worth noting that the Bears start the season against Atlanta, a team we have ranked 30th in aFPA to quarterbacks.