When to Draft a Tight End in Your Fantasy Football League

Fantasy football is a game of relativity and, relatively speaking, the tight end position sucks. Last season, for example, by the time you got to the overall TE5 in half-PPR scoring (Zach Ertz, 143.7 points), you already had the equivalent of the RB28 (Michael Carter, 138.4 points) or the WR33 (Marvin Jones, 143.7 points). We need to be aiming for tight ends who have the upside of finishing the season as the highest-scoring player at the position or ceding the position to stream guys in fantastic matchups. 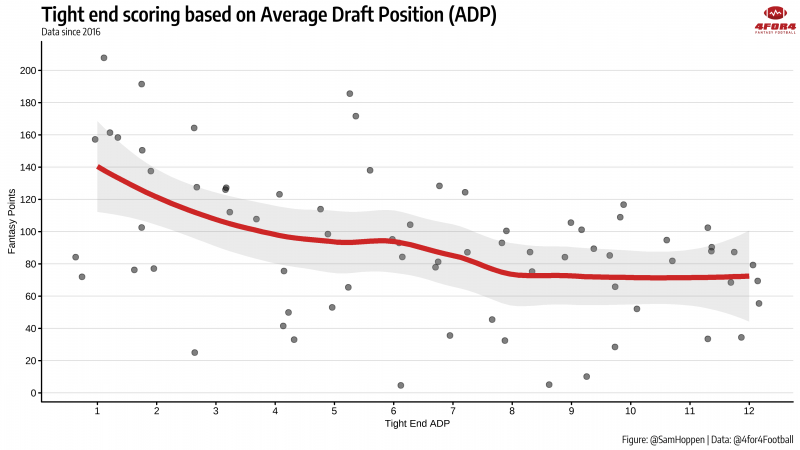 As you can see by the chart above reflecting TE average draft position versus TE fantasy production since 2016, the high-end of tight end production in fantasy typically resides in the first three rounds of your draft. After that, it flattens out quickly and remains like that through most of the rounds. With that said, we always seem to have some players on the cusp of a breakout, and the 2022 season is no different. Below we will break down how to approach the tight end position in 2022 according to draft position, assuming a 12-team snake draft with both positional and overall ADP courtesy of the 4for4 Multi-Site ADP tool.

After an astonishing five seasons atop the tight end landscape, Travis Kelce was finally dethroned by Mark Andrews (ADP: 2.06) last season, and all it took was running the most routes (582) ever recorded by a tight end in Sports Info Solutions’ database (2015-2021). Compared to where Kelce was going at this point last year (1.06), Andrews around the middle of the second round feels like a bargain on paper. The upside begins to take a hit when we take into account that the Ravens are likely to revert back to their old, efficient run-heavy ways with Lamar Jackson back to 100%. During Jackson’s first two seasons as the full-time signal caller, Baltimore was dead last in neutral pass rate, logging a 45.3% and 44.0% clip before ranking 27th with a 52.6% rate in 2021.

Mark Andrews should still command his typical 22%-25% target share in 2022, but I wouldn’t expect that to equate to 150 targets again. Nonetheless, he’s still worth consideration here.