FanDuel has released contests for their Week 1 Main slate. With DraftKings salaries out for nearly two weeks now, I will compare salaries across both sites to search for any major discrepancies. We still haven’t even had a full slate of preseason games, so don’t expect to lock these players into any lineups just yet, but it’s a fun exercise to come back to in a month. 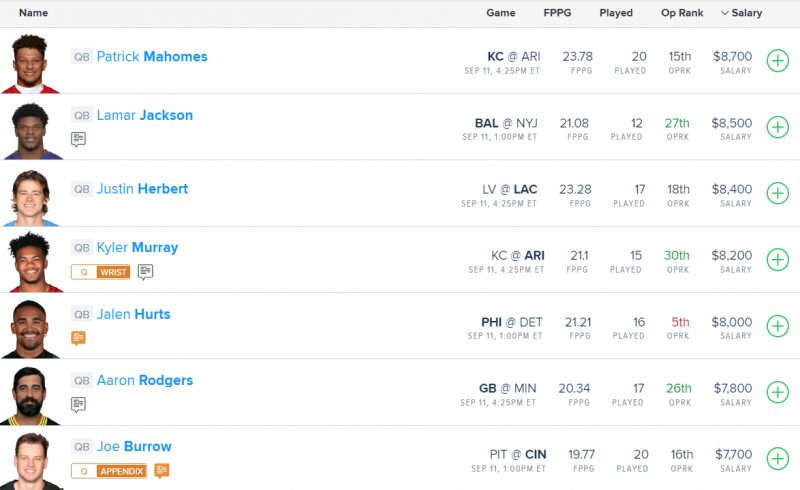 You won’t see many touts covering quarterbacks with salaries this low in Week 1, but it’s notable that Houston’s Davis Mills is priced as the QB25 on FanDuel compared to the QB20 on DraftKings. That makes Mills the biggest FanDuel bargain at quarterback when comparing the two sites. Indianapolis is currently an 8-point favorite in this game on FanDuel Sportsbook, meaning that Jonathan Taylor should see a very high rostered rate. If that turns out to be the case, Mills and the Houston passing game could provide massive leverage off of Taylor in large-field contests such as the Sunday Million.

On last week’s DFS MVP, John Daigle noted Daniel Jones as a first-look bargain with a salary lower than some backups as the QB27. On FanDuel, however, Jones is priced all the way up as the QB12. This inflated salary will almost certainly take Jones out of cash game consideration on FanDuel, but it could be a unique situation where a chalky player on one site goes completely ignored on the other, although New York will be in a tough spot as a big road underdog. 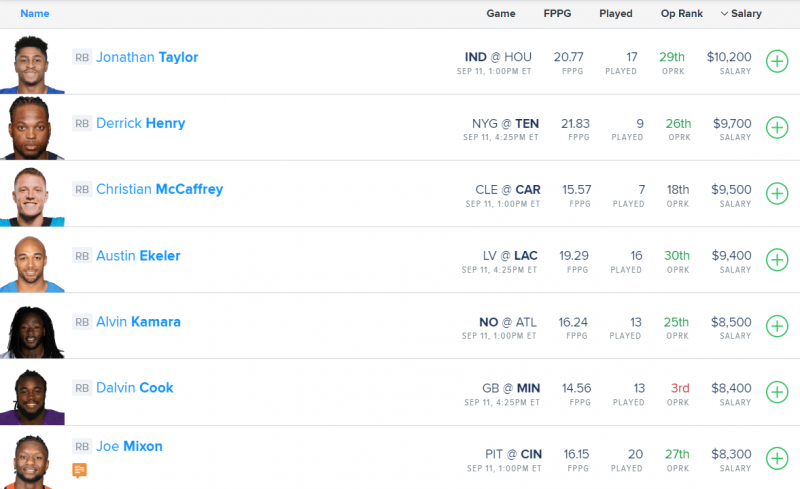 Of all the projected Week 1 starting running backs, Chase Edmonds is one of just two—Clyde Edwards-Helaire ($5,800) is the other—with a salary below $6K. While both are on teams that are favored, Edmonds will be at home. This will likely be a tough matchup, but it’s rare to find a starter this cheap, and there is reason to believe that Edmonds will see a heavier workload than expected this year.

Eli Mitchell appears to be one of the best running back values on DraftKings, carrying the RB27 salary in a game where San Francisco is favored by 6.5 points. On FanDuel, Mitchell comes in as the RB17, just $100 less than all-purpose back Saquon Barkley ($100). This salary is probably still a tad too low for Mitchell, but the discrepancy between the two sites stands out. 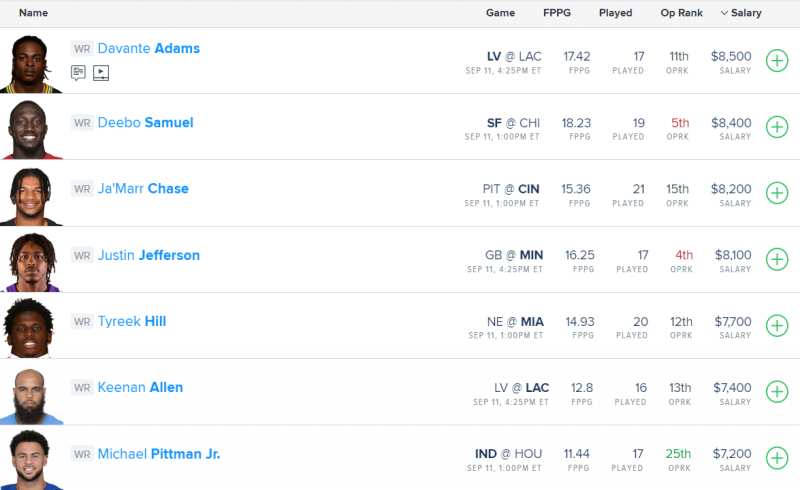 These two wide receivers will face each other in what should be one of the highest scoring games of Week 1—the over/under is 51.5, and the Chargers are favored by just 4 points. Both are priced notably lower on FanDuel than on Draftkings, with Renfow’s WR28 salary on FD vs WR18 on DK and Williams coming in as the WR14 vs WR7. Since Renfrow benefits from DraftKings’ full-PPR scoring, the price discrepancy makes some sense, but Williams’ downfield, boom-or-bust nature actually suits FanDuel more than DraftKings. It should be very easy to stack this game with either player here, and both may end up being cash-viable.

Michael Pittman Jr. is one of my favorite players to target in redraft and a player that shines in Matt Harmon’s Reception Perception. The Colts will project for a lot of points in this game, but that still doesn’t justify Pittman’s WR7 salary when he is the WR24 on DraftKings. The one positive of this high price tag is that anyone thinking about using Pittman as a leverage play off of Jonathan Taylor may get him at extremely low ownership on FanDuel with this price tag. 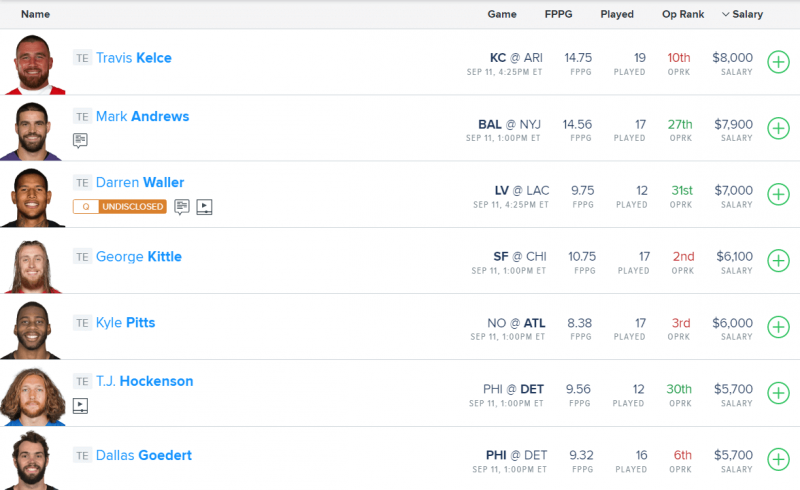 The Browns tight end is one of 4for4’s favorite 2022 breakout tight ends, and DFS players willing to roll the dice in Week 1 can do so with some tremendous value. David Njoku isn’t necessarily expensive on DraftKings, but he is the TE11 by salary, while he is just the TE16 on FanDuel. His likely Week 1 quarterback, Jacoby Brissett ($6,300), is priced near the quarterback minimum, making a punt stack that will likely prove to be a leverage play off of a popular Christian McCaffrey.

Darren Waller is priced in a tier below Travis Kelce ($8,000) and Mark Andrews ($7,900) but is still $900 more expensive than the next tight end on the slate. In absolute terms, Waller’s TE3 salary on FanDuel isn’t a huge jump from his TE5 salary on DraftKings, but at the top of the position, that difference is worth noting. As mentioned above, this is a game that will likely have big tournament implications, meaning Waller’s high salary only emphasizes the discount on Renfrow. 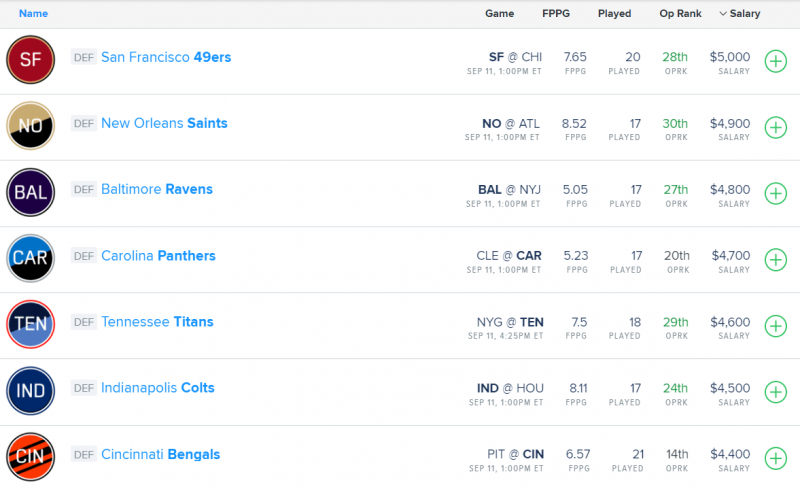 Even beyond Week 1, there are almost always some notable cross-site bargains at defense. In a likely high-scoring contest, Arizona is the DEF19 on FanDuel compared to the DEF13 on DraftKings. Despite being a near-touchdown underdog, Chicago is oddly priced up on FanDuel and ranked as the DEF13 by salary but coming in as the DEF 23 on DraftKings. The Cardinals would offer massive leverage on defense since this will likely be one of the highest-owned games in GPPs.