Streaming Defenses Works, Here’s How to Do It

The “Fearsome Foursome”. The “Purple People Eaters”. The “Orange Crush”. The “Steel Curtain”. The “Big Blue Wrecking Crew”. The “Monsters of the Midway”. The “Legion of Boom”.

Even casual NFL fans have likely heard of at least one of these tremendously talented and successful defensive units from throughout football history. Maybe your favorite team is on this list, or maybe your favorite team was a regular victim of one of these devastating defenses. Either way, units like these skewer themselves deep into the psyches of even the most offense-focused football viewer, leaving an indelible impression that – maybe, just maybe – elite defense really does win championships.

While sometimes true in the NFL, that impression is a load of “Gritz” in fantasy football.

You don’t need to draft the best defense to win in fantasy football, and – in fact – drafting your D/ST earlier than anyone else is often detrimental. If you’re patient about drafting your defense instead of aiming for a plug-and-play unit, you maximize your draft capital, increase your chances each week, and improve your odds of hoisting that virtual Lombardi Trophy at the end of the season.

But how should you go about “streaming” to fill your D/ST slot this season, and what is the best way to make the most of this anti-elite strategy? That’s what we’ll investigate here.

If you don’t know already, “streaming” means the practice of adding and starting a player or unit each week on a per-matchup basis. As I’ll show later, this strategy has wide-reaching effects on maximizing the value you can accrue for your fantasy teams.

However, it’s particularly possible to utilize streaming for defense (as well as kicker, quarterback, and tight end) because it is typically a “onesie” position. This means most fantasy leagues only make you start one D/ST per week. Since each team needs just one defensive unit, fewer are needed to fill starting spots across the league. Since fewer are needed across the league, better defenses will remain available to pick up on the waiver wire each week.

Replacement level and VORP are important to understand because they are the reason you can stream onesie positions consistently and successfully. The table below shows the 2020 replacement level value for positions in a standard fantasy football league – where you start one quarterback, two running backs, three wide receivers, one tight end, one kicker, and one defense. I also include the top player at each position and their VORP to demonstrate how these positional values differ.

As you can see, replacement level points stay pretty high for quarterback, running back, and wide receiver. Due to the sheer dominance of elite tight ends, the top options at that position have just as high VORP as running backs and receivers.

Even quarterbacks and tight ends seem statistically scarce when compared to kickers and defensive units, however. The only two positions with their top player in just double-digit VORP, this is the statistical reason why fantasy analysts tell you to wait until the last two rounds of your draft to fill these spots.

The chart below shows just how flat the tier of fantasy D/ST options is when drafting, compared to the other offensive positions. 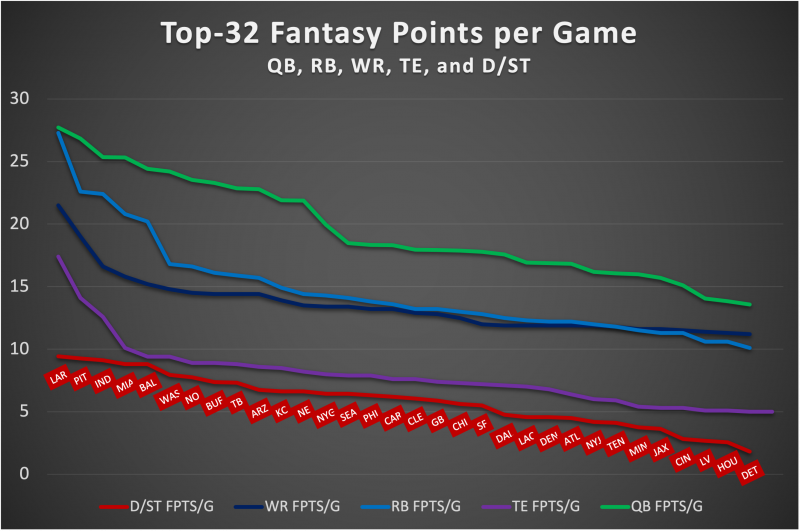 Not only do defenses score less on average than top-32 fantasy players at other positions, but the drop-off from elite to just okay is also far closer to “steady decline” than “precipitous cliff”.

Even worse, we’re really bad at predicting which defenses will be good and bad in the preseason. The average fantasy finish for the top D/ST drafted over the last three years is 18th or 19th. Even if we extend that to the top-12 drafted defenses by historical ADP – theoretically all the startable D/ST units – they average an end-of-season ranking of 12.3 or just lower than replacement level. The average top-12 end-of-season fantasy D/ST? They are drafted on average in the early 13th round, as the D/ST12.

You don’t need to pay up for defense, and it often will come back to bite you if you do. So, how can we avoid this pitfall?

The process of streaming starts on draft day, with determining which D/STs both a) won’t force you to draft them higher than a late-round pick, and b) have good early-season schedules.

On the former point, we don’t want to invest a ton of draft capital in this defense because we’ll be likely dropping them after Week 1 to play another matchup. Draft capital is the theoretical value that you spend when you use a draft pick. Maybe you’ve heard of the Jimmy Johnson draft pick chart? This is just one way to go about quantifying draft capital, but the long and short of the notion is the earlier the pick is, the more draft capital it holds because better players are available with it.

As I mentioned before, we’re bad at pegging in the preseason which D/STs will end up atop the pile at the end of the year. The top defensive pick has really been bunk in recent years but has been selected on average as the 93rd overall draft pick, or the 8.09 in 12-team leagues. That point in the draft last year would have yielded the choice of end-of-season QB1 Josh Allen, eventual WR17 Marvin Jones, WR24 Diontae Johnson, QB8 Tom Brady, or WR20 CeeDee Lamb. Perhaps players like 2020 RB12 Antonio Gibson would have fallen to that spot in your league, or even WR15 Brandin Cooks, WR28 Will Fuller, or RB21 J.K. Dobbins.

This is the cost of poorly-spent draft capital. Would you rather have a league-winning fantasy quarterback, running back, or wide receiver in the eighth round, or would you prefer a bottom-third defensive unit? The answer is clear. If you instead waited to draft one of the last three supposedly startable defenses in the 14th round, you’d have ended up with the New Orleans Saints (D/ST7), the Indianapolis Colts (D/ST3), or the Tampa Bay Buccaneers (D/ST9).

Early in the Season

When we stream, we’re acknowledging the fact that D/ST scoring in fantasy football is much more correlated to the strength of the offense they’re opposing than it is of the defense itself. This isn’t to say that transcendent defensive players can’t show up well against great offenses; we’re instead playing the odds. With this, we’re saying that if given a choice between taking Aaron Donald against Patrick Mahomes or Trey Hendrickson against Drew Lock, we’d prefer the latter.

By using our Hot Spots tool, you can see which team defense in each week is lined up to have a tremendous matchup, helping you figure out your D/ST to draft and your early-week waiver claims. For instance, even though our models currently project the New York Giants D/ST as just the 21st-best fantasy defense for the full season, they draw a home contest against the lowly Denver Broncos in Week 1. This makes them one of the better streaming targets to go after out of the gate in 2021.

The Giants make an especially savory draft target because they have an ADP ranking no earlier than the 20th round. A team like this has all the hallmarks of an outstanding Week 1 streaming target.

So, there you have it; streaming defenses is easy! Step 1: wait to take your D/ST until later in the draft than most (or all) of your league-mates. Step 2: select a unit with an easy matchup, and an easy early-season schedule beyond then if possible. Step 3: drop them like a hot potato just before they run into a good offense, and repeat Step 2.

Some of you might be screaming at your device right now, “Streaming sounds all well and good, but what if we luck into a defense that turns out to be elite? What if our streamer becomes a legit option every week?” First of all: congratulations! That will happen from time to time, and in fact, about five defensive units each season go from undrafted to startable (top-12), while about two undrafted D/STs become top-half starters. Second, I’d genuinely recommend shopping your newly-ascended elite D/ST to your league-mates and see if you can swap them – who you got for free – for someone going the range of where the top tier of D/ST was drafted. Think along the lines of DeVante Parker, Evan Engram, J.D. McKissic, and Rashod Bateman as targets to trade for in the same range as the D/ST1 by ADP right now.

If you want to get more granular with your research than the simple, easy-to-read number that Hot Spots gives you, look at our offensive KnowledgeSeeker Reports and target an offense passing less often and for fewer yards; that’s the best way to find a likely solid matchup to start your fantasy D/ST against.

As for targets in the last round of your draft, the Denver Broncos are a team to highlight. They have the easiest projected average matchup from Weeks 1 to 3, facing the New York Giants, Jacksonville Jaguars, and New York Jets in that span of time. They are currently being drafted as the D/ST14 and going in the mid-17th round of drafts. The Giants, Jets, and Jags all also have pretty soft early schedules and cost little draft capital to acquire.

Feel free to reach out on Twitter @TheIDPGuy if you ever have a question about your D/ST selection process; I’ll be happy to answer questions and help you through it. Happy streaming!