On the backside turn of a draft, I’m most likely going to target an elite wide receiver or pass-catching back in the first round, unless one of the top tight ends happens to fall. One disadvantage of being on the turn is the chance to get stuck on the wrong side of a positional run, so evaluating opportunity cost is paramount in these first few rounds.

In this edition of the series, I'll be walking through a perfect draft from the 12th slot in a 12-team Yahoo half-PPR league. Each pick was optimized using projections and value-based rankings from the 4for4 Draft Hero tool. 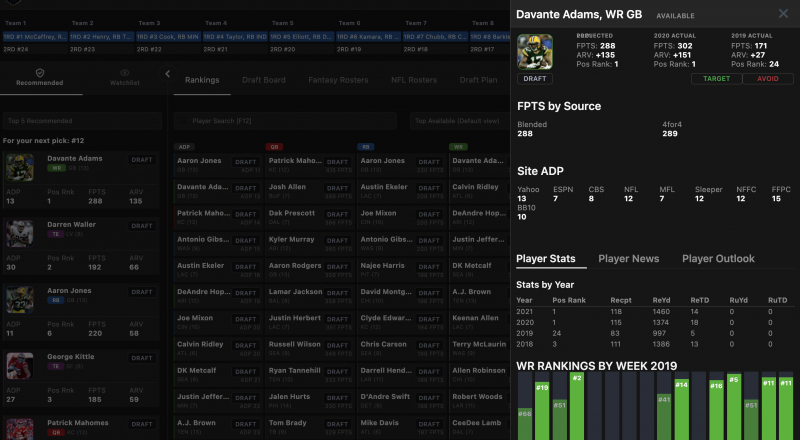 When the top receiver is still on the board at the 1.12, this pick is a no-brainer. Davante Adams is a fantasy machine, finishing as either the WR1 or WR5 in each of the past four seasons in half-PPR points per contest. He and his quarterback are both playing with mountain-sized chips on their shoulders this season, which may translate to high production, as angry players can make great fantasy assets.

This next pick will be a tad more difficult for me as I see a few players I have my eye on as I make the turn. I could go for a pass-catching back which is an advantage for any format that awards points for receptions or one of the elite tight ends since only Travis Kelce is off the board.

Each round, Draft Hero suggests the top available suggestion along with four alternatives, as shown at the top of this section. Throughout the rest of the article, I will note those suggestions as well as my top alternative to the player I actually selected.