In the double-digit spots of a draft, I’m most likely going to target an elite WR in the first round, unless one of the top RBs or Travis Kelce happens to fall. One disadvantage of being on the turn is the chance to get stuck on the wrong side of a positional run, so evaluating opportunity cost is paramount in these first few rounds. A positive is the ability to implement game theory in this draft, meaning you can look at the manager’s roster in the 11 and 12 spots and put off a QB or TE for another round if they’ve already fulfilled that particular position.

In this article of the Perfect Draft series, I'll be walking through a draft from the 10th slot in a 12-team Yahoo half-PPR league. Each pick was optimized using projections and value-based rankings from the 4for4 Draft Hero tool. 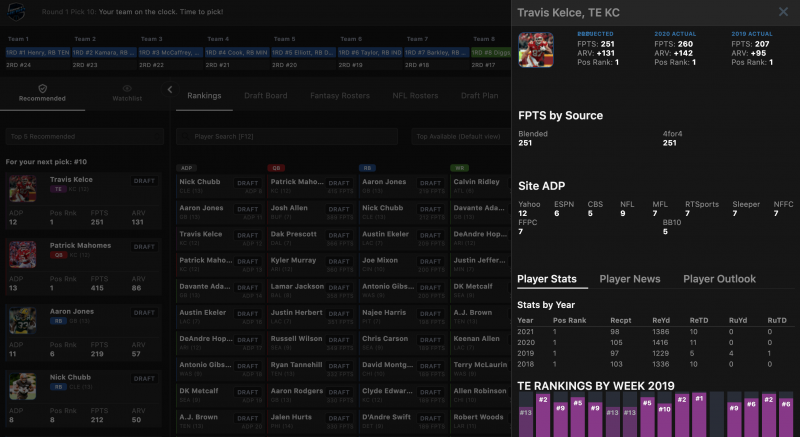 I was excited to see Travis Kelce fall to me here, as he’s been going a few picks earlier in different formats this summer. Locking up the clear TE1 this early will allow me to focus on the other positions for the remainder of this draft, with one of the largest volume players already on my roster. Kelce posted the seventh-highest non-QB half-PPR points last season and is set up for another monster year in Kansas City.

As expected, the first round was very RB-heavy, with only Tyreek Hill and Stefon Diggs leaving the board. I debated Davante Adams here, but with all the drama surrounding both him and Aaron Rodgers, he's been slipping and should be there for me at the turn if I still want him.

Every round, Draft Hero recommends the top available suggestion along with four alternatives, as shown at the top of this section. Throughout the rest of the article, I will note those suggestions as well as my top alternative to the player that I actually selected.