The eighth pick of fantasy drafts is a prime spot to try out the Zero-RB draft strategy. Essentially, this type of drafting involves loading up on receivers, tight ends, and quarterbacks in the earlier rounds, largely ignoring the running back position. Then, after filling out those positions, you can take a lot of shots at running backs in the later rounds. The strategy was created to help fantasy managers take advantage of the increasingly pass-heavy NFL, and avoid injury risk with elite running backs. One of the obvious advantages of deploying this strategy is the immense depth you will have at the receiver position.

One of the downsides is that if the shots you take at running back don’t pan out, you might be scrambling to find starting-caliber players during the season. If you do choose to use such a strategy in your drafts, the most important thing to keep in mind is always be flexible. While you might have decided to only take a running back late in drafts, if Derrick Henry falls to your selection at eighth overall, then definitely take Derrick Henry. 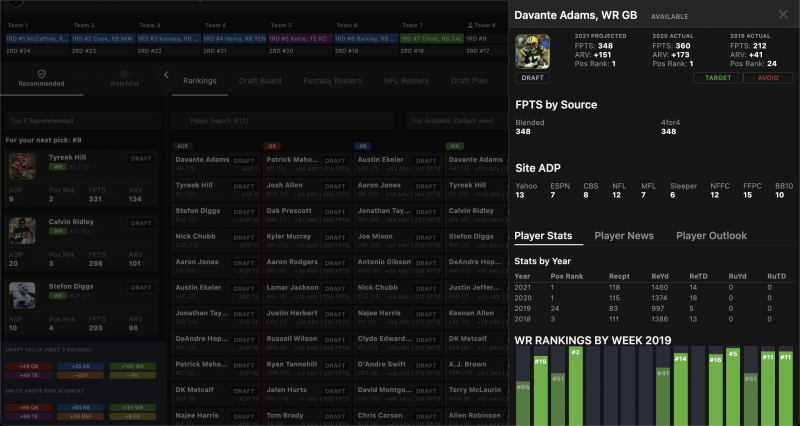 What better way to start my Zero-RB draft than with the best wide receiver in the NFL. With six running backs and a tight end going off the board in the first seven picks, the stage was set perfectly for me to grab a receiver. Adams is coming off of one of the best fantasy wide receiver seasons of all time, where he put up 115 receptions for 1374 yards and 18 touchdowns en route to finishing as the overall WR1 and earning first-team all-pro honors. With the Aaron Rodgers drama finally over, there should be very few questions marks surrounding Adams. He’s one of the most prolific route runners in the league and is nearly automatic in the red zone. This lethal floor-ceiling combination makes him a sureshot WR1 for fantasy this year.

If you don’t want to take Adams, Chiefs receiver Tyreek Hill is another viable option. Hill had a superb fantasy season last year, and will likely be dominant again. Bills wideout Stefon Diggs is also a solid pick here.