While the long wait until round two is not fun when you hold the first overall pick, the ability to draft the best fantasy player the world has seen since LaDainian Tomlinson in Christian McCaffrey makes it a much easier pill to swallow.

What's important when drafting first overall is not having your draft be dictated to you by the rest of the league. This becomes fairly evident with your second pick. If there was a big run on running backs, don't be afraid to select an elite tight end. I'm always looking to build positional advantages with my draft. With Christian McCaffrey already locked in at running back, there's a very good probability my running back group is going to be one of the stronger ones in the league. Add an elite level tight end, for example, provides me with two positional advantages. I'd rather select one of the best tight ends as opposed to the 12th-best wide receiver or 15th-best running back.

In this article, I'll be walking through what a Perfect Draft might look like when drafting from the first overall spot in a 12-team half-PPR league on ESPN. Each pick was optimized using projections and value-based rankings from the 4for4 Draft Hero tool. For a comprehensive tutorial on setting up Draft Hero for your league, read our Draft Hero Walkthrough. 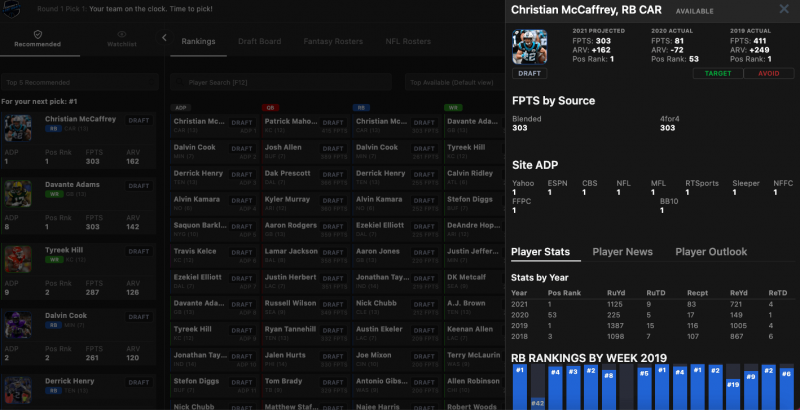 There was no other option here. If you have the No. 1 pick, you must absolutely draft Christian McCaffrey, who has averaged 26 fantasy points over his last 19 games. Twenty-six! What he's doing on a regular basis is absolute insanity. He is far and away worthy of being the first pick in any draft in any draft setting. That is how ridiculously good he is. I'm excited to see what the offense will look like in year two of Joe Brady's tenure.

My Top Alternative: None