Drafting from the fourth spot in 2021 will most likely have me taking an elite running back unless it’s a league with TE-Premium scoring, which this one is not. When situated close to the turn of drafts, game theory can come into play, where managers can take a look at nearby teams’ rosters and foreshadow what positional direction they’re likely to go.

In this article, I will walk through a perfect draft with the fourth pick in a 12-team Yahoo! half-PPR league. Each pick was optimized using projections and value-based rankings from the 4for4 Draft Hero tool. 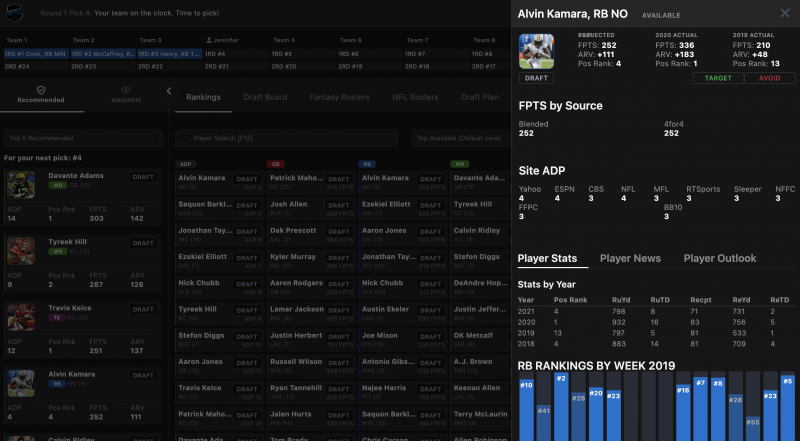 My plan was to take either Alvin Kamara or Derrick Henry, so no surprises here. Kamara was already an elite running back and gets a boost with Michael Thomas set to miss time. In the eight games without Thomas over the last two seasons, Kamara averaged 20.5 touches per game, which translated to 27.3 half-PPR points, enough for overall RB1 numbers.

With a Top-4 RB on my roster, I’ll most likely focus on wide receiver and tight end (if one of the elite falls) for the next few rounds, and grab an RB2 a little later in the draft.

Every round, Draft Hero recommends the top available suggestion along with four alternatives, as shown at the top of this section. Throughout the rest of the article, I will note those suggestions as well as my top alternative to the player I actually selected.