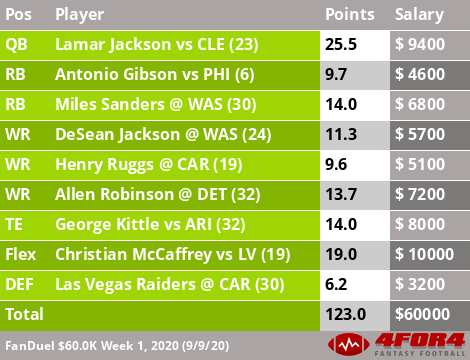 It’s always tough to suggest fading Christian McCaffrey ($10,000), especially when he’s our top value at running back. However, this is a new Panthers offense. There are some questions if McCaffrey will get the same snaps or workload as last season, specially early on the season. Also, moving down would get us in range to upgrade Antonio Gibson and jam in two potential workhorses. Joe Mixon ($7,300) and Austin Ekeler ($7,700) are the next top projected values at running back. It may not be necessary to fade McCaffrey but it’s definitely more of a debate this week than it ever was last season.

Update: With Miles Sanders being ruled out, the latest version of our optimal lineup recommends slotting Kenyan Drake ($6,600) into his spot.

Allen Robinson ($7,200) is a player I’ll be all over on DraftKings but I don’t trust the offense to put the ball in the endzone. I’d rather pivot on FanDuel over to a receiver with a similar target share but more potential to find the end zone. Chris Godwin ($7,700) costs a bit more but Mike Evans is battling a hamstring injury and may be limited. The Saints and Buccaneers have the highest projected total on the slate. Calvin Ridley ($6,600) is a pay-down option for the second-highest projected game of the slate and has shown a knack for finding pay dirt. He also had at least 75 receiving yards in four straight games to close the season.

The Las Vegas Raiders ($3,200) are a cheap defensive option but not all that exciting. The Raiders had the fewest takeaways in the league last season and are going against a quarterback in Teddy Bridgewater that doesn’t take a ton of chances. They are fine if you’re going with a full jam in your studs approach but I’d prefer to find a way to move up to the Colts ($3,700). 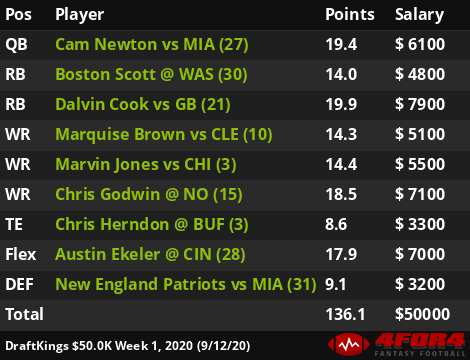 Note: DraftKings requires two players to be locked to produce an optimal lineup. In this case, those players were Cam Newton and Chris Herndon (established in the original article).

Chris Godwin ($7,100) is our second best value at wide receiver on the slate. However, you can gain $600 simply by moving down to Allen Robinson($6,500) our fourth best value. The Lions defense allowed the most receiving yards in the league last season and the fourth most passing touchdowns per game. They did attempt to address it by adding rookie cornerback Jeff Okudah but it remains to be seen if that makes an immediate impact. Robinson closed out last season receiving double digit targets in six straight games.

Marvin Jones ($5,500) appears to be in a good spot for targets with Kenny Golladay getting ruled out due to injury. However utilizing the $600 we gained from dropping down to Allen Robinson, we can move up to Calvin Ridley and gain exposure to the Falcons and Seahawks 50 point over/under. Ridley had at least eight targets in three of his last four matchups last season.