The league has come a long way. Analytics and evidence-based decision making has improved how some teams approach both in-game play and roster moves. Running back, a position primarily controlled by a single player has been split into committees with multiple roles. Offensive schemes maximize talent with zone and gap reads for wider lanes. And, most notably, quarterback build.

Their prototypical size was 6’4”-225 lbs with varying degrees of acceptance. The mold has been held by Peyton Manning, Tom Brady, and Ben Roethlisberger. It’s been challenged by Drew Brees, Russell Wilson, and the emergence of Baker Mayfield. The belief that a quarterback should meet specific height and weight requirements has given rise to several narratives consistently disproved by the veterans we see on the field to this day.

“He won’t be able to see his receivers over the linemen.”

“He won’t hold up after getting hit by NFL-caliber linebackers and safeties.”

Quarterback prospect evaluation, for better or worse, highlights the process flaws in the NFL draft community. Throwing velocity marked the 2017 class. Generational attitude headlined the 2018 class. Now size enters the fray as the Arizona Cardinals make Kyler Murray the face of the franchise. In a complete overhaul from 2018, let’s look at the quarterback, the offensive scheme, and what we can expect in 2019.

The Guy Who Replaced Baker Mayfield

College data doesn’t care about weight or height. Just what can be done on the field. At a glance, Kyler…stands above them all.

Efficiency. TD Rate. QBR. Expected Points Added. Murray’s greatest comparison is Baker Mayfield when looking at quarterbacks taken in the early first round over the past couple seasons. The two-sport phenom continues to break the mold. His 69% completion rate (second-best in the group) is not only a testament to his skills as a passer, but another knock against the height narrative. From a purely numbers-based approach, the Sooners couldn’t have asked for a better successor after Mayfield left for the NFL. And, of course, this doesn’t account for the additional production Kyler brings to the field.

Kyler Murray’s rushing ability instantly grabbed the attention of the fantasy community. The notion of a quarterback who could rush for 1,000 yards in a single season while outpacing his peers as a passer was all dynasty managers needed to see. The logical (or imaginative) scenarios easily take shape.

“If Josh Allen can nearly average 80 yards and a touchdown over the final six games without once topping 250 passing yards, what could Kyler Murray do?”

“If Baker Mayfield with a receiving corps headlined by a primary slot receiver can break the NFL rookie touchdown record, what could Kyler Murray do?”

The transition from college to the NFL depends on multiple factors. Personnel, coaching, and offensive scheme are what factor into projecting fantasy value. While the mesh concepts, constraint plays, and the use of hybrid a tight end confused most of the Football Bowl Subdivision (FBS), there are multiple traits Murray brings to the field enhancing the play design. Three games were charted to add video analysis to the profile. Each was against ranked opponents to properly assess Murray’s traits ahead of the NFL. They were:

Completion percentage is a binary quantitative metric that simply asks if the intended pass was caught or not. Accuracy asks different questions of the quarterback. The vectors of both the receiver and the surrounding defenders must be accounted for prior to the pass being delivered. A receiver’s ability to extend plays through YAC is correlated to the quarterback’s ability to not only put the ball in the receiver’s hands but in his path of motion. The process of throwing, catching, and turning downfield must be seamless to maximize the receiver’s talents past catching the football and, again, Kyler stands out. 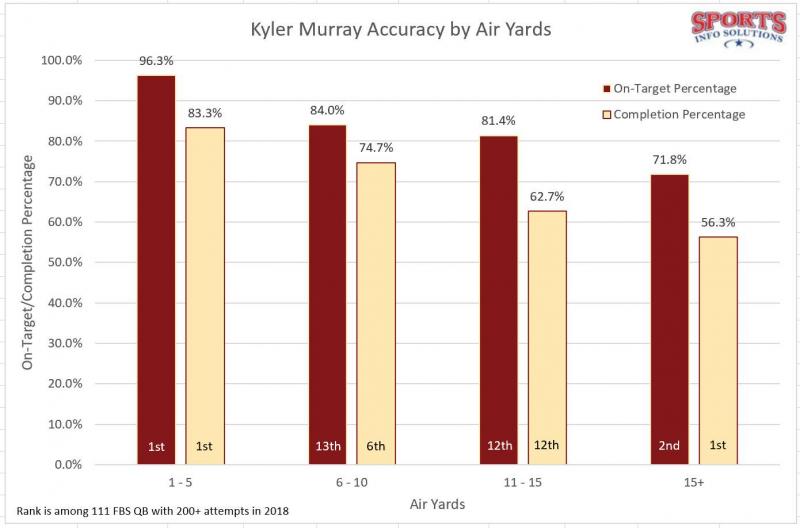 Murray’s strong completion percentage (second in the 2019 class) was complemented by his ability to put his receivers in situations to win. Josh Rosen was unable to hit these marks while under center for Arizona in 2018.

However, the defense for Rosen is simple. The team was lacking in both personnel and offensive continuity throughout most of the 2018 season. Rosen did enter the league with a worse collegiate completion percentage, but this is not an indictment of the player. This serves as an analytical and situational observation as Kyler benefits in both areas where Rosen was shorted. The heralded ‘Kyler-Kingsbury’ connection. Arizona adding three receivers and two offensive linemen through the draft. Murray enters into the positive, supportive situation any rookie QB deserves. Plus, with what the Cardinals have added and retained on offense, it will make a massive step forward in 2019.

A common knock against dual-threat quarterbacks is their perceived tendency to tuck and run. ‘First read and go’ quarterbacks have a limited lifespan and the ‘dual’ in dual-threat has to keep defenses on their heels (reeling back to cover multiple parts of the field) rather than on their toes (rushing forward in anticipation). Kyler exhibits this trait.

While diagnosing pressure, Kyler keeps the ball out and his eyes downfield. Regardless of what he knows he can create with his legs, Murray understands the greater offensive efficiency through the pass. As linebackers move forward in pursuit, throwing lanes open and receivers have one less defender on them. Despite the loss on the big stage, Murray demonstrated this against one of the best defenses in the NCAA. The arm strength appears effortless and the real-time adjustment to the defense is something Arizona sorely needs. But this same skill can also get the NFL rookie into trouble.

His eyes remain downfield, but while navigating the collapsing pocket he holds the ball low and away from his body. Against Alabama, it was kept high and near his shoulder. He has exhibited progress in this respect, but adjusting to NFL speed can bring back old tendencies. Murray will be faced with constant pressure behind the Cardinals’ offensive line and this is one trait that must be monitored during his rookie season.

It’s not much of a surprise that Murray declined to perform the speed drills throughout the draft process. He's proclaimed himself to have 4.3 speed and it shows as he weaves through traffic.

Kyler’s longest runs in each game charted were: 67, 55, and 25 yards. He broke the century mark in all three. He scored a rushing touchdown in all three. The #KonamiCode magnifies his full on-field talent as defenses must account for both threats at a moment’s notice. Alabama’s defensive line (led by third overall pick Quinnen Williams) generated enough interior pressure limiting Murray’s ability to create. Couple this with his penchant for carrying the ball away from his body resulting in turnovers and the Cardinals’ will face unnecessary struggles in 2019.

Oklahoma’s offensive line was fourth in line yards indicating they were able to create running lanes for Murray. Arizona was 25th in 2018. It’s here where Kyler will face his true test as an NFL quarterback. As defensive coordinators learn how to apply pressure, the rookie’s response under duress will be illuminating. Alabama provided the blueprint, but Kyler’s raw athleticism can provide what the Cardinals need to stay on schedule.

The Beginning of a New Age

Kyler Murray attempted 86 passes over the three games charted. His completion and accuracy ratings over the sample are provided below.


Initial takeaways jibe with consensus analysis. Murray can connect with receivers all over the field. What he’s demonstrated as a passer negates any stature-drive narrative produced by the public. There were 2 passes deflected at the line of scrimmage recorded in the sample. He had a total of five in 2018. Daniel Jones (6’5”) had 12. Drew Lock (6’4”) had eight. This speaks to his throwing mechanics and the offensive power Lincoln Riley was able to maintain in 2018.

But what can we expect from the Arizona Cardinals in 2019?

Kingsbury getting hired started the speculation that an Air Raid philosophy was going to be installed in Arizona. Drafting Kyler Murray ensures this will be a reality. Murray ran every charted pass from either shotgun or pistol formation with a running back and hybrid tight end as extensions of the passing game. This is typical for an Air Raid offense. David Johnson receives an instant boost as fantasy managers look back on his 120 targets from 2016. The real question lies with the receivers.

Christian Kirk and Larry Fitzgerald are the likeliest to benefit early on from the new system. It’s no secret that Fitzgerald primarily works out of the slot and operates in the ranges Murray performs best. Kirk can produce similarly. Kingsbury tried recruiting Kirk out of high school when Kingsbury was the offensive coordinator and quarterbacks coach at Texas A&M. Kirk’s size points towards slot receiver, but his 45.5% slot rate in 2018 suggests otherwise. He had a 69% catch rate from the outside while producing the most first downs by a Cardinals’ wide receiver from this position. Kirk’s versatility will earn him playing time in multiple formations as the offense grows and he continues his rehab from foot surgery. Dynasty owners should be excited by Kirk’s future opportunity as the Cardinals continue to build.

Andy Isabella and Hakeem Butler, from a schematic fit, are exactly what the offense needs. At 5’9”, Isabella’s speed and technique were used out of the backfield on jet sweeps, from the outside on cross patters, and deep outs. Hakeem Butler has a similar utility. His fall in the draft is still bewildering to some draft analysts, but at 6’5” the imagination can run wild in the Cardinals’ offense. Both offer tactical value, but rookie wide receivers generally don’t have standalone value as rapport with their quarterback needs to be built prior to a breakout.

It all intersects at Kyler. The offensive line issues. Ushering in a ‘new age’ of pass-first football. It rests on his shoulders. It’s unlike anything the NFL has seen before. Arizona has bought into an offensive philosophy with a head coach having prior connections with the key offensive players. The team then follows up with using draft capital to build around that scheme. It all fits. The college production testifies on his behalf while admitting flaws he’ll need to work on to continue to perfect his game. Regardless, it’s difficult to see him not succeeding in the league.

The realities of the NFL will be tough. Game speed, defensive coordinators developing new looks, and injuries/declining health throughout the season will all take their toll on the first-year squad. Fantasy managers should be interested in the rookie QB regardless of format. Mitch Trubisky finished as QB15 his first full year as a starter. Baker Mayfield was right behind him at QB16 with one less start. Kyler Murray has equal or better skills as a passer and dominates as a runner. With what he’s shown and how Arizona is building around him, he’ll be an impact player in 2019.

Player Profiles
What to Do With the Steelers Tight Ends in 2021
by Jennifer Eakins · May 17, 2021
Related Articles