Drafting 10th in a league with a larger amount of teams is beneficial, as there’s a decent drop off after the first 10 players or so, guaranteeing me an elite guy at the start, with another solid player in just eight picks. With 14 drafters vying for talent, I need to be on my game, paying close attention to what owners around me are doing when it comes to their roster construction along the way.

In this Perfect Draft article, I will walk through a perfect draft from the 10th slot in a 14-team Yahoo PPR league. Each pick was optimized using projections and value-based rankings from the 4for4 Draft Hero tool.

Barkley doesn’t fall to the 10-spot very often so I take advantage of his 271 potential PPR points and value-based draft (VBD) score of +105, which is the rookie’s value based on the worst starter at his position. As long as he has a smooth transition to the NFL and can remain healthy, Barkley is set up for a monster season in New York, taking on bell cow duties behind a hopefully bolstered offensive line.

He’s a clear RB1 in 2018 and I’m pleased to welcome the former Penn State back to my roster. Looking ahead to the second round, I could go a number of ways but will most likely aim for the highest possible points this early in the draft.

I said I’d go for the most possible points this round, but I changed my mind—something that's allowed and often encouraged in fantasy football strategy. Draft Hero suggests Davante Adams, but I choose Freeman based on the cliff that happens after his tier in the RB department. There's a good 20-point differential between the Falcons RB and the next set of backs when it comes to projected PPR points this season. With 18 picks until my next selection in the third round, I like my chances at WR value much better than who’d be left for me at the RB position.

Freeman ended 2015 as the RB1 overall in fantasy points, followed by RB6 and RB13 finishes in subsequent seasons. If healthy, he’s still in the conversation as a starting back and I like what he brings to Atlanta's backfield. In a 14-team league, he’s solid as my RB2 and I look ahead to what the next round will bring. 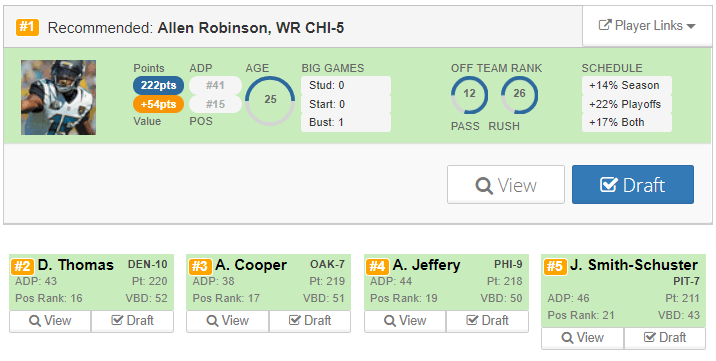 I was honestly split between Thomas and Allen Robinson here but chose the Broncos wideout based on a few factors. From 2012 to 2015, Thomas posted four straight Top-10 PPR finishes, and he finished as the WR15 and WR16, respectively, the next two seasons, with a lousy assortment of QBs throwing him the ball in both 2016 and 2017. With Case Keenum in town, Thomas should return to form and put up solid WR1 numbers for my fake football squad. Robinson should be fine, but coming off a torn ACL with a young QB knocks him down a peg for me.

It feels strange grabbing a guy like Thomas this early, as his ADP is more of a fourth-rounder, but I have to remind myself that there are 13 other teams drafting, so spots are skewed a bit.

Draft Hero suggests I take a WR here and perhaps I should, but I chose Collins based on which RBs will be there in the next few rounds. The Ravens lead back has a projected 216 PPR points with a VBD score of +50, with the next tier of RBs estimated to post point totals in the 180s and VBDs of +20. There are plenty of WRs with higher values forecasted to be on the board on my next turn, so I feel good about grabbing Collins to slot into my flex spot.

Collins emerged last season from Baltimore’s murky backfield. If he can remain healthy, he could find himself in the RB1 conversation at the end of the season—not too shabby for the third RB on my roster. I now turn my focus back to WR in the fifth round, unless of course, a gem at TE falls to me.

Continue reading to see how the rest of Jen's roster shakes out and to see which picks she deemed to be the best and worst values of the draft, as well as any final takeaways that may help you on draft day...