Drafting can be all about finding value. I’ve consistently pointed to the merits of considering opportunity cost and monitoring ADP value throughout the draft. The process and roster results will give you an optimal start to the season. But the fantasy season is a rollercoaster and outlooks for each team change as soon as Week 1 begins. It’s our job to capture as much of an edge as the season unfolds. A common strategy is to incorporate stacking into our draft process to find as much upside within our squads as possible.

Stacking tethers us to a team (or teams) and their season. Specifically, and ideally, the highest fantasy contributors on those teams. Best-ball drafts give us the most chances to incorporate this strategy. With larger rosters and multiple players at each position, we can measure the advantage as multiple approaches to the tactic being employed. Using FFPC data from 2019, I looked into the different ways to stack and the optimal approach for building winning rosters using the methodology.

Stacking isn’t a new concept. Fantasy managers have been pairing quarterbacks and their wide receivers or drafting multiple players on the same team for some time. The results look similar across drafts. Julio Jones paired with Matt Ryan. Aaron Rodgers drafted with Davante Adams. But the effectiveness of two players is difficult to measure when our rosters typically start nine. To get a gauge on the strategy, I laid out some questions to answer with the dataset.

Should we stack? Does it help?

How should we stack?

When should we stack?

Who should we stack?

Win rates from a large population reduce some of the noise induced by outlier performances. Even our favorite players (or combination of players) can only account for so many teams. A good strategy - an effective one - should exist outside of popularity. So, to start, I looked at filtering out rosters looking for any quantifiable difference in applying stacks.

A couple of takeaways to pull from here. First, even with these simple stacks, we can see the edge provided by the strategy. For both ‘QB-TE’ and ‘QB-WR’, the 2019 win rates increased to 8.8% and 8.7%, respectively. It’s not just that rates climbed, but the threshold they surpassed in the process. In any 12-team draft, our chances are the same as everyone else’s. Draft slot and strategy may tilt the odds in your favor, but let’s assume all things are equal. In that case, your chances of winning are 1-in-12 or 8.3%. Stacking pushes past that layer of randomness with a simple adjustment to our draft strategy. A one-year sample isn’t definitive but lends credence to the idea that the method gives us as much edge.

The second takeaway is that we should be stacking quarterbacks with pass catchers. In both cases, win rate increased when comparing rosters that incorporated a stack with a WR or TE than without. Logically, this makes sense. Quarterback production is largely tied to receivers and tight-ends due to the types of routes they run and their resultant aDOT. Despite our affinity to gravitate towards pass-catching running backs, their production largely doesn’t affect quarterbacks. Running backs with 50 or more targets had an aDOT of 1.1. Dalvin Cook’s aDOT in 2019 was actually *negative* 1.5. By contrast, wide receivers meeting the same target threshold had an 11.5 aDOT with tight ends slightly behind at 8.0. PPR scoring has heavily influenced how we look at the RB position, but, for stacking purposes, our focus should be to pass-catchers farther downfield to see any marginal benefit.

Stacking vs. Adhering to ADP

Our first intuition is to go for the popular stacking combinations. Stacks that involve players with generally higher ADPs either based on historical performances or current situations. But our previous discussion indicated that stacking was viable independent of the player’s draft cost. Essentially, if we’re employing the method then opportunity cost becomes less of a factor. I looked into it further. 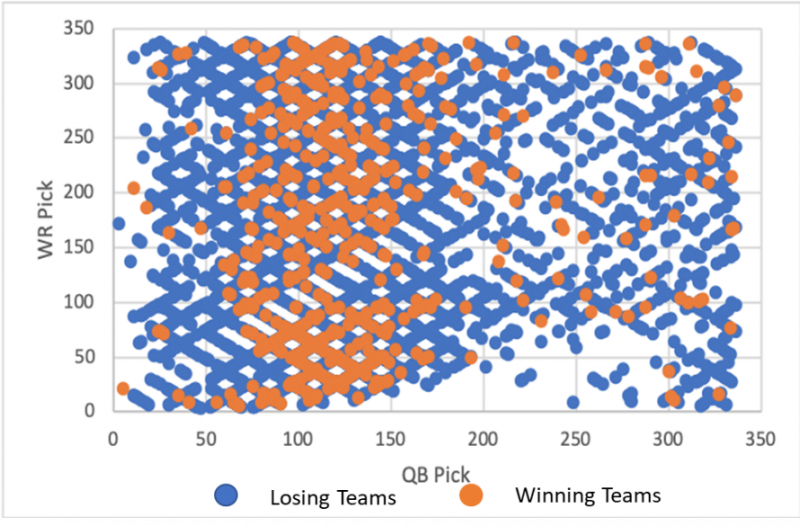 Admittedly, this is a busy chart. However, we can tease some takeaways from the collected data. We can start by looking at how fantasy managers approached the strategy from an opportunity cost standpoint.

The breakdown indicates that fantasy managers were significantly more likely to take their quarterback and complete their stack in the middle rounds of the draft. This is good! At least, from a structural standpoint, it’s good. I’ve noted the risk involved in drafting quarterbacks early. It’s good process to at least consider what you’re giving up when applying an aggressive strategy at the position. Stacking is typically highlighted by high-end examples, but the data points to something different. With a mid-round approach, drafters weren’t forced into a sacrificing capital to gain an edge. Applying this approach could have netted drafters the following stacks:

We can really see the advantage provided by mid-round stacking when combining our ADP bounds with the win rate data from 2019. Every player on this list finished in the Top 12 for win rate at their position. The earliest quarterback selection (Wilson) was at 100.5. Chris Godwin carried the highest wide receiver ADP at 51.7. These examples highlight the true advantage of the method as the combinations can be described as ‘natural’. Significant reaches in ADP aren’t required to gain a league-winning edge. However, it’s critical to understand if the seeming lack of aggression in using mid-round stacks was worthwhile.

Exactly what we needed to see. Drafters who used a stack with a mid-round quarterback had a 9.9% win rate. A significant edge on their league. As I previously noted, focusing on the core positions in the early rounds gives us the most optimal path to a winning roster. Being able to stack your quarterback with their receiver boosts your potential as you head into the season. So, after a look back at how fantasy managers fared in 2019, we turn our attention to the 2020 season and how we can properly apply what we’ve learned.

Draft Strategy
When to Draft a Quarterback in Your Fantasy League