When to Draft a Quarterback in Your Fantasy League

Evaluating and drafting quarterbacks for your fantasy team can be daunting. Their perceived value is at the intersection of their surrounding talent. Starting skill-position players, offensive linemen, and even head coaches affect our view of a quarterback and their potential. And that’s just one piece of the puzzle.

Another piece is when to draft them. ADP generally sets the market with personal preference (or ‘getting your guy’) slightly shifting value. But drafting a player at a 'onesie' position isn’t an easy decision. Opportunity cost should be constantly weighed against a player prior to acquiring them in a draft. With that in mind, I’ve laid out my process for attacking the quarterback position and who I’ll be targeting in drafts this season.

Let’s start with what’s important: opportunity cost. It’s not about when you’re drafting a player, but who you gave up drafting them. Even looking at 2019 on its own gives us an idea of how to approach this concept.

I used data from both redraft and best-ball leagues to visualize an intuitive trend. Higher ADP lends itself to increased fantasy production in the early rounds. It’s not an indictment on early-round QBs, but a concept that is worthy of consideration. Another is an understanding of what QB stats correlate year-to-year.

Big QB performances happen every season. The outliers and our ability to judge weekly matchups have sustained late-round and streaming strategies for nearly a decade. But the rise in cost the following season is inevitable. It forces us to question if the performances are repeatable. Or, stated another way, if the prior year’s performance influences the next. It’s here that understanding year-to-year correlation becomes important. 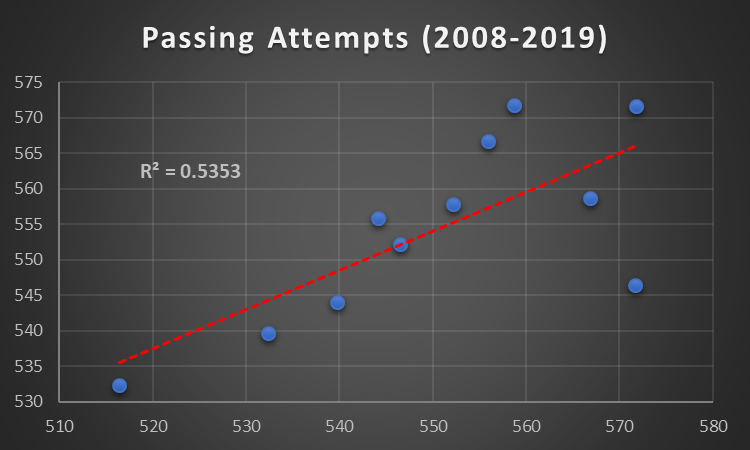 A significant correlation is what we want. Evidence suggesting that, even at the league level, the patterns can continue. It gives us reasonable ground to start on when projecting the next season. I completed similar analyses for multiple QB metrics for comparison.

Again, we visualize an intuitive concept: volume is stable while scoring is not. Touchdowns and touchdown rate had the weakest correlation and, subsequently, the highest coefficient of variation across the metrics measured. The results help me frame each quarterback’s season. It’s not just about their total points or final rank. It’s about how they accumulated their points. Dak Prescott accumulated 4,902 passing yards in 2019 (a career-high and 1,017 more than the previous season). Ryan Tannehill threw for touchdowns at a 7.7% rate (his prior best was 6.2%). A singular data point can’t describe a full season. But it helps us set expectations when looking at the big picture.

Opportunity cost, past performance, and current situation are all important factors. It’s how we balance them all throughout the draft that can help or hinder our squads. Now, let’s dig into the current market.

I mentioned streaming and the late-round quarterback strategy earlier. Both have been used for years and the results have been fruitful. Over the past three seasons, a Top-12 QB has had an ADP of 100 or greater 44.4% of the time. The QB1 has come from that same range twice in the past three seasons. Waiting has worked in the past, but the market has caught up. Last year, the median ADP for Top 12 QBs was 92.9. That value has shifted to 82.6 in 2020. Almost a full round on an entire group of quarterbacks. The shift should reinforce the idea of tiers or drafting based on structure.

In any case, I broke down each phase of the draft and highlighted some targets along the way. Draft slot or positional runs may force your hand, but we can isolate some optimal pathways to finding value at the QB position.

We talked about opportunity cost earlier. The task of balancing the QB you’d like to draft with the WR or RB you’re foregoing. Drafting a QB in this area comes at a significant cost. Instead of looking at prior season averages, let’s put some names to it.

Drafters have already identified their favorites or potential values at the core positions with the ‘Big Three’ at TE thrown in the mix. It’s in this range that the market dictates we draft the two best QBs coming out of 2019: Lamar Jackson and Patrick Mahomes. That’s a difficult ask when considering your roster from a structural perspective. 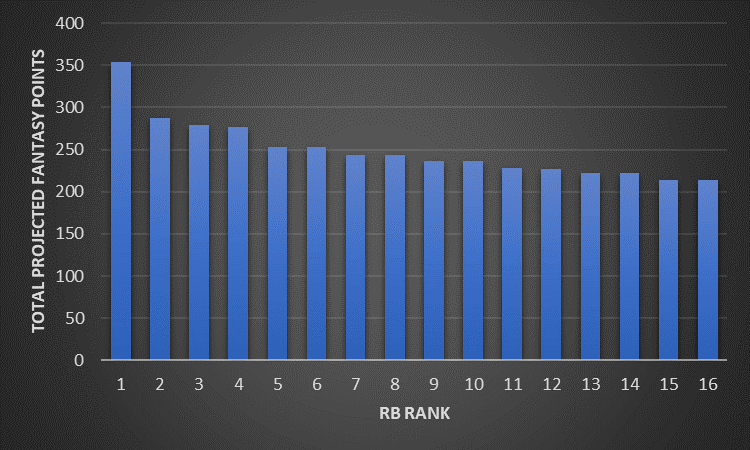 There are approximately 16 RBs with an ADP of 24 or less. Using 4for4’s projections, that initial range correlates to an 8.8 PPG drop from RB1 to RB16. An investment in a non-core position at this stage of the draft assumes a lot of risks. It requires a hit (or production above expectation) in the following rounds to account for the draft capital spent elsewhere. We spend the remainder of the draft chasing players to fill out our roster when we can acquire the necessary production ourselves in the early rounds.

Avoiding quarterbacks this early essentially means you’re missing out on Jackson and Mahomes. On the bright side, you’re leaving the first few rounds with an optimal build (e.g. 2RB/1WR, 1RB/1WR/1TE). If either is available in the fourth, draft them. At that point, their weekly outlook outweighs the opportunity cost to draft them making either a value. Otherwise, we look to the other quarterbacks typically available in Rounds 4 to 6.

Continue reading for a Middle and Late Round QB Strategy, Chris' preferred strategy for 2020, plus a chart of QB targets by round!