I knew a week like this was coming, but I didn’t know when it would happen. The Vegas lines should’ve been my first clue. We had four games with teams favored by a touchdown or more. I expected high-scoring affairs with big fantasy days from multiple players, but I came away disappointed.

Joe Mixon powered the Bengals' offense and kept the aerial attack in check. The Jets upset the Bills. Plus, Justin Fields decided to break Michael Vick’s single-game rushing record. Every game seemed to come down to the wire in an unimaginable way, leaving me with more questions than answers. But let’s glean what we can from the action and find some more streaming options for Week 10.

Justin Fields having a 41% roster rate made the week all the more difficult. He would’ve been my top player if not for the extra percentage. And admittedly, my confidence in every recommendation waned as the week progressed. Regardless, like every week, let’s see what I missed.

The Falcons activated Cordarrelle Patterson with the intent of easing him back into the lineup. They lied. And, to make matters worse, Patterson’s workload didn’t come at the expense of another running back. It was a four-way rushing committee, with Patterson banging his way in for two scores. Atlanta still ran 15 red-zone plays, but their added firepower took away more than expected. New England’s defense did something similar.

The Colts had nine series of three plays and didn't complete a third-down conversion attempt. I speculated the Patriots’ defense would give Mac Jones a favorable field position on their drives, and they did. Jones’s average start was at his 38-yard line. However, he only threw past the 10-yard mark seven times as Indianapolis imploded just like the Saints’ offensive line.

Just want to preface this by saying I DO NOT THINK THIS SACK SHOULD HAVE BEEN ROUGHING THE PASSER.

But Calais Campbell landed on Andy Dalton. Isn't that like sometimes called a penalty or something?

The defensive upgrades were too much for Dalton. In prime “Primetime Dalton” fashion, he took four sacks with a pick off of a tipped pass. New Orleans only had one series of more than 20 yards in the first half, as the Ravens ran over them for 188 yards. The game environment necessitated more passing, and some tightrope work down the sideline got him a touchdown. Luckily, we’ve got better options in Week 10.

San Francisco trading for Christian McCaffrey is working better than expected. Well, at least better than I anticipated. Since joining the 49ers, Jimmy Garoppolo has had an easier time piloting the offense. 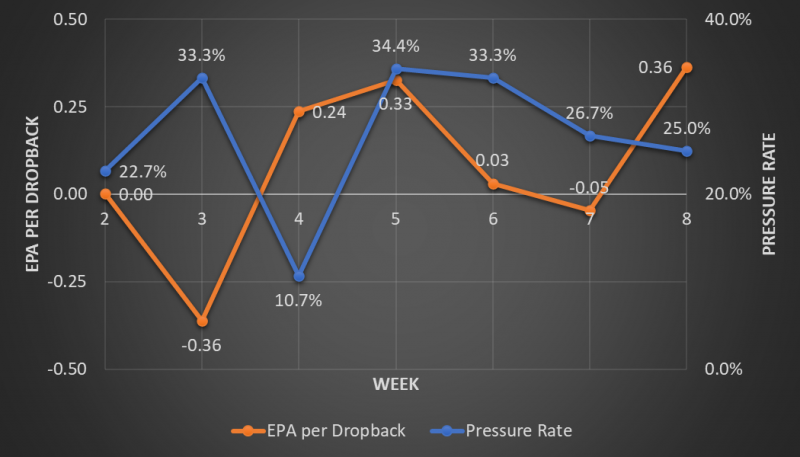 Of course, it’s a two-game sample. But let’s look at each of those games. Kansas City had a 32.3% pressure rate before facing San Francisco in Week 7. They blitzed on 31.0% of Garoppolo’s dropbacks but only got pressure on 26.7%. The Rams game was even more interesting.