Going into the 2022 season, there isn’t a passing offense that offers the combination of fantasy upside and draft day affordability that the Eagles do. Despite throwing for just 19 touchdowns in 2021, Jalen Hurts finished as fantasy’s QB9. He is the biggest winner this offseason after Philadelphia traded for A.J. Brown, giving them one of the best wide receiver duos in the league. After a spectacular—but somewhat under-the-radar—rookie campaign, DeVonta Smith is ready to take a year-two leap and help catapult the Eagles into the elite fantasy ranks.

Coming into the 2021 NFL Draft, there was plenty of discussion about Smith’s size and how that would translate to the pros but the Eagles confidently selected the former Heisman winner with the 10th overall pick. From there, Smith proved that he not only belonged in the NFL but he could excel.

One thing that wasn’t a concern for Smith coming out of college was his route-running ability and that skill set was on full display in his first year. Philadelphia used Smith primarily as a perimeter receiver and he dominated opposing cornerbacks, finishing above the 75th percentile against man, zone, and press coverages with an astounding 84th percentile finish against press, according to Matt Harmon's Reception Perception.

“It’s plain as day that Smith is already a great route runner and high-end separator. He gets open at every level and across a variety of coverages. That’s a trump card trait in the works.” 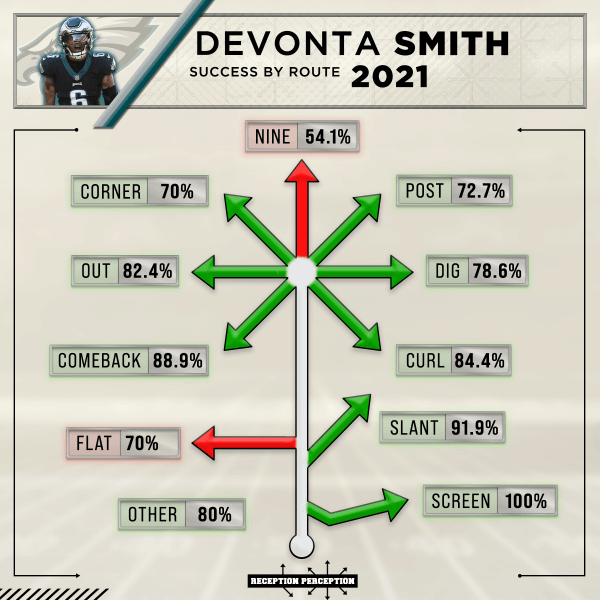 In addition to his route running, Smith posted elite volume and rate numbers, matched only by some of the best talents in recent history. With a target share of 22.8%, 8.8 yards per target, and 2.0 yards per route run (SportsInfoSolutions) in 2021, Smith became just the fourth rookie in the last five seasons to hit 20%/8.0/2.0. The others: Ja’Maar Chase, Justin Jefferson, and Terry McLaurin. Unfortunately for fantasy managers, that only translated into a WR29 season (half-PPR) but the Eagles’ passing game is trending up.

It’s easy to look at Philadelphia’s second-fewest 492 pass attempts from 2021 and say this offense can’t support multiple fantasy-relevant pass-catchers. What we care about, especially with a player as easily attainable in fantasy drafts as Smith, is the ceiling. Rather than looking at what the Eagles did in 2021, fantasy managers should be focused on what they want to do in 2022.

Prior to Hurts’ passing struggles in 2021, it was clear that Nick Sirianni and his staff wanted this to be a passing offense—through the first seven weeks of last season, Philadelphia ranked in the top 10 in neutral passing rate. The acquisition of Brown indicates the Eagles should see at least a moderate uptick in passing volume. That increase doesn’t have to be extraordinary for both Brown and Smith to have big fantasy seasons if they can command the kind of target shares they are used to.

Smith saw 23% of Philadelphia’s targets last year and Brown consistently paced for 25%+ in Tennessee. Given the potential as one of the best wide receiver duos in the league, it’s reasonable that the player that suffers the most from Brown’s arrival is Dallas Goedert, with the two receivers likely commanding well over 20% of targets. Historically, similar duos have been great buys in fantasy—since 2013, 17 wide receiver teammates have seen individual target shares of at least 22% and in 12 of those instances, both players finished as top-24 fantasy wide receivers (half-PPR).

Even if Hurts doesn’t make the skill leap that Josh Allen made in 2020, this pass-catching corps can propel Hurts to a once-in-a-career touchdown rate, as we saw from Lamar Jackson in 2019. One of the best things this passing game has going for it is the deep ball—last season the Eagles’ 21.7% deep-ball rate ranked second in the league behind only the Seahawks (a team that produced two top-24 fantasy wide receivers on volume similar to Philadelphia’s). The deep ball was a major reason I put an overall QB1 season in Josh Allen’s range of outcomes two years ago and with Smith and Brown on the field together, it can help Hurts catch lightning in a bottle in 2022.

Rather than trying to perfectly predict player outcomes, it can be beneficial to target offenses with massive upside and look for opportunities to buy low. DeVonta Smith presents one of those opportunities. From both a statistical and technical perspective, Smith profiles as an elite wide receiver and he is now part of one of the best pass-catching duos in the league on a team trending towards more passes in 2022.

In an offense that favors the deep ball, Hurts could support two top-24 fantasy wide receivers even without a huge jump in skill. As of this writing, the ADP gap between Brown and Smith is too wide with Brown coming off the board in Underdog drafts as the WR11 (25th overall) while Smith is barely being drafted as a fantasy starter in 3-WR leagues (WR35, 70th). Smith is a bet on talent in a potentially elite offense that the public still has questions about.