As we work our way into redraft league frenzy season, when the bulk of your friends and family drafts take place, analyzing ADP from week to week during the preseason is helpful to gather an overall impression of where players are being selected. Drafters in Underdog leagues tend to be sharper than your average fantasy football participant, so you may find players will slip a bit further in some leagues than others.

In other words, ADP data is very useful but is not everything, so don’t ride or die with it.

In this piece, I’ll look at some of the biggest risers and fallers from the first week of the preseason, comparing their ADP from August 8th to August 15th with an emphasis on how to approach them moving forward. A player’s ADP can change for a myriad of reasons, and diving into the cause of that movement can certainly help come draft time.

Note: The number in parenthesis represents their overall +/- ADP jump according to 4for4's Underdog ADP Tool. 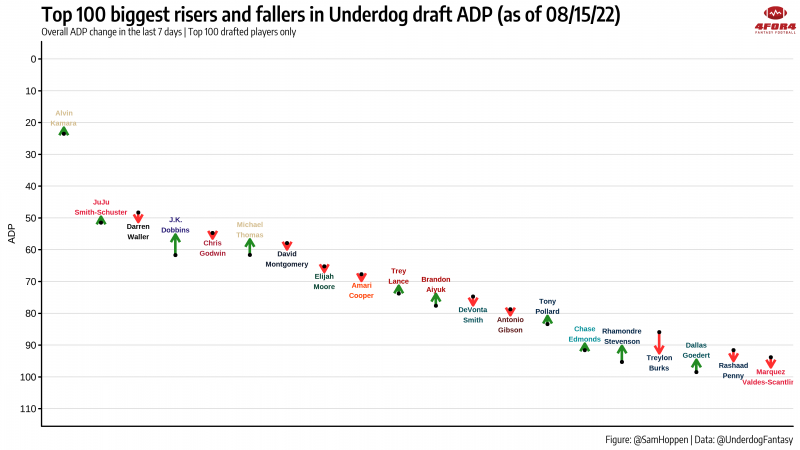 The Baltimore RB came off the active/PUP list on August 8th and appears to be on track for Week 1. This news gave drafters more confidence in clicking that button for J.K. Dobbins, and he rose from a sixth-rounder into the fifth. He’s being drafted as the RB20 and has the potential to crack the top 15 in the Ravens' run-heavy offense.

Rumors began to swirl surrounding a trade involving Damien Harris, which caused a spike in Rhamondre Stevenson’s draft stock. His ADP was also on the rise prior due to a solid showing at camp. It is the Patriots backfield, however, and with James White announcing his retirement, Pierre Strong Jr. is also getting some hype as his potential pass-catching replacement. Proceed with caution as usual with New England RBs, but Stevenson is now an eighth-round pick as RB30 and currently sits as RB25 in 4for4’s half-PPR rankings, so there is some value still there.

After not playing since December of 2020, any on-field action without braces or wrapping on his ankle is making drafters more apt to select Michael Thomas earlier and earlier in 2022. He’s been slowly creeping up draft boards since camp started and spiked nearly five spots into the fifth round over the last week. On a team with limited pass-catching options, Thomas could outperform even his current draft spot as WR29 but also comes with legitimate risk.

The dip in ADP for Treylon Burks is most likely due to a preseason game full of red flags. The rookie didn’t see the field until the third series, even with Robert Woods and Nick Westbrook-Ikhine on the sidelines for the contest, and played the entire rest of the game, which doesn’t bode well for any starter status. Burks’ only contribution came on one rush for four yards, also not great considering how long he was on the field. It’s still early, but even at his eighth-round ADP, he’s still a big gamble to return value.

First, Chris Carson retired, which was great news for both Rashaad Penny and rookie Ken Walker, but then Pete Carroll announced that Penny was experiencing some groin tightness, which most likely triggered some PTSD for fantasy managers across the globe. The 26-year-old has only played in 37-of-65 possible regular-season games since entering the league in 2018, suffering a slew of injuries ranging from a hamstring strain to an ACL tear. Penny is still ahead of Walker on the depth chart and in ADP (95, RB32), but the rookie is not too far behind, coming off boards as RB35 at spot 102. 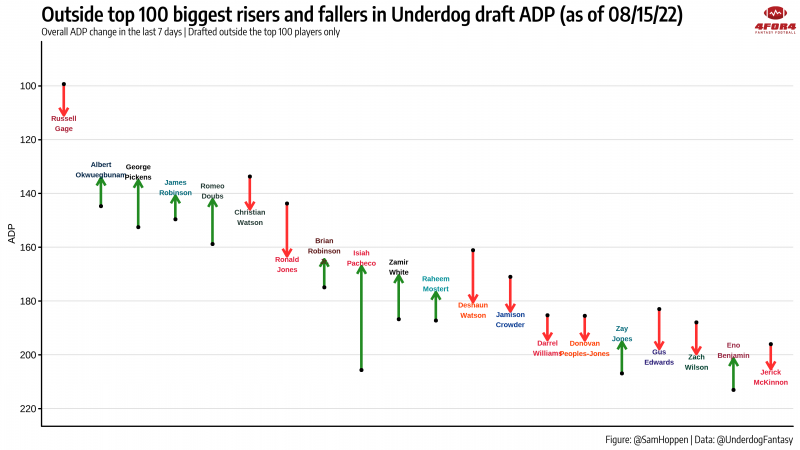 It’s tough to tell where this Isiah Pacheco hype bus will stop in terms of ADP, but the rookie RB spiked 38.6 draft spots in just seven days. Pacheco didn’t do anything too spectacular in the Chiefs' first preseason contest, rushing twice for six yards with a catch for another five, but he did get some work on the opening drive with Patrick Mahomes at QB which is telling. The Rutgers product looks to be in line for an immediate role in Kansas City and drafters are always chasing work on good offenses. Pacheco is now a 14th-round selection but has probably climbed draft boards while I’m typing this article.

It appears that the rest of the fantasy community has caught up to this UGA alum in figuring out that George Pickens has immense talent. He was injured for most of last season and had some off-field concerns that slid him down NFL draft boards, but landed with the Steelers and is showcasing what he can do early in the preseason. Pickens rose 17.5 spots in the course of a week, and could climb even more as the preseason rolls on. The QB situation is less than ideal and that’s not going to change, but as the WR61 in the 12th round, Pickens’ upside makes him still a value even with the ADP spike.

Another rookie who was underhyped during the spring, Romeo Doubs has been a stand-out at training camp and has been climbing the draft ranks at a rapid pace since July. QB Aaron Rodgers appears to have confidence in the 22-year-old, which is enough for managers to buy in. He’s still inexpensive as a 13th-round selection and has plenty of potential to outperform his current WR68 spot.

It seems that Ronald Jones is not only getting leapfrogged by rookie Isiah Pacheco on the RB depth chart, but he’s even at risk of not making the 53-man roster, according to Nate Taylor of The Athletic. Drafters are taking notice and the former Buc’s stock has plummeted nearly two-full rounds over the last week. Jones is now a 14th-round selection as RB51 if you still believe or want a really inexpensive piece of this offense in the event he turns things around during the remaining preseason campaign.

Not only is his status this season still in question, but Deshaun Watson was pretty awful in his first NFL action since 2020. On the field for the entire first quarter, Watson completed only one pass of five attempts for just seven yards. To make things worse, his center Nick Harris is likely out for the 2022 season with a knee injury. The Clevland QB has fallen to the late 15th-round and is now the 23rd QB off draft boards.

This ADP slide is a combination of news that Gus Edwards is doubtful for Week 1 after recovering from a knee injury, while Dobbins was taken off the active/PUP list and is a go to start the season. Fantasy managers are drafting Dobbins with a bit more swagger and fading the Gus Bus all the way down to the 17th round as RB60. The Ravens are perenially run-heavy and will most likely go with Dobbins and either Mike Davis or rookie Tyler Badie to start the season, but I wouldn't count Edwards out of this backfield completely. He’s not someone to target in redraft leagues, but at his cheap ADP, he’s still viable in best ball formats.