Week 3’s winning lineups from the biggest contests on FanDuel and DraftKings can be used to tease out lineup-building strategies and offer clues on how you could have landed on a similar team. Reviewing your hits and misses each week is imperative if you want to be a profitable DFS player but examining winning lineups is also a useful exercise in cultivating a winning approach. 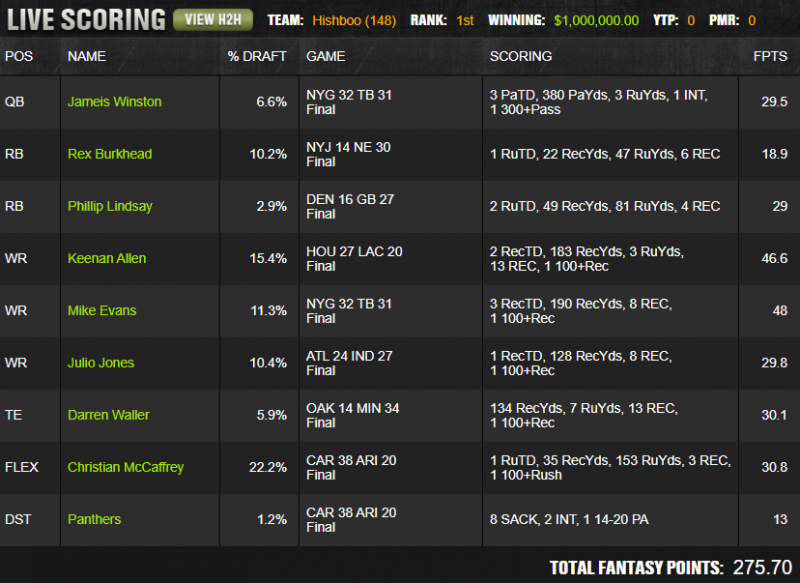 With the dominance of top-tier running backs over the past couple of years, Hishboo built a winning Millionaire lineup that reminded us top-tier wide receivers have as much upside as running backs. This lineup used three receivers priced in the top 12 at their position, all with ownership above 10%. With so many people leaning on expensive running backs, it makes sense to have lineups with contrarian builds. This doesn’t mean to go off the rails across the board—Hishboo max-entered the Millionaire and his four highest-owned players were the chalk cheap wide receiver, Nelson Agholor, as well as three high- to mid-priced running backs, namely Austin Ekeler, Chris Carson and Christian McCaffrey. Remember when reviewing lineups, DraftKings allows you to download every lineup in a given tournament, which lets you study the trends of winning players beyond just their top lineup.

With relatively flat ownership at quarterback and tight end, Jameis Winston’s and Darren Waller’s single-digit ownership isn’t really all that low relative to the field—only one quarterback and three tight ends commanded ownership levels above 10%. Phillip Lindsay and the Panthers defense are the players that really separated Hishboo from the field.

Lindsay didn’t pop on any projection model or in any volume report but the keen observer might have noticed he was one of just 13 backs with at least 15 touches in the first two games of the season. While Denver was a big road dog, that kind of touch volume is enough to swing an entire week when the player is getting virtually no attention.

The Panthers-Cardinals game was a popular stack on the offensive side of the ball but it should be common knowledge by now that defenses don’t need to be in low-scoring affairs to be fantasy relevant. Targeting an offense that throws a lot—Arizona was throwing at the third-highest rate in neutral game script going into the week—is ideal and it can be especially fruitful when that team has a bad offensive line or a quarterback who holds the ball too long. It’s an added bonus when that defense is a leverage play off of two popular offenses. 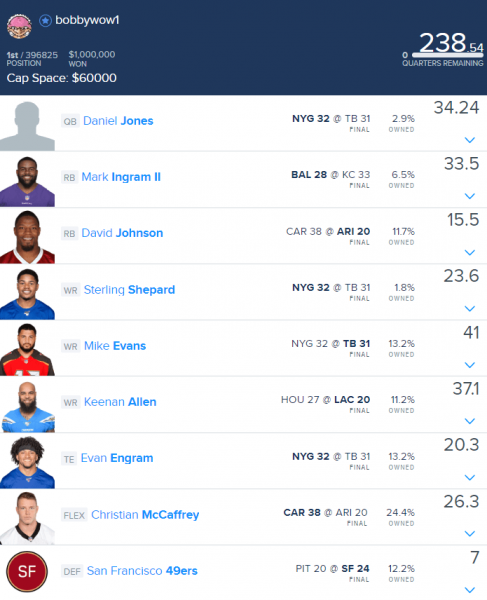 This lineup was the epitome of leveraging public perception with fear of the unknown. By Sunday, the Buccaneers had become a popular offense to stack against a putrid New York Giants secondary, but we know opposing passing games are highly correlated and there’s an argument to be made Tampa Bay was actually the worse defense in this game. With Sterling Shepard returning from a Week 1 concussion, it made sense to expect a concentrated passing attack—an injury to Saquon Barkley only helped Sterling Shepard’s and Evan Engram’s volume. New York had shown little in the first two weeks with Eli Manning under center and it was easy to write this offense off with a rookie most draft pundits didn’t like making his first start. If you were someone who was heavy on the Bucs, though, it made sense to have a couple of shares on the other side, especially since the vast majority of the public ignored the great matchup.

With so much data available to DFS owners, it can be hard to find an edge in a spreadsheet, especially in tournaments. In large-field, top-heavy payout contests, we aren’t seeking point maximization, but win maximization. This can mean relying on metrics much less than we are used to, especially when implementing tactics such as game theory and public perception. When a player like Daniel Jones or Kyle Allen steps in, it’s virtually impossible to draw any strong conclusions about their team’s expectation with no data to fall back on for that player. That unknown, though, is exactly what we are seeking when trying to differentiate ourselves from the field. A large percentage of the time, rostering a Daniel Jones isn’t going to work but it’s the black swan events we seek.

This is why we take a barbell approach to both game selection and lineup building as much as possible. In other words, we are playing a lot of reliable games (cash) to offer a steady return with a few high variance games (GPPs), waiting for a big spike. For our lineups, the vast majority of our player pool should be our best values or high-volume plays that are easy to project with a few Daniel Jones-types sprinkled in. The one thing we have working in our favor is that a barbell approach almost comes to you—if you played 100 lineups and had four with Daniel Jones and two of those included Sterling Shepard, you were already overweight on the field. Over the course of a season, you might only need to be right on one of these black swan events once to give you an unbelievable return on your money, assuming you are managing your bankroll responsibly.