Will Chris Olave be Fantasy Relevant as the Saints WR2?

As the third wide receiver off the board in the 2022 NFL Draft, Chris Olave was selected by the Saints at pick No. 11 after a trade-up with Washingon. As part of a new-look offense without Sean Payton calling the shots, Olave and Michael Thomas have the potential to be a lethal pass-catching duo, but the rookie's fantasy upside could be limited by the inconsistency of QB Jameis Winston.

At 6’0’, 187 pounds, Olave finished his Buckeye career as the all-time touchdown leader (35), with an insane 20% of his collegiate touches finding the end zone - the highest in this year’s draft class.

Considered the best route runner and separator of the rookie wideouts, Olave flies down the field with technical precision and accuracy. According to Matt Harmon’s Reception Perception, scores of 78% success rate in man and 83.1% in zone coverage make him one of the top prospects charted in Reception Perception history.

His charts below indicate just how varied and balanced Olave’s route-running has been thus far, with his only low numbers on screens and flats. 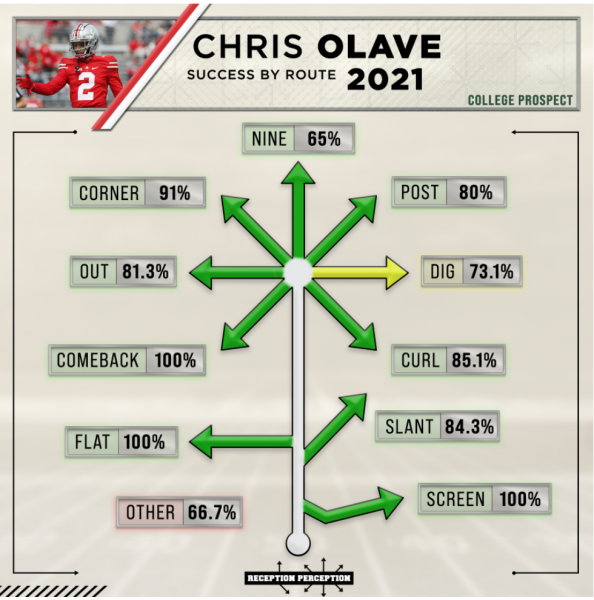 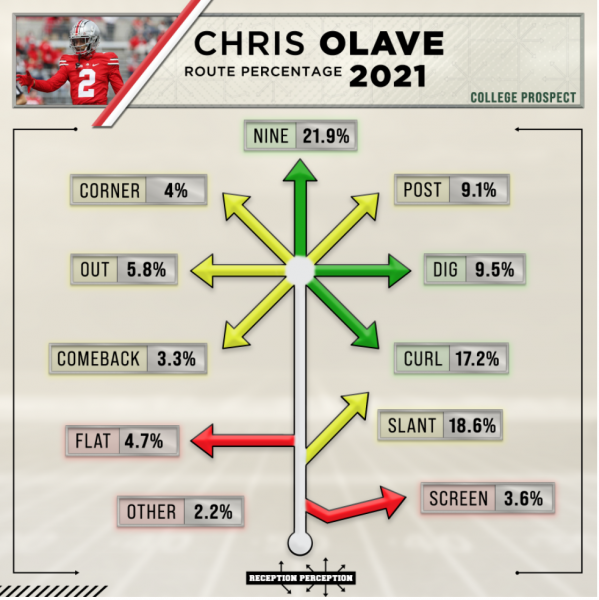 The Saints with Chris Olave

New Orleans has been looking for their WR2 for what seems like a decade, with a carousel of players like Tre’Quan Smith, Emmanuel Sanders, Ted Ginn, and Brandin Cooks rotating in and out of that spot. They may have found their guy in Olave, but what will 2022 look like for the Saints passing game?

According to our Available Air Yards & Targets Tracker, New Orleans has just 13.5% of their targets available from last season which is the fifth-lowest in the league, but the WR room isn’t exactly chock full of competition.

Michael Thomas is a monster when healthy but is known for dominating on short, slant routes which aren’t Olave’s (or Jameis Winston’s) forte. Tre’Quan Smith hasn’t seen the volume or been consistent enough of a producer to reach true fantasy relevancy, as he hasn’t eclipsed 50 targets in any season with the Saints, or bested 1.29 yards per route run in his four-year career. Marquez Callaway was a training camp darling last season who ended as WR51 in half-PPR points per contest but only ended up there due to attrition. Then there’s Deonte Harty (not a typo, he changed his name in January), who’s efficient enough in spots, but at 5’6” just doesn’t have the build to be their true WR2.

The Saints didn’t move up in the draft to not feature Olave from the start in this offense. He should be their second or third passing option behind Thomas and Alvin Kamara, and his route-running and deep-ball prowess line up well with quarterback Winston’s skill set, if they let him toss it downfield more in 2022 than they did in the first half of last year when he was the signal caller.

Player Profiles
Velus Jones Has No Fantasy Floor In Chicago