Two fantasy WR2s with very different offensive situations are being selected in the fourth round of 2022 fantasy football drafts. Mike Randle makes the case for Diontae Johnson, while Brendan Darr argues in favor of Marquise Brown.

The Case for Diontae Johnson

Mike: Marquise Brown had a nice season for the Ravens in 2021, but to paraphrase the late Lloyd Bentsen, he’s no Diontae Johnson.

Brown has now moved to Arizona and is playing with a superior quarterback in Kyler Murray. However, Johnson may actually see improved quarterback play without the now-retired Ben Roethlisberger. The former Steelers signal-caller ranked just 24th among all quarterbacks in True Completion Percentage (68.7%) while finishing an abysmal 29th in Deep Ball Completion Percentage (PlayerProfiler). In short, Roethlisberger just wasn’t very good.

The transition to Mitchell Trubisky at quarterback could actually help Johnson. Trubisky has averaged below 7.0 yards per attempt in four of his five NFL seasons, including 6.1 yards per attempt in a 2020 season where he threw a career-high 516 pass attempts. Per PlayerProfiler, his deep-ball completion percentage has consistently ranked outside the Top 20 quarterbacks, indicating he prefers to attack in the short to intermediate area of the field. This is where Diontae Johnson thrives.

The passing attack may not change that much under Trubisky, and Johnson has already demonstrated a superior production profile in that same system last year with Roethlisberger.

Targets are earned, which Johnson has been doing at an elite level over the past two seasons. Johnson has been targeted the third-most times since 2020, more than either Justin Jefferson or Stefon Diggs (StatMuse). 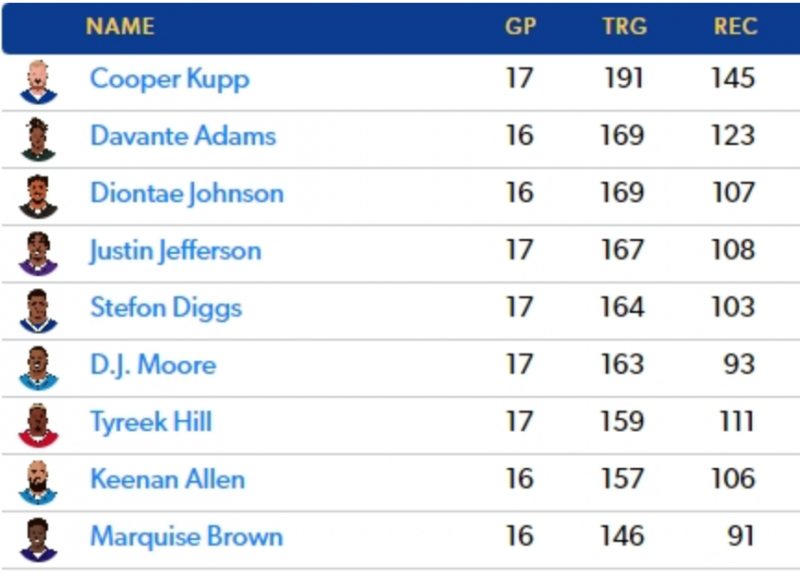 Johnson wins by getting open, something he ranks among the NFL’s elite wide receivers. He ranked 10th-best in target separation in 2021, compared to Brown’s mediocre ranking of 26th overall. Despite Brown’s superior 4.32 speed, he only ranked 20th in yards after catch. This is the very definition of a “feast or famine” wide receiver; the opposite of the volume-vacuum Johnson.

At 5-foot-9, 166 lbs, Brown lacks the size of a true WR1. He needs volume, which certainly won’t come when DeAndre Hopkins returns after a six-game suspension. Throw in the off-season criminal speeding arrest and a change of teams, and Brown’s range of outcomes is substantially greater than Johnson's.

The target competition argument also favors Johnson. Not only does Brown have to contend with the return of Hopkins, but also a superior pass-catching tight end in Zach Ertz. From Weeks 11-18, Ertz ranked third among all tight ends in targets (61) and second in receptions (42). How can Brown have a better fantasy season than Johnson when he is the third receiving option on his own team?

For redraft leagues, it’s very different. You need to plan each week by setting a lineup. Trusting your top wide receivers is critical to earning as many weekly victories as possible to make the playoffs. Over the past two seasons, there is no comparison between the consistency of Johnson and Brown.

Brown’s volatility is better served for Best Ball formats. His current UnderdogFantasy ADP of WR18 is still three spots higher from his end-of-year ranking in Baltimore, where he saw the seventh-most targets (145) of any wide receiver. While Kyler Murray is a more accurate quarterback than Lamar Jackson, Brown needs consistent targets to limit his weekly volatility. His place on this Arizona roster will not improve that weekly variance.

That is a clear advantage for Johnson, especially with the Cardinals having a poorly-placed Week 13 bye week. In the most important time of the fantasy season, why choose the WR2 with a tougher schedule over a dominant WR1 with a much-easier schedule?

Johnson has Brown beat in every major fantasy area besides quarterback talent. However, with Johnson’s success with Roethlisberger last year, superior target share, less competition, and better late-season schedule, I’m taking Johnson over the Cardinals' newly-acquired speedster every time. Brendan is a great analyst, but he’s backing the wrong horse in this race.

The Case for Marquise Brown

Brendan: This argument may have been a bit tougher a year ago, but Marquise Brown, even at cost, over Diontae Johnson is still the right play. Marquise Brown gets the benefit of a better offensive system, better quarterback, and less competition -- especially for the first six weeks of the 2022 season.

If only this debate series could be so easy.

Brown checks in with an ADP of 40.4 (WR18) while Johnson is half a round later at 47 (WR23). And this is how each team stacks up on available targets and air yards:

As you can see both teams have roughly the same number of targets to replace and a similar number of air yards to replace. What the table doesn’t take into account are the first six weeks the Cardinals will be without WR DeAndre Hopkins (ADP 74, WR36) and his 64 targets in just 10 games. Both situations are mired by a lot of uncertainty, so looking at where it can go wrong is more instructive.

There is obviously some risk here with Brown. He’s moving from an offense that had fewer dropbacks in Arizona (705) than his former team Baltimore (745) had, and even fewer than Pittsburgh (754). That’s not a major determining factor, but it does speak to issues fantasy managers have had with Cardinals HC Kliff Kingsbury and his more conservative approach than we were expecting coming from Texas Tech. While Brown will operate as Arizona’s WR1 for the first six weeks, he’ll be relegated to more of a field-stretching WR2 role after that. One stat that doesn’t help my case is yards per route run per PFF - Brown finished 50th out of 94 qualifiers in 2021 with 1.61 Y/RR (Johnson finished 27th with 1.83).

Johnson still has to deal with one of the worst quarterback rooms in the league with either Mitch Trubisky or Kenny Pickett under center. Combine that with a questionable at best offensive line and a team that might go more-run heavy to take the pressure off the quarterbacks and it is tough to project another 169-target season for Johnson. Add to that, while the Steelers subtracted Juju Smith-Schuster and James Washington from the offense, they still have Chase Claypool, an ascending tight end in Pat Friermuth, and also added George Pickens in the second round and Calvin Austin in the fourth round.

Between his college connection with Murray and the improved deep ball accuracy he should see this year, Brown is in for a big year. He already commanded a 15.8% target rate and has shown the ability to be the top wide receiver in an offense. Now he gets six weeks to prove it and continue to earn a sizable target share after DeAndre Hopkins returns.

Admittedly, a lot of the numbers will point to Johnson based on recent history and I’m not against drafting him. However, with the upgrade in the passing game combined with a quarterback that can better take advantage of him, Brown would be the pick when I’m on the clock.