Solving a crossword puzzle is the perfect balance of just relaxing enough and just mentally stimulating enough for me to really enjoy that as a wind-down activity most days. Some days I want an activity that’s a little more intellectually challenging, so I might take on sudoku or a jigsaw puzzle instead. Then there are the days where I want to just relax and let my mind wander with something easy; those are paint-by-numbers days.

Receiving the first pick in your ESPN fantasy football drafts in 2021 is a paint-by-numbers opus magnum, where you could treat the watercolors as fingerpaints and still find it hard to mess it up for yourself.

That said, just because you know how to nail the first overall pick doesn’t mean Rounds 2 through 16 are an absolute breeze. By having a star running back like Christian McCaffrey fall into your lap in a PPR league, you’ll likely end up going with an Anchor RB (one RB early, then Zero-RB lite the rest of the way) strategy. In a 12-team league, you don’t want to lock yourself into a strategy like Robust or Zero RB too early and get caught on a positional run while you twiddle your thumbs and wait.

The name of the game when drafting on the turn is balance, so let’s look at what a well-composed roster out of the 1-spot looks like in your 12-team ESPN PPR league. Each pick was optimized using projections and value-based rankings from the 4for4 Draft Hero tool. 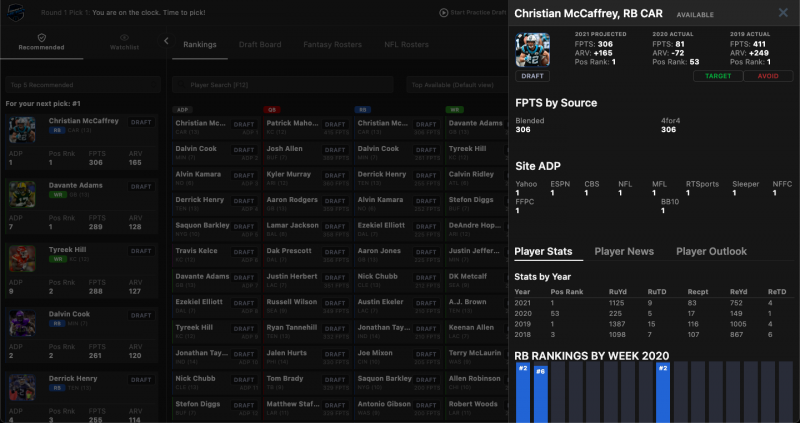 Like I said, the first pick in the draft is the easiest slot to figure out – in Round 1, at the very least. There, running back Christian McCaffrey of the Carolina Panthers is the locked-in choice.

Sure, CMC is coming off an injury-riddled season in 2020, but these were the first missed games of his career and none of the ailments (high-ankle sprain, shoulder/AC joint sprain, thigh/glute strain) were related at all. He doesn’t even have an injury history from college, where he missed just one game in 2016 due to an “inguinal hip pull” or groin strain. These nicks and dings are unfortunately built into the running back position. McCaffrey will likely miss a game here and there going forward, but so will every great running back; it’s what they do on the field that decides if they’re worth the 1.01 spot.

Since 2018, McCaffrey’s average 16-game season has seen him generate 2,163 total yards from scrimmage and 17 total touchdowns on 258 rushing attempts and 110 receptions (130 targets). It’s hard to remember that he wasn’t the sole backfield engine in his rookie 2017 season, but even including that year, he hasn’t seen a full season with fewer than 80 receptions and 110 targets. His floor in PPR leagues is so high that you just can’t afford to get cute by fading him at the 1.01.