Drafting out of the 11th spot in 2021 could go many directions, all depending on what happens in front of you while you patiently await the most important decision of your summer. The first tier of running backs, a tight end and a couple of wide receivers are typically going to go before your chance to draft, so it’s good to have a few targets at your ready. Luckily at the back end of the draft, you can immediately create a core for your team, a luxury that is not afforded to those with the first handful of picks.

This article will walk through a perfect draft with the 11th pick in a 12-team Yahoo! half-PPR league. Each pick was optimized using projections and value-based rankings from the 4for4 Draft Hero tool. 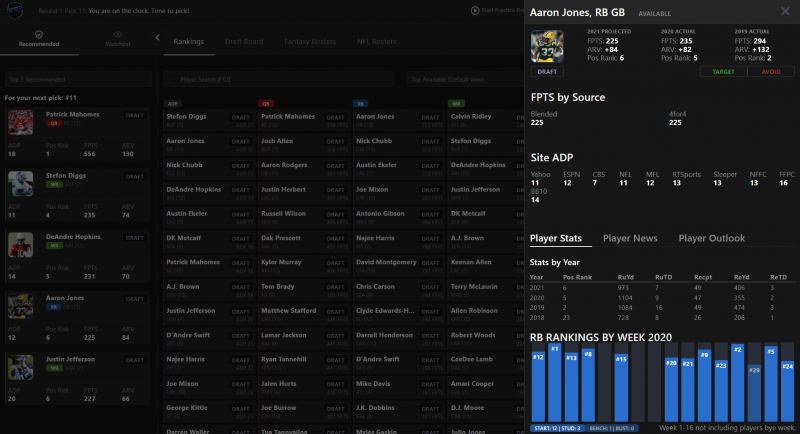 I'm perfectly content with landing Aaron Jones here, as I believe he is the end of a tier of running backs who could conceivably finish as a top-three option at the position. Jamaal Williams has left town, and even though A.J. Dillon remains on the Packers roster, I believe he could take some rushing work from Jones, leaving even more passing work for our first-round selection.

By going Jones I’m putting the onus on the 12-spot to select what wide receiver(s) they think will have the most potential fantasy production while I can simply select the leftover, as I see them all in the same tier.

Now that I have an anchor running back on my team, it gives me a few routes to go from here on, including attacking the position even further in the coming rounds or focusing my attention on wide receivers and/or a top echelon tight end.

Every round, Draft Hero recommends the top available suggestion along with four alternatives, as shown at the top of this section. Throughout the rest of the article, I will note those suggestions as well as my top alternative to the player I actually selected.