Josh Allen has the Tools for Fantasy Relevance in 2019

After being drafted seventh overall in the first round of the 2018 NFL draft, Buffalo Bills quarterback Josh Allen had an…interesting season. He showed everyone that he wasn’t afraid to sling it all over the field nor was he afraid of breaking the pocket. I don’t necessarily think Allen will be an above-average NFL quarterback, but that’s another debate. I do however believe that Allen has the tools to become a proficient fantasy quarterback.

Josh Allen is a Gunslinger

As I mentioned earlier, we like quarterbacks who take shots downfield. The best way to quantify this is by using the statistic, Air Yards. Air Yards are the exact distance the ball travels in the air from quarterback to the wide receiver. This gives us an idea for each quarterback’s risk tolerance. Those with low Air Yardage totals are generally low-risk passers while high-risk passers have high Air Yards.

In 2018, Allen averaged 10.99 Air Yards per pass. It just so happens that this was tops in the NFL, higher than quarterbacks such as Patrick Mahomes and Aaron Rodgers. Allen also threw it deep (passes that traveled more than 15 yards in the air) on 28% of his passes, which was also the highest rate in the NFL. Below is a violin chart comparing Allen’s Air Yards distribution to the league average. The wider the violin means the more that occurrence happened. The clear box is a boxplot—the box represents the middle 50% of the data or a rough average. The line inside the box is the median of all data points.

Below are Allen’s completion percentages compared to the league average for both deep and short passes to the left, middle, and right sides of the field. As you can see, Allen struggled in virtually every segment of the football field compared to the league average. Quarterbacks generally tend to thrive over the middle throwing seam routes to wide receivers and tight ends. If Allen can just complete a small percentage more of those downfield passes, that would have a large impact on his passing yardage totals.

While Allen may not have had an elite receiving core in Zay Jones and Robert Foster, I would hypothesize that the reason for his low completion percentage was due to inaccurate passes. To further evaluate Allen’s accuracy against the distance of the field, below shows his completion percentages for certain pass lengths compared to other AFC East quarterbacks. The black line represents the league average.

Clearly, Allen struggled mightily in passes between 10 and 15 yards, as well as passes in the 30-40 yard bracket. Even though he takes so many attempts downfield, he struggled to complete these passes. Also, Ryan Fitzpatrick’s 2018 was ridiculous.

Allen was also a rookie in 2018 and played behind a pedestrian pass-blocking unit. The Bills quarterback was hit on 19% of his dropbacks which was the 10th-highest rate in the NFL. I’m sure that some of those hits were caused by Allen holding the ball too long and inefficiently scanning the field. However, the Bills offensive line as a whole was a very poor unit in 2018 who certainly didn’t help Allen.

He Can Scramble Too

Not only did Allen put up big Air Yard numbers in 2018, but he also liked to run the ball. In games he started, Allen averaged 7.7 rushes per game. This was the second-highest rate in the league, even higher than known mobile quarterbacks Cam Newton and Marcus Mariota. Allen also averaged 55 rushing yards per game and eclipsed 94 rushing yards in four games. Extrapolate those rates out 16 games, that’s 123 carries and 880 yards. While those rates seem unsustainable, even a slight regression leaves enough carries for fantasy relevance.

Below are Allen’s yards-per-carry distributions. Clearly, he averaged higher yardage gains compared to average rushes since, after all, he is a quarterback. Quarterbacks usually scramble and break the play while the defense isn’t prepared for a runner. Regardless, these above-average gains shouldn’t go unnoticed. 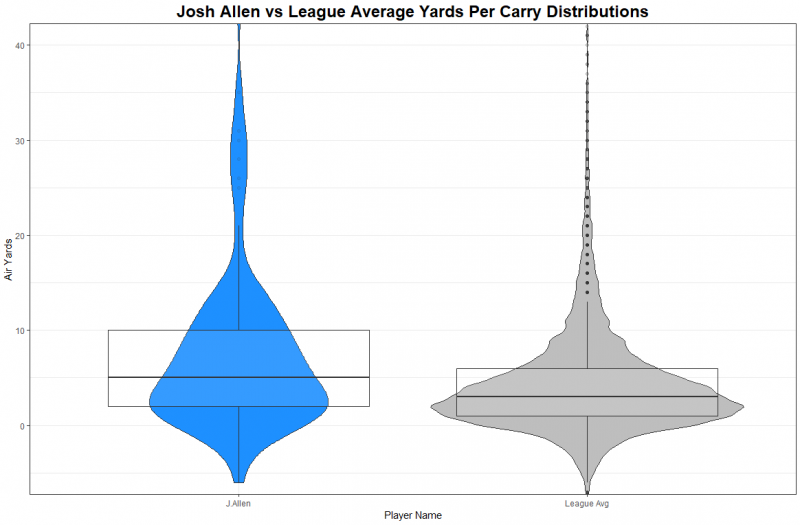 You should take a flier on Josh Allen in 2019. He has the makings of a solid fantasy quarterback as long as he can just connect on some more of his deep passes. One would hypothesize this would happen as his accuracy improves in year two. The Bills also added noted down the field speedster John Brown whose bread and butter is catching deep passes. To highlight that point, 46% of Brown's targets from Flacco were deep targets in 2018.

Even if Allen doesn’t improve greatly as a passer, he has those rushes as a nice base for fantasy points. Quarterbacks being able to rush adds another element to their fantasy performance. Excluding Allen, the top three quarterbacks in rushes per game were also all top nine quarterbacks on a fantasy point per game basis in 2018. Rushes per game is also statistically significant with fantasy points per game with a p-value less than .05 meaning that the two categories have a statistical relationship. The combination of Allen's running and new teammate in John Brown definitely should propel him to fantasy relevance in 2019. I’m not saying Josh Allen should be drafted as a top-10 quarterback, but I wouldn’t be surprised if he more than outplays his current ADP of QB19 in 2019.

All charting data used was generated from the nflscrapR package.

Player Profiles
DeVonta Smith: Philly's WR1 but is it Enough for Fantasy?
by Jennifer Eakins · Jun 14, 2021