Heading into the 2018 season, the first dilemma 1.04 owners face is whether to select the last remaining elite volume running back from Todd Gurley, LeVeon Bell, David Johnson, and Ezekiel Elliott or take Antonio Brown, who has finished as the overall WR1 in four consecutive seasons and second the year before that. Gurley and Bell are likely off the board. David Johnson has 2,000-total-yard upside and he also has an overall RB1 season to his name. Then there’s Ezekiel Elliott, who may have the highest touch upside of any in the bunch this season, with the Cowboys' utter lack of impressive pass-catching weapons. Zeke was the overall RB2 two seasons ago and RB3 in PPR fantasy points per game last season.

In this edition of the Perfect Draft Series, I'll be walking through a perfect draft from the fourth slot in a 12-team ESPN PPR league. Each pick was optimized using projections and value-based rankings from the 4for4 Draft Hero tool.

The Draft Hero has opted for the perennial stud WR in PPR over Ezekiel Elliott in this draft. In terms of projected points, John Paulsen has Brown at 324 and Elliott at 314. Brown outscored Elliott in PPR points per game last year, and Zeke outscored AB in 2016.

I don’t mind this pick one bit. It does, however, put an emphasis on building RB depth moving forward. Others may argue it, but it goes back to my philosophy that you can’t win your league in the first round, but you can lose it. I think Elliott may have a slightly higher ceiling based on his touch volume, but he also has a lower floor. RBs get injured more often than WRs, and the Cowboys offense carries far more risk than the Steelers this season. 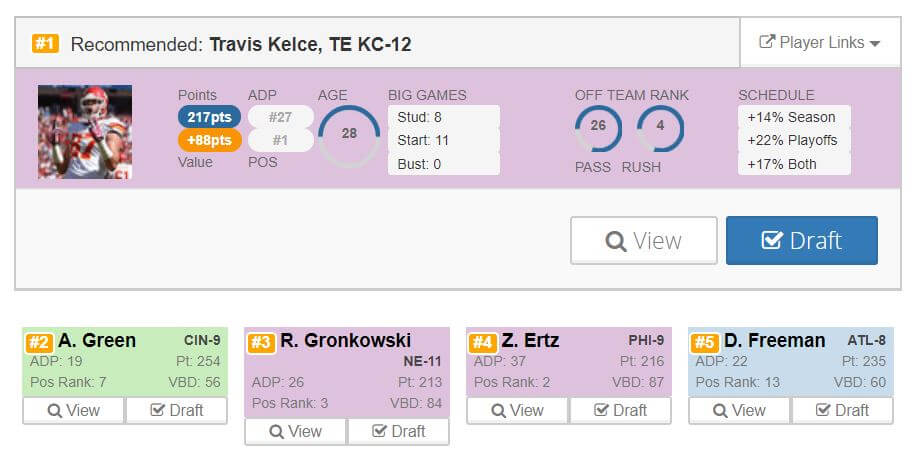 This is where how you build your roster can already come into play using Draft Hero but also understanding ADP on your site. Freeman was fifth of five recommended players here. Why did I take him? Because at least one of the three elite TEs are regularly available in the third round this season, and we already have Brown; therefore, A.J. Green is not needed. As it turns out, Jerick McKinnon is ranked higher than Freeman. So why did Draft Hero recommend Freeman? McKinnon has an ADP on ESPN of 31, and we next pick at 28. Freeman won’t be there next round, but McKinnon has a great chance to be there.

Freeman also has a ton of upside in his second year with offensive coordinator Steve Sarkisian. He has two top-six finishes at his position to his resume, and few running backs are used near the goal line more than Freeman.

Taking Zach Ertz here is tempting, as the drop from our top-three projected TEs to the rest of the field is large, but our Director of DFS, T.J. Hernandez, has found that Ertz is a prime candidate for negative touchdown regression this season. That concerns me. I refuse to pass on Jerick McKinnon if available this season. The only risk I see with him is a potential injury from never being the lead back before for a full season, but I just do not see any scenario where he busts because he’s not #goodatfootball.

He was hand-picked by Kyle Shanahan, a coach who has given his RBs fantasy glory over and over again, seemingly with names tossed to the fantasy garbage heap in the drafts that year. Even Steve Slaton was awesome under Shanahan. Devonta Freeman was closer to a 10th-round pick than second-round pick before he broke out in Shanahan's system. Freeman was the overall RB1 that season. Combine that coaching history with McKinnon’s ridiculous athleticism, and I’m salivating having him on the same roster as Bell. 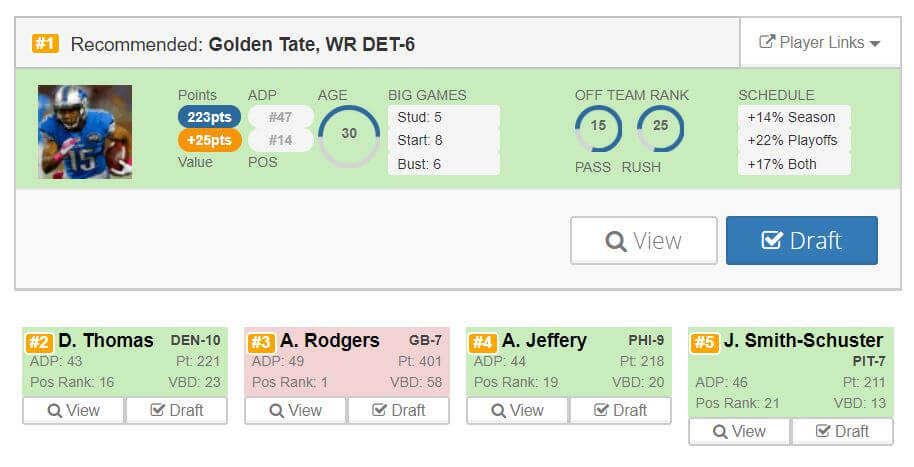 Golden Tate is a PPR specialist. He has four consecutive 90-catch seasons with the Lions. Tate is not an incredibly efficient receiver, but the Lions present a high volume passing attack with Matthew Stafford targeting Tate frequently on short-to-intermediate routes. That makes him less useful in standard leagues (WR23) versus PPR (WR14). If this were a standard league, I would have taken Demaryius Thomas over Tate.

It’s also interesting to note taking the QB1 Aaron Rodgers at this point can be justified, according to Draft Hero. However, it is against my draft strategy to pull the trigger that early on a QB.