Week 3 boasts a slate of some big favorites, and another opportunity to take advantage of overreactions from the first few weeks.

With the help of PoolGenius' customizable tools and data, I’ll go over the best value picks for Week 3, along with the top suggestions for survivor pools. With this info, you should be able to make smart decisions in order to get back on track or keep you going if you’ve had a strong start to the season thus far.

Last week was better for me in pick’em land as my selections went 3-2. The Rams, Packers, and Broncos all came through, while the Bengals and Vikings let me down. This brings my season total to .500 at 5-5. Let’s move forward to Week 3, where hopefully we find success in both pick'em and survivor formats.

Before I get into the picks, note that I’m not suggesting you should make all of the picks listed below. The best Week 3 picks for your NFL pool depend on strategy factors such as your pool’s size, rules, and prize structure, plus situational factors like your current place in the standings and the number of weeks remaining.

However, these picks do provide some of the best opportunities to differentiate your Week 3 picks from your pool opponents by taking on only a modest amount of risk, or no additional risk at all.

The Colts' early-season struggles have been rough to watch, and they face a Chiefs team that’s rolling. Kansas City is a 6.5-point favorite in this matchup, with 72% Vegas odds, and PoolGenius giving them a 70% chance to win.

Like most of the heavy favorites, you’ll win or lose with the majority of your pool, and currently, 97% of the public is picking the Chiefs.

The Carson Wentz revenge-game narrative is great and all, but the Commanders are just unmatched coming into this NFC East contest. Washington’s defense is a sieve without Chase Young, and the Eagles have shown us their weaponry via both air and ground.

Philly is a 6.5-point road favorite in this one, with 71% PoolGenius odds to win. The public is backing the Eagles 90% of the time so you’ll be with most of your pool mates.

Part of me feels like this game is a trap, but after watching the Bills the first two weeks it’s tough to see them losing this contest. Josh Allen is 7-1 against Miami with multiple touchdowns in every game he’s played against this fellow AFC East team.

The Bills are 5.5-point road favorites with 86% of the public picking Buffalo. It’s a high number, but there are three teams with higher pick percentages, giving some value to the selection.

Both of these teams lost to the Dolphins and most of the damage was done through the air. The good news here is that the Patriots’ passing game hasn’t been great outside of Jacobi Meyers, plus Mac Jones is dealing with an injured back. Keeping up with Lamar Jackson is a big ask, and New England won’t get it done this week.

The Ravens are three-point favorites with 60% win odds via PoolGenius and Vegas. Only 81% of the public is picking the Ravens so there is some advantage to this selection in Week 3.

The Browns are 4.5-point favorites in this one but I see it as more of a pick’em. Both teams have struggled with the passing game on both offense and defense, and this should come down to the run game with a defensive-heavy battle. Pittsburgh has seven sacks through two contests and the Browns just yielded 31 points to the Jets. I’ll take the Steelers in a road upset by a small margin.

Public bettors are on Pittsburgh 35% of the time so there’s value in being contrarian here.

The last piece of the survivor pool puzzle is future value. If you fire off a powerful team in Week 3, you won’t be able to use them later. 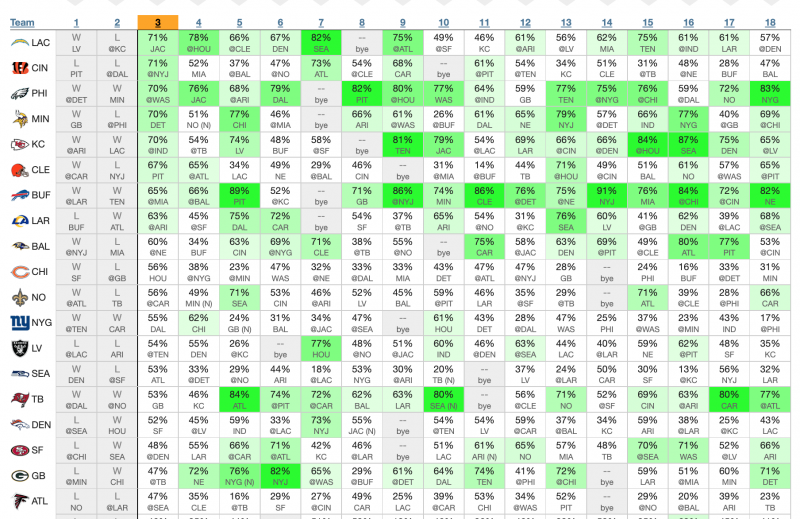