With the explosion of the NFL's passing offenses, more and more fantasy football leagues are incorporating PPR scoring. This type of scoring puts a bigger emphasis on pass-catchers while subsequently devaluing our old-school, plodding running backs. Any time you're in a full-PPR league, your focus should be on players who will finish with a higher target share and ultimately a high number of targets. This is especially true at the running back position where pass-catching specialists can carry significantly more value than they would in standard leagues.

Since this scoring setting makes more running backs fantasy-relevant, it's a great opportunity to incorporate a hero-running back build, which allows you to stack up on elite pass-catchers while also drafting an elite tight end or quarterback. Drafting in the 12th spot means you're going to miss out on the elite tier of players you'll find in the top six, but it also allows you to double up early. Anytime you're at the beginning or end of a round, you can become susceptible to positional runs, but it's important to not let your league mates dictate your own selection.

In this article, I will walk through a draft in a 12-team full-PPR ESPN league from the 12th spot. With this draft setting, I will be focused on implementing a hero-running back build. With my second running back spot, which will ideally be filled later in the draft, I want to focus on upside. Each pick was optimized using projections and value-based rankings from the 4for4 Draft Hero tool. 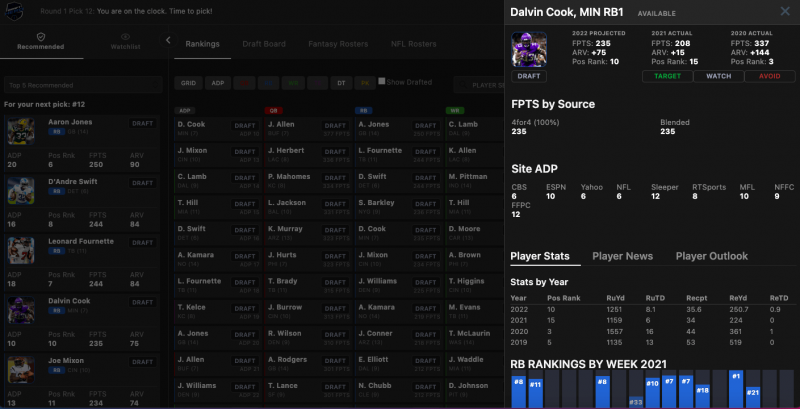 If Dalvin Cook falls to you at the backend of the first round, he's absolutely a smash pick. Cook was the recommended pick by Draft Hero and it's easy to see why. He was the RB11 in full-PPR PPG last year. This was despite some awful scoring luck that is highly unlikely to repeat itself. Last year, he had 45 red zone carries—third most in the NFL—and scored just six touchdowns on the ground. In 2020, he had 58 red zone carries and scored 16 times. He had 43 red zone carries in 2019 and scored 13 times. Based on his 2019 and 2020 scoring rates, fantasy managers should be expecting him to score a lot more than he did last season.

Through his first five seasons in the league, he's never averaged less than 3.77 targets per game, which amounts to 64 over 17 games. With Kevin O'Connell coming over from the Rams to be the new head coach for the Vikings, the expectation is that Minnesota will be a more up-tempo offense in 2022. Cook had been the RB2 in PPG from 2019–2020 and there is a good chance he could be the RB1 in 2022 in this offense. The draft board and the Draft Hero suggestion made this selection such an easy pick.