Week 2’s winning lineups from the biggest contests on FanDuel and DraftKings can be used to tease out lineup-building strategies and offer clues on how you could have landed on a similar team. Reviewing your hits and misses each week is imperative if you want to be a profitable DFS player but examining winning lineups is also a useful exercise in cultivating a winning approach. 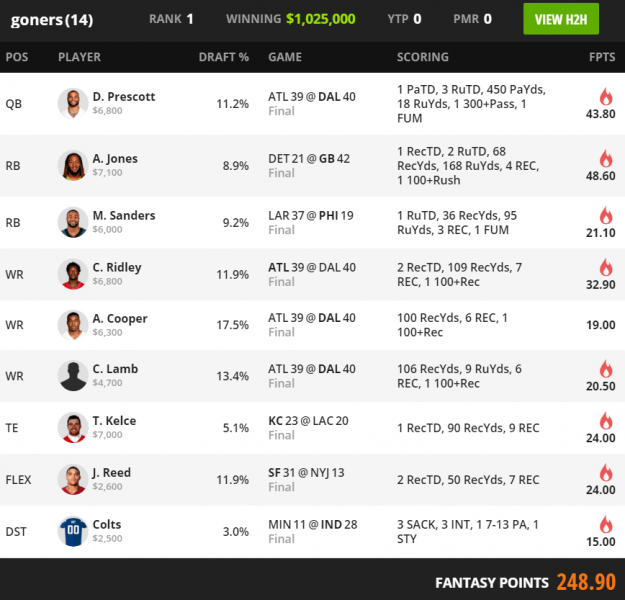 The game with the highest total of the week is always going to be popular but rostering four players from such a game—as goners did with the Cowboys and Falcons—can often offset the high ownership. As for a contrarian strategy, this lineup went beyond targeting low-owned players. In addition to avoiding a high-priced running back, while the majority of lineups rostered either Derrick Henry or Ezekiel Elliott in perceived blow-up spots, goners opted for a tight end in the flex, a strategy that has rarely won large tournaments but one that might be worth using when trying to be unique with an uber-chalky game stack. This lineup ended up with an average ownership of 10.2%, which is 2.5 percentage points lower than the average ownership of winning Millionaire lineups in 2019.

Aaron Jones was the Week 2 skeleton key and a play that a lot of players in the 4for4 discord landed on late in the weekly research process (be sure to look for Saturday updates weekly in write-ups and in discord). There were many backs projected as a better value than Jones last week and his snap share (54%) in Week 1 could have been a red flag. On the other hand, Jones was coming off of a 20-touch game and would be facing a bad defense in a spot where Green Bay was a big favorite, indicators of favorable game flow for running backs. The biggest game theory reason to play Jones, though, was the fact that Davante Adams was projected to be one of the most popular players on the slate. Weekly wide receiver scoring is inherently volatile and pivoting to that team’s running back is one of the best ways to gain leverage on the field in large GPPs.

After Boston Scott and Corey Clement struggled in Week 1, Miles Sanders was in a position to inherit the workload that he was expected to carry all offseason. His price tag didn’t reflect that projected workload and Sanders’s salary made him a natural pivot off of chalk Jonathan Taylor. Taylor slightly outscored Sanders but the Eagles running back offered the low ownership needed in GPPs.

As a team, the Chiefs were expected to be criminally under-owned. Kansas City’s 28-point implied total was nearly as high as any team last week and every relevant Chiefs starter has GPP-winning upside against any defense. With Derwin James out, Travis Kelce should have been the priority pay-up option at tight end in a week where the preferred strategy was to save as much salary as possible at the position. 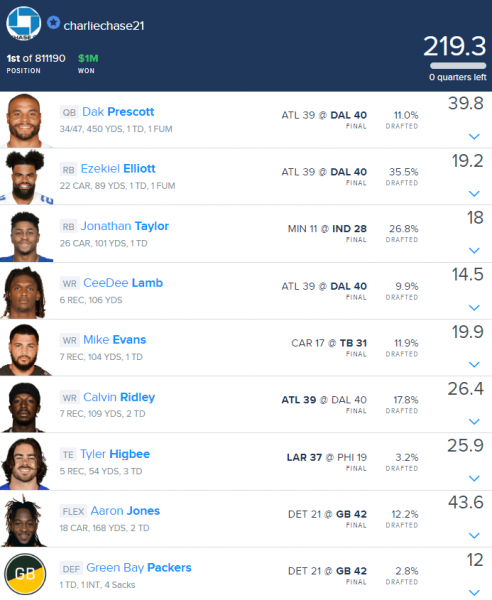 The most notable difference between the Sunday Million winning lineup and the Millionaire winner was at tight end. Tyler Higbee was featured in the Week 2 FanDuel GPP write up after Washington leaned heavily on their tight end against the Eagles in Week 1. Projected ownership showed that Higbee was going to be an afterthought despite the trend that Washington showed against Philadelphia.

Turning back to the theme of maximizing correlation in tournament lineups, it should be noted that 14 of the last 19 Sunday Million winners have stacked a running back with his defense or with another offensive player in that game. Those stacks have been in addition to their primary quarterback stack.

Aaron Jones’s monster week was a prime example of why DFS tournament strategy goes far beyond projections and lineup optimizers. Concepts such as leverage and price pivots should often override median projections and most likely outcomes, but it’s easy to be blinded by the latter—I’m as guilty as anyone. The goal in GPPs is to benefit from “black swan” events that others failed to prepare for.

With that in mind, moving forward my weekly GPP write up will feature a section that highlights the biggest leverage plays, best price pivots and potential contrarian salary allocations. Oftentimes, these plays will overlap with players that I already want to be overweight on but it will also bring to the forefront those players that might not be core plays but are possible leaderboard changers. Too many times, we look back and realize that we missed the plays that were right under our nose —this addition to our weekly offerings should minimize those misses.