Scheme and playcalling matter since they can help clear out the box for the running back. The Los Angeles Rams virtually use one formation that includes 1RB-3WRs-1TE. Constantly using three receivers makes it so defenses have to spread out to cover Robert Woods, Cooper Kupp and Brandin Cooks. And when defenses spread out to cover those receivers, that leaves fewer defenders in the box resulting in Gurley having sufficient space to run. Finally, the offensive line of course matters since they are the ones clearing the lane for the running back. This is what makes projecting running backs so difficult year to year since efficiency is heavily influenced by play calling and offensive line performance.

New Green Bay Packers head coach Matt LaFleur was the offensive coordinator of the Los Angeles Rams in 2017 and the offensive coordinator for the Tennessee Titans in 2018. We all know how well the Rams have performed running the ball the past couple of seasons. This leads me to hypothesize that LaFleur may try to create a similar style offense in Green Bay. One statistic I love referencing is Football Outsiders’ Adjusted Line Yards which attempts to measure run blocking effectiveness by an offensive line. The Titans ranked 23rd in this metric before LaFleur took over as offensive coordinator in 2018 where under him they moved up to 17th. The Packers have ranked in the top 10 in this metric the past two seasons. There is no reason to think the Packers run blocking will regress in 2019 since they didn't lose any of their offensive linemen from 2018. In fact, they might even improve if LaFleur uses this spread-them-out playcalling to clear the box.

The graph below shows the relationship between Adjusted Line Yards (O-Line Rating) and fantasy points per game. The offensive line rating is able to explain 12% of the variation of data points all by itself. Therefor offensive line's performance directly factors into fantasy production for running backs. 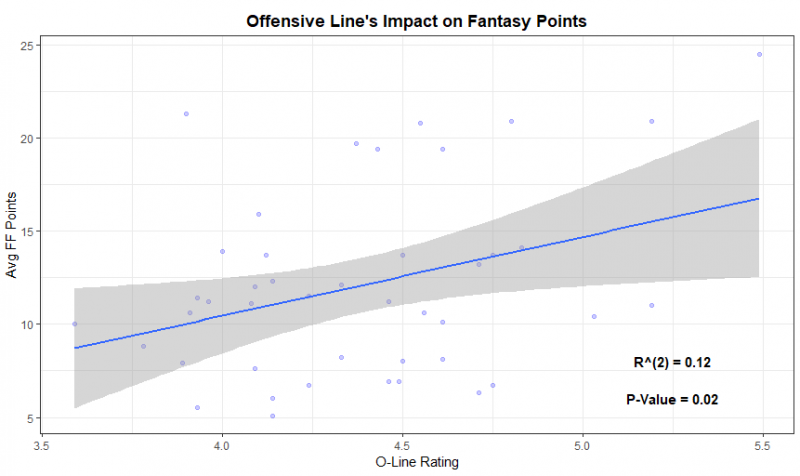 Aaron Jones was Very Efficient in 2018

While it may be difficult to compare running backs coming from different situations, it isn’t difficult comparing backs from the same team. Jones has battled fellow running back Jamaal Williams but the two didn’t even come close in efficiency in 2018. Below are each running back’s yards per carry for different sections of the field and, as you can see, Williams didn’t come close to Jones in any segment of the field. The job should be Jones’ in 2018.

Next, I’ve mentioned Expected Points Added in previous articles and how it is the best stat for measuring performance since it takes into account many aspects occurring in the game. Jones ranked seventh in EPA per touch in 2018 (minimum 140 touches). Jones was only beaten by names such as Alvin Kamara, Todd Gurley and Christian McCaffrey. That is some good company to be a part of. EPA for running backs is also greatly influenced by offensive line performance. This is illustrated below as Adjusted Line Yards (O-Line Rating) is able to explain about 40% of the variation between EPA data points all by itself. As I mentioned earlier, Green Bay should be strong in Adjusted Line Yards yet again next season. This would then lead to a strong EPA and fantasy production for Jones in 2019.

Putting It All Together

As I mentioned earlier, the stars need to align for a running back to have success and I can see them aligning for Aaron Jones. Matt LaFleur comes from a coaching tree that emphasized running smart which is spreading out the offense using three-receiver sets to open up the box. When LaFleur became the offensive coordinator of the Titans, the run blocking unit quickly went from below average to average in Adjusted Line Yards in just one season. He now heads to a team that has been excellent in this metric two years in a row, and should yet again be elite in 2019.

We also know that offensive line performance has a direct statistical relationship with running back fantasy success. So it seems LaFleur will do his job—now Jones needs to do his. Even if Jones experiences a slight regression in 2019, he should have no problem producing in the fantasy world. The job should be his since he demolished Jamaal Williams in every efficiency metric imaginable. And finally, Jones was at the top of the league in EPA per touch terms in 2018 surrounded by some stud running back names. According to 4for4's rankings, Jones is currently the RB25 in half-PPR leagues and seems like a great low-risk value. If LaFleur uses clear-the-box play calling on Jones, there is serious production potential.

Player Profiles
D.J. Chark vs Laviska Shenault: Who Will Emerge in 2021?

Strategy
Understanding Your Fantasy Football League
by Brandon Niles · May 17, 2021

Strategy
How to Play Fantasy Football
by Brandon Niles · May 17, 2021