Every year, each draft position has different strengths and weaknesses. Often, the optimal draft position changes annually based on the specific elite prospects. This year, the middle of the draft presents the most challenging decisions. With the top pick, Todd Gurley is the obvious selection. With a late pick, the prospect of doubling up on the limited running back options is a pretty clear strategy. With the middle picks, however, it’s hard to decide whether to take one of the remaining running backs or an elite receiver, hoping there are still great options available with your second pick. I chose the fourth spot for this article because it’s the first slot where I have a true quandary about which position to attack.

In this edition of the Perfect Draft series, I'll be walking through a perfect draft from the fourth slot in a 10-team ESPN PPR league. Each pick was optimized using projections and value-based rankings from the 4for4 Draft Hero tool.

I started this simulation multiple times. Sometimes the third pick in front of me would be Ezekiel Elliott and sometimes it would be David Johnson. Either way, Draft Hero recommended the top running back available. In this simulation, Elliott is the pick. The Cowboys still boast one of the best offensive lines in the league and are committed to running the ball. Elliott averaged 24.2 rushing attempts per game and rushed for 983 yards and seven touchdowns, despite serving a six-game suspension.

I gave heavy consideration to Antonio Brown in this spot. In a PPR league that starts three receivers, Brown can be a huge advantage for your roster with his consistently elite production. However, I wasn’t confident a top10 running back would make it back to me in the second round, and I see a large drop-off at the position. Elliott or Johnson at this spot is the best option for me.

As I feared, 10 running backs are off the board by the time it gets back to me in the second round. Luckily, several excellent receivers are on the board. Draft Hero recommends I grab Michael Thomas, who would be a fine pick at this spot. However, I personally like A.J. Green better, so I veer away from Draft Hero in this situation. Either way, locking up a legitimate WR1 in this spot is the best way to go.

Green and the Bengals are coming off a bad season by his standards, but he still wound up with 1,078 yards and eight touchdowns. Most importantly, he was targeted 145 times and has totaled at least 100 targets every year since entering the league in 2011. Thomas would be solid as well, but with more weapons in New Orleans this season, I worry his 149 targets from last year will be spread around more by Drew Brees. You can’t go wrong with these two fantasy studs, though. 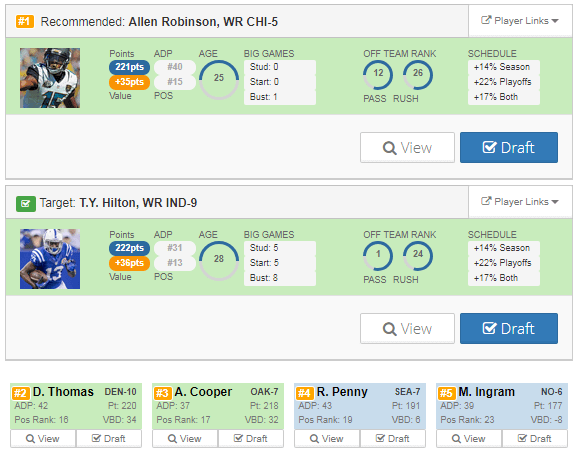 I wanted to look at the running back position with my third-round pick, but with Joe Mixon, LeSean McCoy and Rashaad Penny listed as my best options, Draft Hero recommends I go with my second receiver. I love T.Y. Hilton this year and following my draft plan, Draft Hero shows me this is the point I need to take him if I want to secure him on my roster. While Allen Robinson is suggested, Hilton is projected as a similar prospect, so I go ahead and pull the trigger.

I love this feature. Draft Hero reminds me when it’s time to take the players I have my eye on. A quick glance at the remaining receivers available—Robinson, Demaryius Thomas and Amari Cooper—and I’m confident Hilton’s value is about right at this point in the draft. He’s only 28 and should benefit from the expected return of Andrew Luck. He led the league in receiving yards just two seasons ago with Luck under center.

Only four running backs compared to six receivers went off the board in between my third and fourth pick and Draft Hero recommends I take my second running back in the fourth round. Kenyan Drake has tremendous upside as the big-play, pass-catching back in Miami. With Ryan Tannehill looking healthy after missing last season with a knee injury, the Dolphins offense should improve over last year’s fourth-worst rushing attack.

Looking at the value at receiver later in the draft, I knew I had to lock up a second running back. Drake has question marks surrounding his health due to his slight frame, and also his usage with the arrival of Frank Gore in free agency. All the available backs have question marks, however, so I took Draft Hero’s suggestion and went with the high upside of Drake.

Continue reading to see how the rest of Brandon's roster shakes out and to see which picks he deemed to be the best and worst values of the draft, as well as any final takeaways that may help you on draft day...