How Do Rookies Perform When Compared to Veterans with Similar ADPs?

When I conduct a fantasy football study, the results usually confirm my initial take (a.k.a. my hypothesis, if we want to get technical), but that was not the case with the rookie study I’m about to discuss.

I went in to the data-gathering portion of the study thinking that rookies – especially receivers – should generally be avoided on draft day and was surprised to find that in certain cases rookies may hold more value than their veteran counterparts.

Keep in mind that our sample sizes are extremely small since there are only a handful of rookies drafted each year. Trying to balance a large enough sample size while keeping the data relevant is a delicate balance. Is it really helpful to know how rookies performed fantasy-wise back in 2005 when the league is significantly different now? Even the NFL-readiness of rookies has changed over the last 10 years.

To that end, I looked at all of the rookies with an Average Draft Position (ADP) in the first 12 rounds of drafts in the last five seasons. (The late rounds are like Las Vegas. What happens in the 13th round or later stays in the 13th round or later. It’s no business of mine whom you select with your 15th-round pick.) There are a total of 22 running backs and 17 receivers in the study, so the sample sizes are definitely small. Click here to see a list of the rookies involved in the study.

I compared their total fantasy points scored and points per game (PPG) average to the three veteran players (at their position) selected before and after the rookie was drafted. For example, last year, Lamar Miller, Frank Gore and Mark Ingram were drafted before Melvin Gordon, while Latavius Murray, Alfred Morris and Carlos Hyde were drafted shortly after Gordon, on average.

Here’s a table summarizing my findings:

I separated each position by groups of rounds since a rookie running back going in the early rounds probably has a clearly defined role (i.e. Ezekiel Elliott in 2016) whereas backs going in the 8th round or later are probably in a position battle or are part of a committee. The same goes for receivers. Those going in the 7th round or earlier (Amari Cooper, Nelson Agholor, Julio Jones, Tavon Austin, Sammy Watkins and Brandon Cooks) were projected to have big roles right away. I probably could have extended that to the 8th round since that’s where A.J. Green and Kelvin Benjamin went and the fantasy community was fairly certain those two would make an immediate impact.

Looking at the running back position, the early-round rookies fared significantly better than the late-round rookies. Early-round rookie RBs scored 24-28% more fantasy points than their veteran counterparts while averaging 7-8% more on a per game basis. The difference between these two measures is the result of more games played by the rookies. As we get into the 8th round, the veteran running backs tend to fare about the same as or better than the rookies. On a per game basis this advantage ranges from 6% for the “Next 3 Vets” to 22% for “All Vets.”

To illustrate this further, here are a couple of graphs that show how rookies compare to their veteran counterparts. 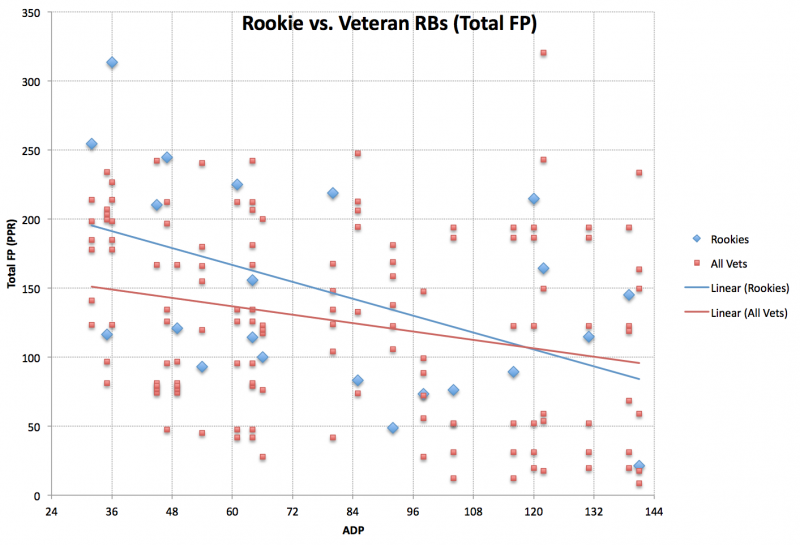 I used the rookie’s ADP for the six veterans drafted around the same time so that you can see how each rookie compared to his corresponding vets by looking directly above and below his blue marker.

As a general rule of thumb, rookies drafted in the first four rounds tended to do better than the veterans who were drafted around the same time, with only Gordon falling below both the blue (rookie) and red (veteran) trendlines. Seven of the next 17 running backs in the study finished above the veteran trendline, and three – Giovani Bernard, LeVeon Bell and Jeremy Hill – were the best picks at that point in their respective drafts. 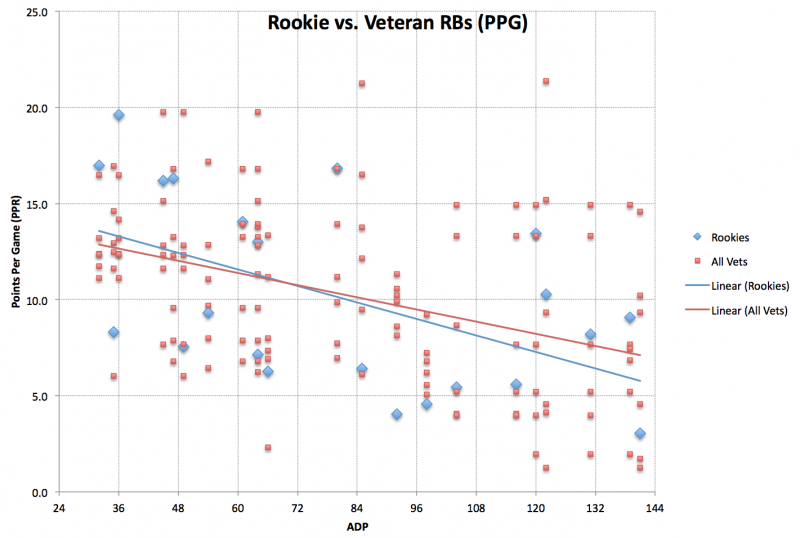 On the per game chart, we can see the trendlines get a lot closer, which indicates rookies tend to play in more games than their veteran counterparts. Again, the early round running backs fared well – four of the five drafted in the first four rounds out-produced most (if not all) of their veteran competition. In 5th-9th rounds, the rookies did not typically perform as well as the vets on a per game basis, but the 10th-12th round rookies did just fine.

Let’s go back to the summary table.

The script has apparently flipped when it comes to early-round receivers. They score 9% less than “All Vets” and just 2% more than the “Next 3 Vets.” On a per game basis, the results are similar, which makes sense since injuries are less common at the receiver position than they are at running back.

Rookies going in the 8th-12th rounds tend to fare better than their veteran counterparts, scoring about 14% more on the season and 5% more on a per game basis.

Here is a Total FP chart for the receiver position: 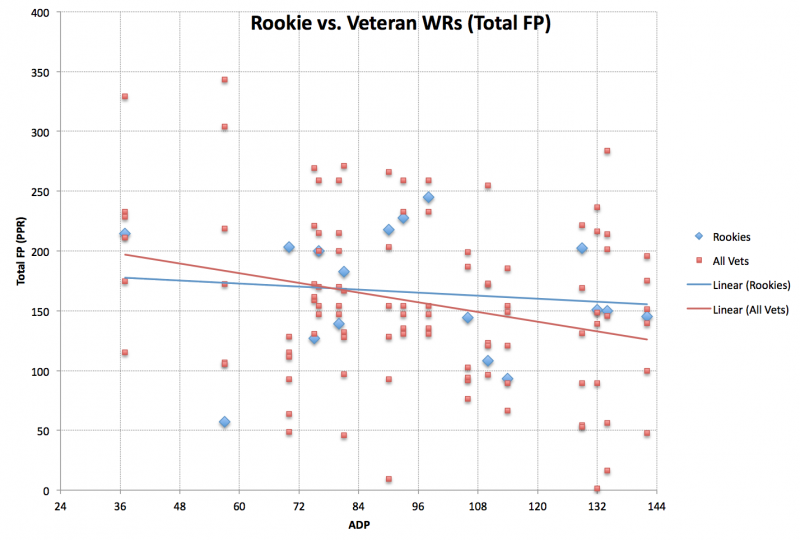 Rookie receivers seem to produce pretty well starting in the 6th round, though there is no sense in drawing any conclusions given the small sample size of the 1st-5th round group, which only consists of two players, Amari Cooper and Nelson Agholor. Cooper was an adequate 4th round pick while Agholor was an utter disappointment in the 5th. 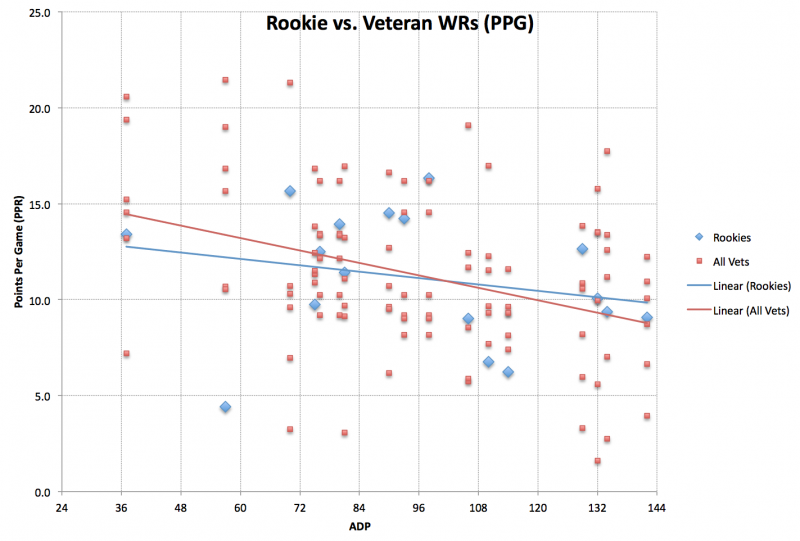 Eight of the nine rookie receivers drafted in the 6th-9th range produced pretty well to very well, with Tavon Austin the only major disappointment. The receivers in the 10th-12th range were a mixed bag, though the wideouts going in the 11th-12th seemed to outplay most of their veteran counterparts.

My highest-ranked rookie running back is Ezekiel Elliott at #4 in PPR formats. He’s going to be drafted in the 1st or 2nd round in the vast majority of fantasy drafts, and given the history of recent early-round RBs, he’s a strong bet to perform well. Granted, none of the running backs in the study went earlier than the 3rd round, but the fantasy community is overwhelmingly confident about Elliot’s ability and situation.

After Elliott, I don’t have a rookie running back in my top 40. Training camp might change that, however. Will C.J. Prosise, Kenyan Drake or DeAndre Washington earn sizable 3rd-down roles? Will Jordan Howard beat out Jeremy Langford? Can DeMarco Murray hold off Derrick Henry? Might Kenneth Dixon rise to the top of the depth chart in Baltimore? How about Wendell Smallwood in Philly? Time will tell.

At receiver, my top-ranked rookie is Corey Coleman (#37), who should produce based on workload alone as long as Josh Gordon remains suspended. Laquon Treadwell and Sterling Shepard seem to be the next two rookies most likely to play starter’s snaps in 2016 given the state of their respective receiving corps. Coleman is going in the 6th, Treadwell in the 7th and Shepard in the 8th, so they’re all in the rookie receiver ADP sweet spot, at least according to this study.

After completing this study, I’m a bit more likely to pull the trigger on a middle-round rookie receiver or an early-round rookie running back. I’ve never been morally opposed to drafting a rookie runner if the situation were right, but I’ll admit to being hesitant when it comes to rookie receivers. I tend to instead target undervalued veterans (e.g. Larry Fitzgerald last year) and it has paid dividends over the years.