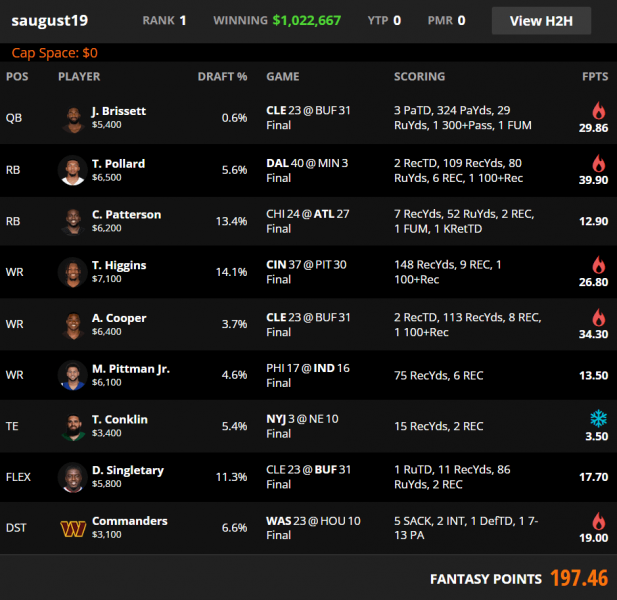 Only one other Millionaire winner over the last three-plus years has used a sub-1% quarterback.

Using a QB/WR/Opp RB stack and no other correlation, this is the second Millionaire winner this year to use fewer than four correlated players.

Of the 11 Millionaire winners in 2022, 10 have correlated at least one running back in some fashion.

Always flex the player with the latest start time possible in order to maximize late swap options. This lineup got away with ignoring this heuristic but it could be a huge leak in your game.

Buffalo’s passing game projected for the highest cumulative ownership on the slate. Playing the opposing passing game with a Bills running back proved to be one of the best leverage plays of the week.

Dallas had the second-highest cumulative passing game ownership projection on the slate and CeeDee Lamb was the most rostered player, making Tony Pollard one of the best contrarian plays while the field avoided him with Ezekiel Elliott returning to action. 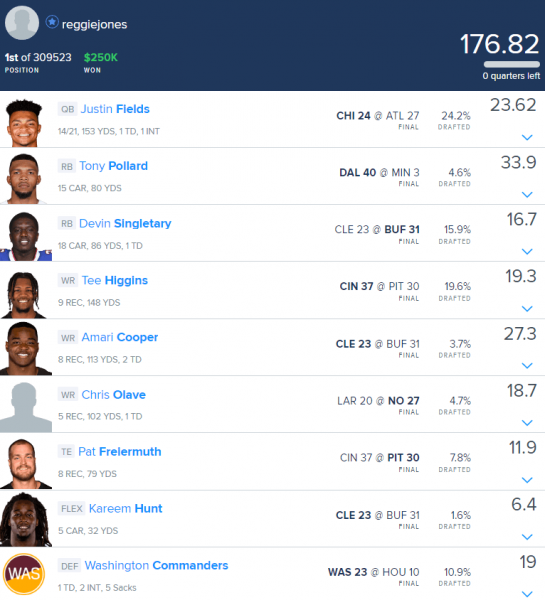 Week 11 marked the second time since the beginning of 2019 that the Sunday Million winner rostered a quarterback with a rostered rate of at least 20%.

For the second time this year, the Sunday Million winner played a quarterback without one of his pass-catchers. This happened three times over the previous two seasons.

An RB/WR mini-stack has been used by the last four Sunday Million winners and eight times in the 11 winning lineups this season.

All but one winning Sunday Million lineup this season has correlated their tight end with another player in the same game.

Since Tony Pollard had a 4:25 kickoff, he should have been the player in the flex.

Buffalo projected as the fourth-most popular offense on the slate while just one offense had a lower cumulative ownership projection than Cleveland—pairing Amari Cooper and Kareem Hunt together helped this lineup separate from the field and was propped up by Devin Singletary on the other side.

Alvin Kamara had a 25% ownership ceiling which made Chris Olave a great stand-alone contrarian play.