The opening week of the NFL season wasn’t too crazy in terms of team upsets, but there’s still plenty of irrationalities to be found. This can lead to opportunities for great value picks in Week 2 when the public overreacts to the events of one week.

With the help of TeamRankings' customizable tools and data, I’ll go over the best value picks for Week 2, along with the top suggestions for survivor pools. I’ll do my best to give you the info to get you back on track, or keep you going if your first week wasn’t as disastrous as the majority of contest entrants out in the sports betting world.

It wasn’t the best start for me, as my picks went 3-2 on the week. Tampa Bay, Kansas City and Denver all came through, but Indy fell short against Seattle and the Jaguars disappointed in a big way. Let’s move forward to Week 2, where hopefully we find success in both pick'em and survivor formats.

Before I get into the picks, note that I’m not suggesting you should make all of the picks listed below. The best Week 2 picks for your NFL pool depend on strategy factors such as your pool’s size, rules and prize structure, plus situational factors like your current place in the standings and the number of weeks remaining.

However, these picks do provide some of the best opportunities to differentiate your Week 2 picks from your pool opponents, by taking on only a modest amount of risk, or no additional risk at all.

Houston showed us last week that they’re a better football team than anyone (outside of the teams’ families) thought they would be. However, they face a Browns squad that nearly beat the Chiefs in Week 1 and are now 12.5-point favorites at home. Both TeamRankings and Vegas have Cleveland at over 85% win probability in this matchup. I'm also on board.

The Browns are the choice by 92% of the public, so you will win or lose with the bulk of your pool.

Las Vegas has to travel on a short week to face a smothering Pittsburgh defense that shut down Josh Allen and the Bills in Week 1. The Steelers' front seven should also limit Derek Carr on Sunday, ensuring a second win for Mike Tomlin’s team.

Both Vegas and TeamRankings have Pittsburgh as winners by close to 70%, with 82% of public bettors in the same boat. They’re favored by 5.5 points at home, but this Steelers team has the potential to best the Raiders by double-digit points.

The Seahawks, courtesy of new OC Shane Waldron, came out swinging in Week 1, and it was truly refreshing to see. This week they get a home game against a Tennessee team that couldn’t seem to make anything happen last week. Seattle is favored by 5.5 points, with TeamRankings win odds of 67% and 68% via Vegas oddsmakers.

The public is on the Seahawks 91% of the time, which is a lot, but it is lower than a few of the games in the same spread range like Arizona (93%) and the Rams (92%). I’d be remiss to leave out the fact that Pete Carroll has never lost a home opener in his tenure in Seattle, so that's also a plus.

The Eagles played well last week, probably better than most expected but it’s tough to tell if they’re actually a good football team yet or not. San Francisco certainly has the talent, but almost blew a lead to the Lions last week as they have been known to do so in the past. TeamRankings has the 49ers with a 63% chance to win this contest, with 71% of the public backing the NFC West team.

There’s value in taking the 49ers here as three-point road favorites, and I think they’ll get out to a big lead, let Philly back in to make it interesting and then ultimately come out with a victory.

This pick is definitely not appropriate for all pools. If you’re in a smaller, season-long pool, it may not be worth the risk. However, if you’re involved in a single-week contest or your pool has weekly prizes, it could be a contrarian way to go.

Chicago is favored by three in this contest, with just 42% Vegas odds for the Bengals to come out on top. The Bears could be down their third-string left tackle on an already depleted offensive line, with a juggling act at the QB position.

Joe Burrow and the Bengals have already shown up another NFC North team this season, so why not go back-to-back in the form of a close upset? So far, 55% of the public is on Cincy, but it may increase as injury updates come in.

The last piece of the survivor pool puzzle is future value. If you fire off a powerful team in Week 2, you won’t be able to use them later. 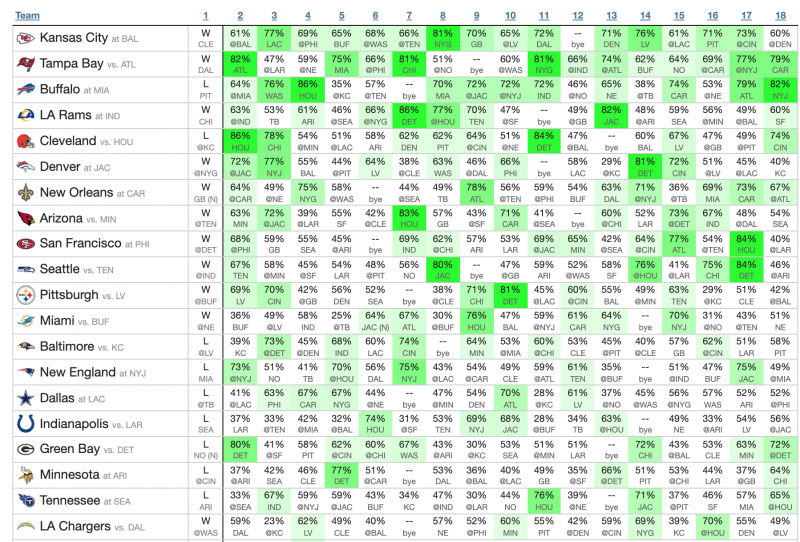