Can Kenny Golladay be a Fantasy Giant?

After a relatively unexciting start to free agency at the wide receiver position, the Giants made one of the biggest signings of 2021, giving fifth-year, ex-Lion Kenny Golladay $72 million over four years with $40 million guaranteed. Golladay rounds out an offense that now has one of the more exciting skill-position corps in the league but the fantasy success of Golladay and Co. depends on how good quarterback Daniel Jones can be.

In Kenny Golladay’s rookie season of 2017, he was largely relegated to WR3 duties in Detroit behind Marvin Jones and Golden Tate. Since 2018, however, he has been the clear alpha in the wide receiver room, accounting for just under 22% of the Lions targets from 2018–2019 before his injury-riddled 2020. While Golladay hasn’t seen the volume of the top-end fantasy receivers, the Giants’ new receiver has stayed fantasy-relevant with his efficiency, especially in terms of yardage. Consider his numbers as a full-time starter.

One of the main reason’s for Golladay’s output despite somewhat modest target numbers for a WR1 is the fact that he excels deep. Since the beginning of 2018, 99 active receivers have seen at least 100 total targets and just 12 have been targeted deep at a higher rate than Golladay (33% of targets). Among players with at least five targets per game last season, Golladay’s 14.6-yard average target depth was tied for the sixth-highest.

Even with his deep-ball prowess, Golladay was trapped in an offense that refused to maximize his potential. In his four years in the league, Detroit never ranked higher than 15th in neutral passing rate and they ranked 30th in deep-ball rate in his first season as a starter. Uncoincidentally, when the Lions ramped up their deep passes—they threw more than 15 yards downfield at the second-highest rate in 2018—Golladay turned in a top-five fantasy season.

The move to New York presents similar offensive concerns along with a downgrade at quarterback from Matthew Stafford, as well as increased competition for targets.

How Golladay Fits in With the Giants

Regardless of how many weapons the Giants have, it won’t matter if their quarterback can’t play well. Instead of making a second-year leap in 2020, Daniel Jones took a step back in his sophomore campaign, seeing his adjusted net yards per attempt drop from 5.38 in his rookie year to an abysmal 4.92 last season (31st of 36 qualified quarterbacks). That low efficiency was influenced heavily by his inability to avoid sacks—Jones went down on over 9% of dropbacks. Only three quarterbacks with at least 200 attempts last season posted a lower touchdown rate (2.5%).

While it’s certainly possible for Jones to improve with Golladay leading a receiving corps of Sterling Shepard, Darius Slayton and Evan Engram, along with pass-catching back Saquon Barkley, Golladay and the other pass-catchers will need their play-caller to cooperate if they want to be fantasy relevant.

As an offensive coordinator or head coach, Jason Garrett hasn’t led an offense that ranked higher than 16th in neutral passing rate since 2013—the Giants’ 54.4% passing rate in neutral situations last season was the ninth-lowest.

Talent begets targets and Golladay is clearly the best receiver on this team but it’s impossible to ignore his limitations with so many good, albeit not great, players around him. Engram, Slayton and Shepard all saw at least six targets per game last season and Saquon will certainly command his fair share when healthy. Similar to Golladay’s time in Detroit, he will again have to compete with another viable deep threat on the other side of the offense—Slayton’s 13.1-yard average target depth ranked 14th in the league in 2020. Garrett dialed up deep balls just 15.1% of the time last season, the sixth lowest-rate in football.

As John Paulsen pointed out in his initial reaction to this signing, the most likely scenario is that all the major players in this offense see a slight dip in volume. Even if Garrett calls passes at a high rate as he did in his pre-Scott Linehan days in Dallas, we’ve yet to see Golladay command elite-level target share in the 25% and higher range—this roster isn’t built to let him approach that number in 2021.

If there is a winner from the Kenny Golladay signing, it’s Daniel Jones. The third-year quarterback flashed enough in his rookie season to suggest some potential given a full cast of healthy weapons, and he rushes enough to offer some huge spike weeks. Traditional redraft players shouldn’t expect top-10 end-of-year upside, however, as the position is stacked with established, dual-threat quarterbacks in already great offenses. 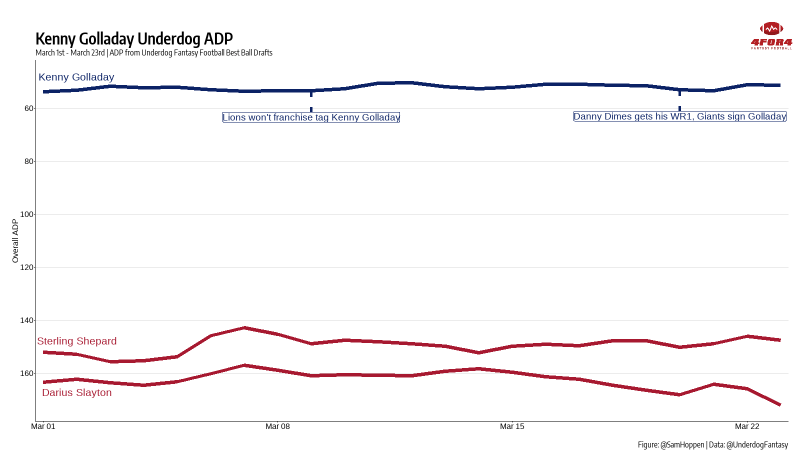 As for Golladay himself, he saw a slight bump in ADP since the signing, as illustrated above, and is priced fairly as the WR26 on Underdog—in a limited sample of drafts since the signing, Golladay is the WR23 in both FFPC and BB10 contests. For him to vastly outperform ADP, he will likely need at least one of the Giants pass-catchers to miss significant time or Daniel Jones to make a huge leap in year three coinciding with a shift in Garrett’s offensive philosophy.