Fantasy football is an ever-evolving game, one where last year’s strategies can become obsolete as quickly as they became the status quo. Preparing for these shifts and being ahead of the curve is a must for anyone that hopes to be a winning long-term player. By examining each position’s ADP and scoring trends over recent years, this study will lay out how to react to the nature of fantasy leagues in 2021.

Quarterback rushing attempts have been steadily rising in recent years and that hit an apex in 2020, with the position rushing the ball over 2,000 times for the first time ever.

The basis for streaming quarterbacks (or quarterback by waiver wire) and the late-round approach to drafting the position makes logical sense—the supply of usable quarterbacks far outweighs the demand in 1-QB, 10-team or 12-team leagues. The problem in the current state of fantasy football is the term “usable”.

Quarterback scoring has historically been quite linear, meaning that—save an outlier or two every year—the dropoff in scoring from one quarterback to the next is usually quite small and there is rarely a huge cliff between tiers. In recent years, the difference between the QB18–QB20 might have been a fantasy point or two per game when compared to quarterbacks in the 10–12 range. That changed in 2020. 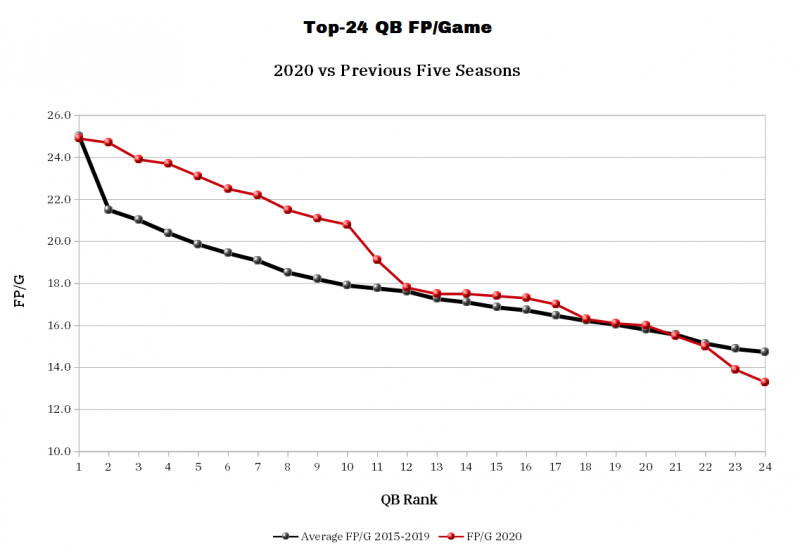 Last season, the top-end quarterbacks—mostly made up of dual-threat passers—lapped the field on a weekly basis. Of the top eight fantasy quarterbacks on a per-game basis last season (minimum eight games), seven ran at least 55 times—Aaron Rodgers needed a touchdown rate over 9% to join the group and he had a not-insignificant 149 rushing yards and three rushing touchdowns. Matt Ryan was the only top-12 quarterback with fewer than 30 rushing attempts.

To make matters worse for fantasy managers that didn’t have an elite fantasy quarterback, scoring was far from linear at the position, with a steep decline after the top 10. In the five seasons preceding 2020, the difference between the QB10 and QB20 was just 2.1 fantasy points per game—last season, that gap more than doubled. For anyone hoping to scrape together a Frankenstein’s starting-quarterback monster on the waiver wire, that’s a massive hill to climb.

Not surprisingly, streamers felt the consequences in 2021. Anecdotally, the struggle was obvious. Streaming picks at 4for4 collectively averaged 17.9 fantasy points per game last season, QB15 numbers; in the previous four seasons, the average finish for all streaming picks at 4for4 was QB8. This wasn’t just a function of bad luck, though—there simply weren’t as many opportunities for streamers to get QB1 production as there had been in recent years.

The outlook was even bleaker for streamers hoping to find high-end production off of waivers. We saw 67% of top-six fantasy games come from quarterbacks that finished outside the top six in 2019—that rate plummeted to 55% in 2020.

While it’s clear that quarterback scoring was concentrated near the top last season, this doesn’t have a huge impact on draft strategy or streamers if the field is bad at predicting which quarterbacks will be fantasy starters. Unfortunately, quarterback ADP is becoming increasingly efficient. This isn’t the case for other positions. 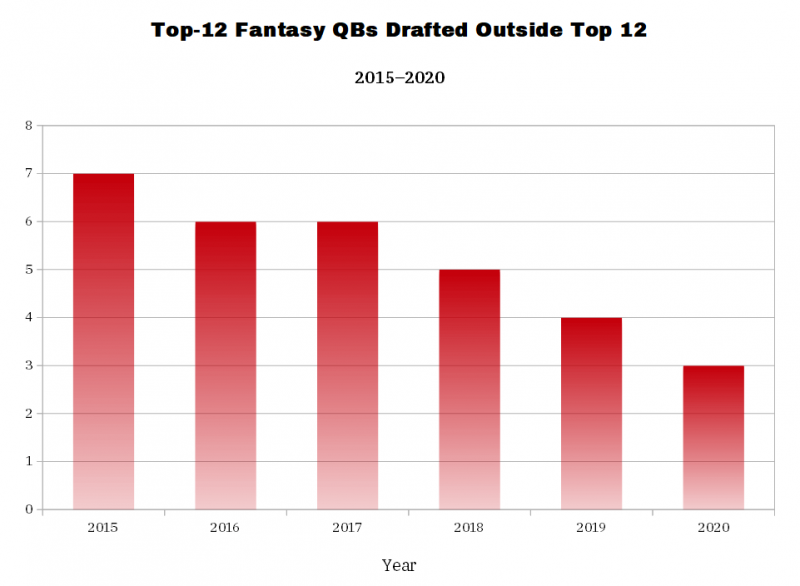 Rushing quarterbacks who are efficient passers are driving a wedge between themselves and the rest of the quarterback field in fantasy football, changing the once-linear scoring nature of the position. Combined with the ever-increasing efficiency in quarterback ADP, streamers are left chasing a gaggle of unicorns as opposed to looking up at one or two outliers per season like in the past. John Paulsen’s 2021 quarterback projections predict a similar trend to the one we saw last year, with a sharp tier break after the QB12. 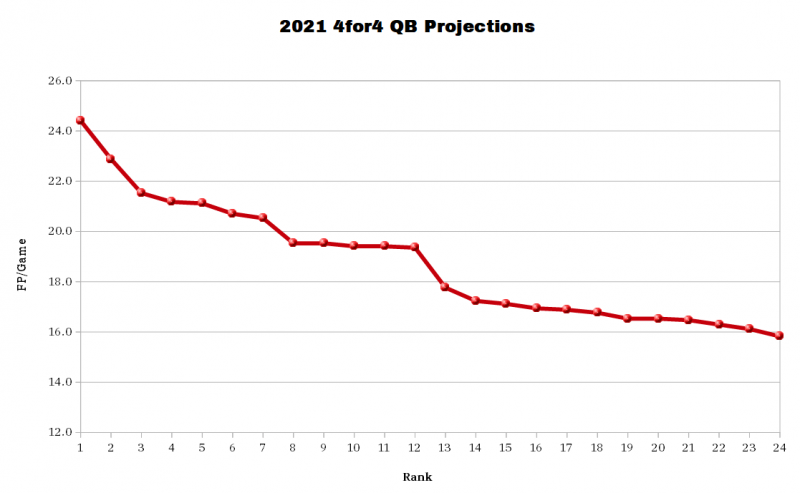 None of this is to say that fantasy managers should suddenly adopt an early-round quarterback approach—positional ADP is up compared to recent years and there is still a huge opportunity cost associated with passing on other positions in the early rounds. Whereas savvy fantasy players may have willingly waited to be the last manager to draft a quarterback, or even not draft one at all, 2021 is a year to prioritize a relatively high-ranked passer. The supply of undrafted quarterbacks that can post high-end fantasy numbers is lower than it’s been in recent years. In leagues full of late-round quarterback zealots, this might be the year to target a top three or four signal-caller.

Running Back ADP is Up, Wide Receiver ADP is Down

Top-tier running backs have dominated in recent years, with three of the best fantasy seasons of the last decade coming in the last three seasons. Add to that a player such as Alvin Kamara who has scored at rates never seen before and Derrick Henry’s 2,000-yard campaign last season and it’s no wonder that running backs are flying off of draft boards in recent years. 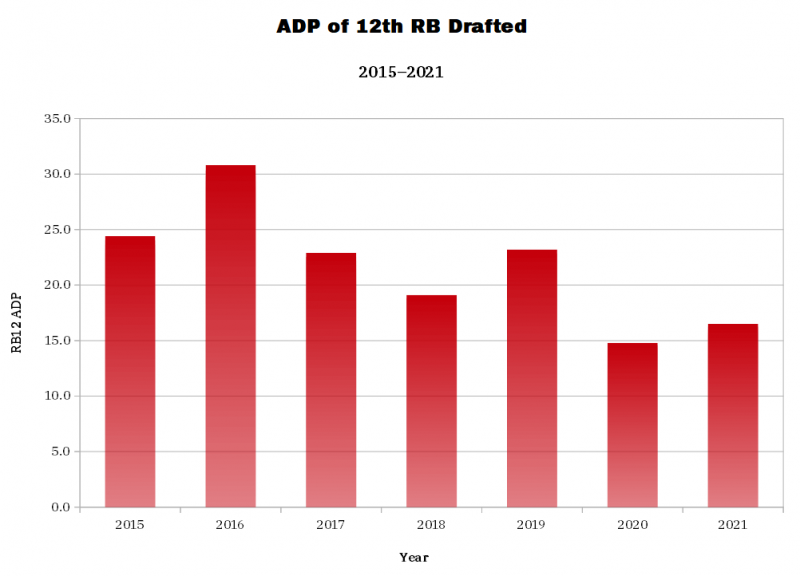 While it’s reasonable to want to lock up workhorse backs early in fantasy drafts, recent trends have fantasy managers scrambling to fill the position, driving up the price of fringe starters. 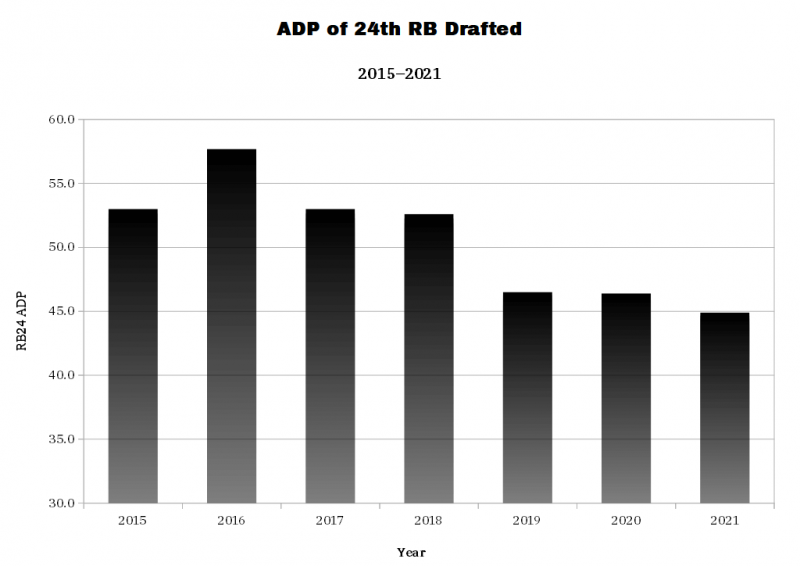 This has created a so-called “dead zone” at the position but it’s also spawned incredible opportunity, especially at wide receiver. With running back ADP increasing, wide receiver ADP has naturally fallen, especially among receivers with a top-24 ADP at their position. 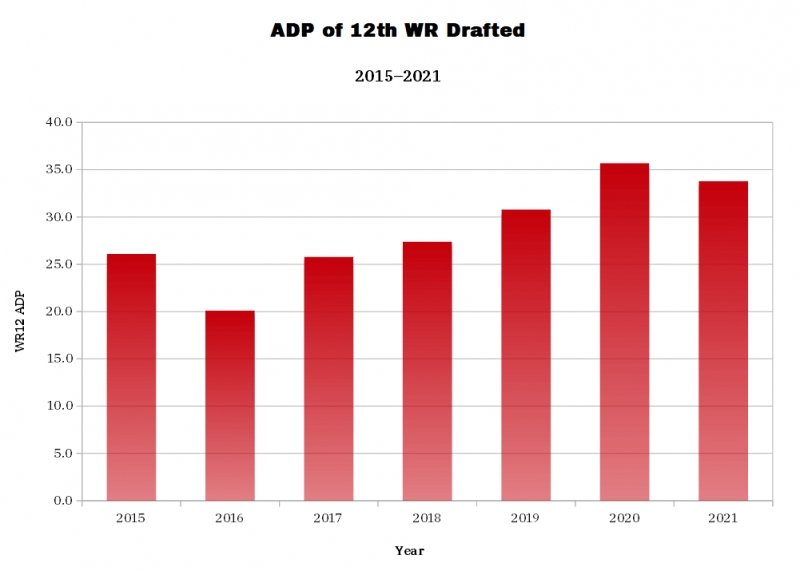 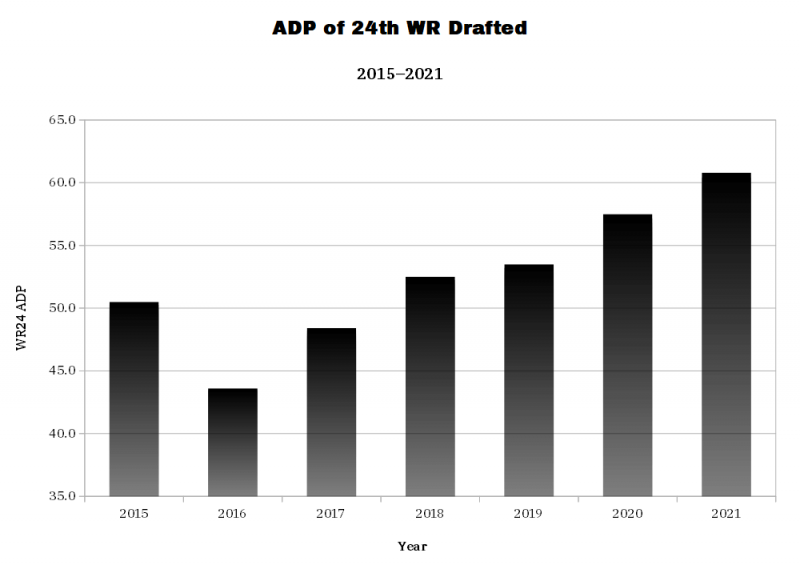 The drop in ADP for top-12 wide receivers is justified, as there’s a waning number of truly elite pass-catchers. Consider that in 2015, 13 players saw a target share of at least 25%; by 2019, that number was down to nine; only seven wide receivers eclipsed a 25% share last season. Of course, those targets have to be distributed somewhere and the mid-tier wide receivers have benefited. Recent scoring trends at the position reflect this. 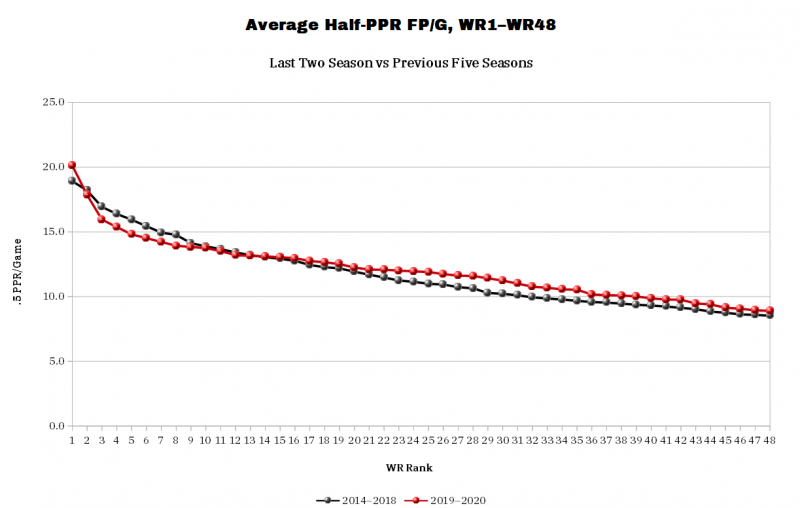 Although the recent change in wide receiver scoring is subtle, it’s far from insignificant. The gap in scoring between the WR12 and WR36 was roughly four half-PPR points from 2015–2019. Over the last two seasons, that difference has fallen a full point, with the average WR36 posting over 10 half-PPR points per game. In other words, the wider distribution of targets among wide receivers has resulted in a flatter scoring curve at the position, or more players closer to the top. This means more usable wide receivers and a deeper pool on draft day.

With running back ADP soaring despite data that suggests RB2s and RB3s being a poor investment, there’s a tremendous opportunity for fantasy managers to load up on receivers in Rounds 3–7 of drafts and stockpile players with WR1 upside and every-week starter floors. In point-per-reception leagues or leagues that start three wide receivers, this draft strategy is especially effective.

Tight End Is as Volatile as Ever (Except at the Top)

The tight end position is capitalism at its finest—there are the haves and the have-nots. In recent years, top-tier tight ends have dominated the fantasy landscape, driving up the ADP for the first three or four players at the position while fantasy managers who whiff on a Darren Waller or George Kittle are left grasping at straws.

In 2020, elites cornered the market with nearly 40% of top-six performances going to the tight ends that finished 1–5 in end-of-season scoring (half-PPR). Meanwhile, a player such as Irv Smith Jr.—last year’s TE21—had as many top-six fantasy games as Logan Thomas, the TE6. To further complicate matters, 63(!!) different tight ends logged at least one top-12 game.

Given the volatility of the position, the public has been unsurprisingly bad at predicting which tight ends will have the best seasons beyond the top four or five guys. In 2015 and 2016, five tight ends drafted outside the top 12 finished as fantasy starters. Each of the last four seasons has seen half of the top-12 tight ends carry a preseason ADP of TE13 or lower.

With running back ADP skyrocketing and fewer wide receivers commanding dominant target shares, it makes sense to prioritize one of the top tight ends. Those who miss out on a top talent are faced with a familiar conundrum—there are plenty of tight ends that could provide starter-level fantasy weeks but few have done it consistently. Even those that can post top-12 numbers semi-regularly trail the pace-setters by a huge margin.

The advantage at tight end is at the top and fantasy footballers should draft as such when possible.