Hindsight truly is 20/20. Zaccheus Malik Moss was the perfect pick for the Buffalo Bills.

The Bills' 2019 season, its successes and failures, set the blueprint for how they’ll operate as Josh Allen continues to develop. Buffalo had a 57.2% passing rate in neutral game scripts (15th in the league). That rate dropped to 48.8% in the red zone. Buffalo’s team is built around Josh Allen’s shortcomings as a passer. Whatever the issue, the Bills got it covered.

His erratic nature as a passer? Newly acquired Stefon Diggs had an 88.3% catch rate on targets of 10 air yards or less.

Concerns regarding teams taking the lead after his turnovers or failed drives? Buffalo’s defense allowed the second-fewest points per game and the sixth-fewest first downs per game in 2019.

Devin Singletary was unable to wrestle the starting job away from the immortal Frank Gore last season. When Gore’s contract expired, his 26 red zone attempts were up for grabs with the assumption being it was Singletary’s time to command the backfield. That was until the 86th pick in the 2020 draft.

Zack Moss encompasses what the Bills need and how they intend to win. He’s not perfect, but fantasy production is a function of both talent and situation. I looked at Moss’ college production and film to see what we can expect in his rookie season. He’s got some warts, but he’ll be a useful asset in 2020.

Draft (Capital) rules everything around me. D.R.E.A.M. Get the money. Dolla dolla Bills y’all.

It’s our largest proxy on fantasy production. Higher draft capital begets opportunity. Opportunity begets fantasy points. I went back to the 2015 draft class and looked at fantasy points per game for each rookie running back. Moss’ third-round selection puts him on stable ground. 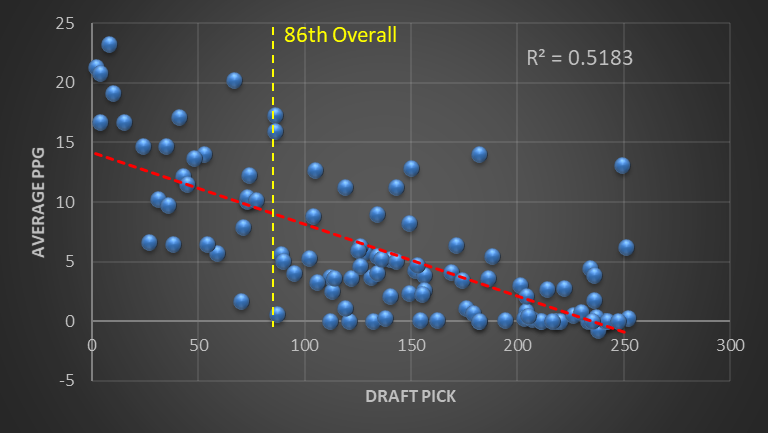 We can see the range of outcomes start to widen as more picks are made. The certainty of first-round talent and situation gives way to, well, uncertainty. From a purely draft capital perspective, Moss’ comparisons include:

Injuries sabotaged Foreman’s rookie season giving credence to the idea that the 86th-overall pick isn’t a bad place for running backs. They just need to find the right situation. We’ve already established Buffalo has a positive situation given their passing rates and lack of competition in the backfield. Moss will be given the opportunity to produce. The only question is if he can.

We can look at his compiled stats and be amazed. Moss holds the University of Utah record for most 100-yard rushing games, career rushing touchdowns and total touchdowns scored. He totaled 4,067 yards during his collegiate career despite ending his freshman campaign with only 382 yards. But Moss was the ninth running back off the board for a reason. Speculating on better team fits for the running backs selected ahead of him, or Buffalo wanting to trade up for him only get us so far. However, there is a metric that points us in the right direction.

Most among any RB with 150+ carries in a season since 2014. pic.twitter.com/UZuOBu5qnN

Forced missed tackles give us an idea of what the runner does outside of offensive line blocking. It removes some of the narratives and noise surrounding college prospects. Moss with a 38% forced missed tackle rate (more than many prospects before him) emphasizes athletic traits that may not show up in athletic testing. To confirm, I went through a few of his games and highlighted his strengths and weaknesses.

The Race to the Edge

Moss’ strength as a runner comes with his power. His ability to generate momentum at 223 pounds and punish defenders is one of his greatest traits. But he can’t accelerate like Jonathan Taylor or D’Andre Swift. Or, better put, he can’t sustain that acceleration long enough to beat defenders to the edge.

Time spent in the backfield avoiding defenders or skating to the sidelines nullifies Moss as a runner. He can throw a stiff arm and shirk a single tackler, but, by then, the cavalry is already on its way. As we’ll get into with his strengths, interior runs are where Moss wins. Luckily for him, Buffalo called inside or off-tackle plays for Devin Singletary and Frank Gore on 87.4% of their attempts. So, while we can’t expect him to take an outside pitch to the house, it’s clear that the Bills had a role in mind for Moss that emphasizes what he does best. Get him the ball and point him forward.

The prevailing narrative surrounding Zack Moss is that he’s the short-yardage, goal-line option. He’s 20 pounds heavier than Singletary and FB Patrick DiMarco only had three carries last season (and at least one target). But size alone isn’t everything. You need speed or time to generate speed, in order to leverage that size. In this respect, where it counts the most, Moss’ tape comes off uneven.

A couple of successful punch-throughs, but several stops at the line. We already identified that he needs time to build momentum and be effective. The defensive adjustments in those offensive situations aren’t conducive to Moss producing. While he may be given the opportunity, there’s a chance he may struggle to be the vulture he’s already been typecast to be.

Even good running backs struggle with balancing strength and vision. Timing when to plant that foot and zip past the first level of defenders. It’s sometimes difficult to see when that decision is made with good running backs. Blocking or poor angles by defenders can mask how that success is created. Great runners, or potentially great runners, can demonstrate the quick translation from seeing the hole to bursting it in an instant.

In the second play (at 0:07), you can see the moment Moss decides to cut upfield. He sees the blocks developing five yards ahead and instantly pivots towards the hole extending the play another eight yards. The same talent is displayed on the very next play (0:15). Here, the transition occurs immediately after the handoff. Watch his feet quickly pivot as he plants his left leg and turns inside. Upon seeing the hole, he turns his body into a battering ram after getting a four-yard runway and collects the necessary yardage for the first down. Notice that in both plays the defense is in a zone scheme to prevent the pass. A coverage type that Josh Allen saw on only 39.5% of his dropbacks. With the addition of Stefon Diggs, the Bills may see these coverages more often allowing a back like Moss to rack up yardage in short order.

I talked about Moss’ speed as a negative earlier. He needs the time and space to build momentum or else he’s stuck behind the line of scrimmage. But when he gets that time, you don’t want to be in the way.

Moss ran a 4.65-second 40-yard dash (well below the optimal 4.5 threshold for a running back), but managed to run a 4.37 shuttle. The shuttle time isn’t much better, but it at least gives us an indication he has some short-area burst. It shows up on film. You can envision back-breaking chunk runs like these in the third and fourth quarter of games to close out a win for Buffalo. What’s more, Devin Singletary only had 25 similar runs (10 yards or more) on 151 attempts in 2019. While I may have concerns about Moss taking carries in short-yardage situations, his ability to bust through a defense’s interior for breakaway carries may keep him on the field in positive situations.

We focus so much on Moss as a runner that we lose sight of his ability out of the backfield. Regardless of your perspective, real or fantasy football, the game favors the dual-threat talents. The tactical advantage presented by not compartmentalizing your personnel by function keeps the playcalling flexible to the situation. Moss offers this edge looking at his film.

Balance and Receiver Examples from Chris Allen on Vimeo.

The minimum threshold for a running back as a receiver is 25 receptions in a single season. Moss surpassed this twice. In addition, his nuanced skill as a pass-catcher is evident. In each example, he catches the ball with his hands away from his body, quickly pulls it in, and transitions to his traditional stride with the ball tucked away. His balance and body control are also on display as he adjusts to the pass and turns his eyes upfield. This is an upgrade on the Bills’ 2019 backfield as Frank Gore only earned 16 targets. Singletary received 41 targets, but there’s nothing to suggest that his role will expand leaving the door open to Moss producing in 2020.

The Bills and Zack Moss

I’ll be honest. I don’t understand Moss’ current ADP (RB49). Let me restate that. I don’t understand Moss’ current ADP relative to Devin Singletary’s (RB23). The two are being drafted as if Moss has limited or no standalone value. He’s being drafted around players lacking clarity regarding weekly usage. But there is no question in Moss’s deployment. Buffalo’s GM Brandon Beane directly stated that Moss will complement Singletary and expand on Frank Gore’s role. He also indicated that he tried to trade up for Moss in the earlier part of the third round and was ecstatic to get him at 86th overall. All signs point to him being a part of the offensive game plan starting in Week 1.

I have reservations regarding his athletic profile. However, he’s in an envious situation. Buffalo turns to the run in the red zone and they jettisoned his only challenger to the ‘1B’ role. We’ve come to the intersection of football talent and fantasy situations. Let’s bring it all home.

Player Profiles
Dak Prescott: On the Rise and Stacked With Fantasy Assets

Player Profiles
Jonathan Taylor Will be a Workhorse But Will it be in Year One?